Test Your Knowledge Of The Ramayana With This Quiz

A religious and moral romance whose main characters represent ideal types, the Ramayana has inspired Indians for more than 2,000 years. Test your knowledge of the famous epic with this quiz 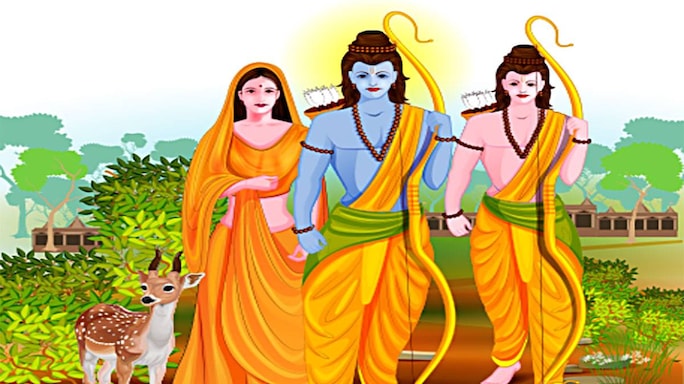 1. Which of these poets produced a much-acclaimed version of the Ramayana?

3. Match the personalities with the following statements:

i. Seduced by Indra, she was cursed by her husband to lie as a stone in his ashram.

iii. She poisoned her queen’s mind leading to Rama’s banishment.

iv. He informed the monkey’s search party that Ravana had carried away Sita to Lanka.

v. He leapt at the sun and was wounded on the left cheek by Indra’s vajra.

vi. She entertained Rama and Lakshmana with fruits in her ashram.

4. Distances in the Ramayana are mentioned in yojanas. One yojana is approximately:

a. King Janaka performed a great yagna after which he was blessed with a daughter, Sita.

b. Ravana was an exponent of the veena.

c. Hanuman’s leap to Lanka was made from the top of the Mahendra hill.

d. Jambavan was a great monkey king in Rama’s army.

6. Rama sent his signet ring to Sita through Hanuman. What did she send him back through the same messenger?

a. a lock of her hair

c. beads from her necklace

d. her choondamani (jewel worn on her head)

7. Link the heroes with their achievements in the Ramayana war:

i. He identified the rakshasa warriors to Rama.

ii. He supervised the construction of the bridge to Lanka.

iii. He was Rama’s personal messenger to negotiate peace with Ravana.

iv. He escaped from the clutches of Kumbhakarna by biting his ears and nose.

8. Who provided Rama with a chariot during the final battle against Ravana?

9. Some heroes in the epic suffered because of curses inflicted on them. Match the heroes with the curses:

a. Kabandha b. Kumbhakarna c. Vali

i. He would sleep for months at a time.

ii. He would die if he set foot on Rishyamook mountain.

iii. He was turned into a monster with- out a head, with his mouth on his stomach and one eye on his chest.

10. During Rama’s exile, what did Bharata keep on the throne?

2. a. A tricky one. Sagittarius could mislead you. Five marks if you got it right.

If you scored less than 10, you owe yourself the pleasure of re-reading the epic. Between 10 and 30 is average, while between 31 and 45 is a good score. Any- thing above that represents an epic performance!

Do You Like This Story?
50
8
Other Stories
Please enter valid text
corona updates
Must Reads
Latest Issue