It’s a hot summer morning in Maharashtra's Jhadpoli village,100 kms north of Mumbai. Manoj Bumbe, a fifth standard student, rides barefoot down a mud road, pedalling furiously on his yellow bicycle. In contrast to the grimy little boy, the bicycle looks shiny new, although it isn’t. What matters is that Manoj can now ride the distance to his school in Alonde, two km from his home. Before he got the bike, he had to walk for almost two hours every day.

Manoj swerves to avoid a brood of chickens that scuttle into his path from the house where 17-year-old Renuka Vishwa Nemale lives. A shy, soft-spoken, 10th-standard student, she too has a cycle now, a red one. “Walking to school was tiring. Sometimes I reached late and had to stand outside until the class ended,” Renuka recalls. “Some days I even missed school to avoid the long walk. But ever since I got my bike, I found more time to prepare for my SSC exams.”

Renuka and Manoj, like a few dozen other children in Jhadpoli, were given free bicycles through a voluntary scheme started last year by Hemant Chhabra, a friendly 47-year old Mumbai businessman who simply calls it ‘The Bicycle Project’. The bikes were all disused or rusted old ones that privileged city kids in Mumbai had discarded. Chhabra gets them meticulously repaired and painted before giving them away.

Chhabra started this project with his wife Sangeeta and Simona Terron, a journalist friend. A college dropout, Chhabra tried his luck at several businesses, including leather export and children’s camps, before settling down as a manufacturer of eco-friendly bags a decade ago. He also took frequent breaks to visit his organic farm in Jhadpoli, where he grows fruits and vegetables. During one such trip last year, while waiting at the village bus stop, Chhabra watched kids walking to school in the rain, and his mind raced back to his own childhood. Years ago, Father used to tell me how difficult it used to be for him to walk for hours to his school, he remembered. But why do children need to do this today? Chhabra’s farming experience had taught him that almost anything could be recycled. “So it bothered me when I saw bicycles lying unused for years around residential buildings in Mumbai,” he says, “and as I watched those village children trudge to school, I saw a connection.”

Helping people isn’t something new for Hemant Chhabra. As a youngster, he used to hitch rides to college. One kind gentleman actually started waiting for Chhabra everyday to give him a lift on his motorbike. When in Jhadpoli, Chhabra pays forward that gesture by filling his car with villagers going to market.

With Simona’s help, in October last year, Chhabra drafted an email requesting people to donate their old bicycles to village kids for whom they wrote, “going to school is the most important thing and which is why no distance is too long … and missing school is not an option.” The email was sent to everyone in their address books from where it kept getting forwarded to friends and friends of friends.

The response was amazing. Thanks also to Simona’s media contacts and a few articles she got published in Mumbai’s newspapers, by January, Chhabra received cash donations and68 bicycles. Chhabra’s offer to give these bicycles to schoolchildren was welcomed at Sri Binoi Gardi Swajan Vidyalaya, the school that Manoj and Renuka attend. 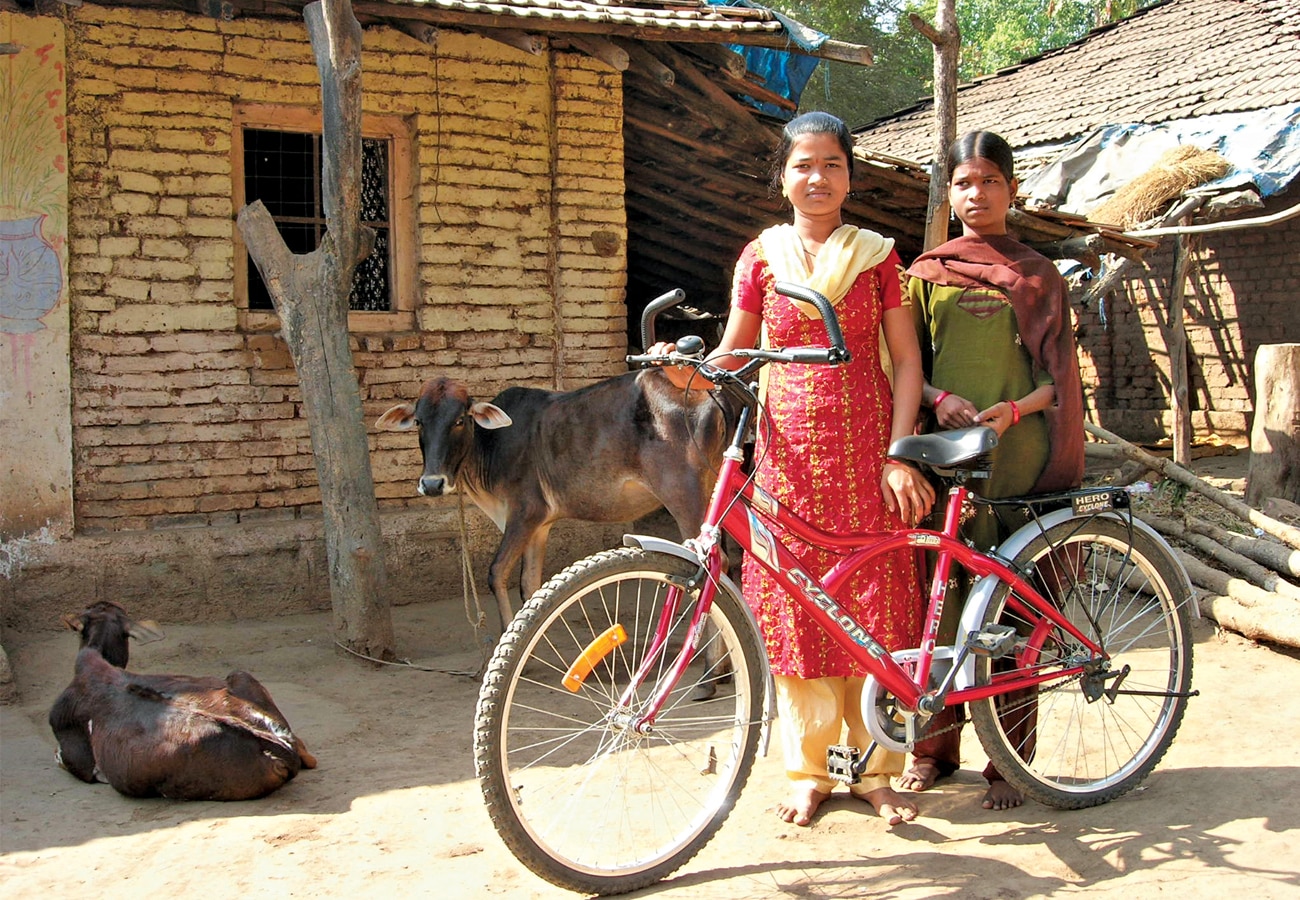 But there was still much to be done. First, the bikes had to be collected from the donors at a date and time convenient to each of them—and that took a month. “Even my transport contractor backed out after seeing how tiresome it was to collect bicycles from different parts of the city,” sighs Chhabra. “I then managed to take days off work because of the recession and the sharp drop in orders for my bags, picked up the bicycles myself, hauling them down the staircases of multi-storey buildings and getting them to where I live.”

That wasn’t all. These kids aren’t begging for charity so the least we can do is treat them with respect, thought Chhabra. Those bikes had to be as good as new. Using the cash donations, Chhabra got each bike repaired and repainted, their worn-out parts replaced. All this was done at a neighbourhood repair shop owned by one Nazim, who proved to be “an honest ally”, as Chhabra describes him. At first, Nazim thought this would be too much to handle, but when Chhabra told him about the project, the young man was thrilled because it would help school kids somewhere. “I have a little brother in school,” Nazim told Chhabra, “and how I want him to get a good education!” Nazim manages all repairs for Chhabra after his regular hours at a subsidized rate.

Meanwhile, that school in Alonde with 900 students soon shortlisted 137of them for Chhabra’s bikes. But with only 68 refurbished bikes, he had to make tough decisions. Chhabra picked the ones who walked the furthest. He also considered their class performance and attendance records before deciding on who would be given bikes on Republic Day. “The other 69 children will also get bikes as soon as possible,” promised Chhabra.

The Bicycle Project has grown quickly and Chhabra reveals that there are now about 300 bikes waiting to be picked up from various Mumbai families. Meanwhile, the project is also taking part in Delhi and Pune with bike collection centres coming up in those cities as well. A few volunteers have come forward to help. “Soon the children in villages around Pune and Delhi too will receive bicycles,” says Chhabra.

“I feel a real sense of joy when I went back to Jhadpoli recently and watched some of those children pedalling to school,” beams Hemant Chhabra. “You know, a few of them have even grown taller since they got their bikes. Who among us has not felt that the world lacks champions? That courage, idealism, a giving heart and selfless public service are rare in today’s world? Over the past 100 years, Reader’s Digest has believed otherwise. That there are heroes who live among us—everyday people, often faced with enormous challenges themselves, who chose a life less ordinary, changing the world a little or a lot, in the process.

The story of Hemant Chhabra, first published in the 2009 edition of RD India, is perhaps one of our most favourite examples. Since this article came out, The Bicycle Project received widespread support from students and professionals to corporates, schools and more over its 12-year existence.

Between logistical challenges, the trials of the pandemic and a proliferation of similar programmes, The Project diminished by 2019,after serving multiple schools and thousands of school children. Ten years ago, Hemant Chhabra moved back to his family farm outside Mumbai, but continues to get calls from donors keen to contribute. “The Project may not be around, but I’m always there to help the right people connect and take this wonderful effort forward,” he says.