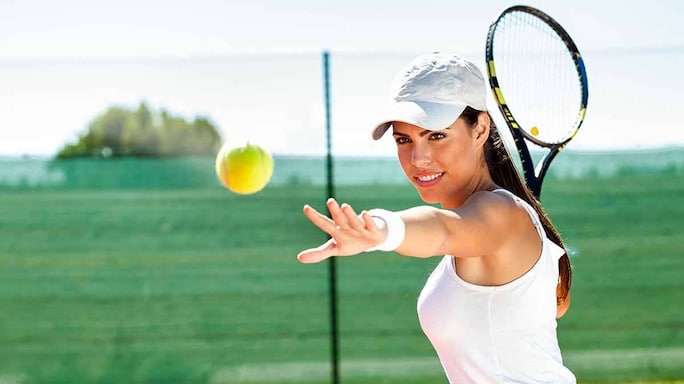 The more activity you can do that also engages your brain, the better. (Photo: indiapicture)

Exercise is a physical cross­word puzzle, says Mumbai-based fitness trainer Huzefa Lokhandwala. The more activity you can do that also engages your brain, the better. These can involve reaction training (such as playing tennis or racquetball), memorising choreography (like you would in step class or Zumba) and changing direction (common in step, kickboxing and dance classes). Mindful exercises like yoga and Tai Chi are a good way to engage the brain and keep it active. University of Oregon researchers found that inte­grative body-mind training—which is a meditation technique—can actually result in brain changes that may be protective against mental illness. The meditation practice was linked with increased signalling connections in the brain, something called axonal density, as well as increased protec­tive tissue (myelin) around the axons in the anterior cingulate brain region.

Hot flushes, foul mood swings, insom­nia, dryness in the wrong places. . . If your oestrogen levels are dropping with age, you need no primer on the symptoms. You can, however, use the latest research to turn life’s corner with a little less upheaval. Dress in layers that you can shed if needed. Avoid hot drinks, spicy foods, high temps and caffeine—they all can trigger hot flushes. And losing weight (easy, right?) may help. Thinner women have fewer flushes than those who are overweight.

Cinnamon is a no-brainer addition to your never-ever-get-sick arsenal. Among an array of natural plant extracts, only cinnamon inactivated the virus Phi X 174, shutting down 99.9 to 100% of the bug in minutes, found researchers at Touro College in New York City. While Phi X doesn't infect humans, it's similar to viruses we do encounter, like those that cause nasty colds, flu, and even herpes, says microbiologist Milton Schiffenbauer, who led the study. Before more research nails down specifics, he suggests warding off the season's oncoming threats with about a tablespoon of cinnamon a day. So include 1 Tbsp cinnamon in your daily diet to keep seasonal flu, cold, and cough at bay.

Meditation is a great way to a calmer you. Even 15 to 20 minutes of sitting in silence will make a world of difference. Sit in a comfortable position with your spine straight, close your eyes, relax your body and mind, and focus on your breath. Let the thoughts come and go without being involved, irritated or judgmental towards yourself. The restless nature of the mind will calm down over a period of time.

Indians tend to have darker skin on their elbows and knees. “The only way to fix this is to moisturise regularly using a mosituriser containing Vitamin E, Hyalu-ronic acid or ceramics,” says Dr Chytra V Anand, cosmetic dermatologist, Kosmoderma Clinics, Ben­galuru. Along with this, use a lotion that contains a skin exfoliating and de-pigment­ing agent like glycolic acid daily at night.