The Fragrance Of A Graceful Life

The author fondly remembers her grandmother, who was an inspiration for her The call came at 9.00 pm on a stuffy summer’s night amid the COVID-19 lockdown. My cousin urgently conveyed that Ammaaji, our 92-year-old grandmother, was on the brink. Applying for an inter-district travel pass online, I immediately left Bengaluru for Mandya, my grandmother’s town, picking up a cousin enroute.

I was sent to live with my grandparents, when I was barely 10 months. Growing up away from my parents, my grandmother’s affections and her innately gentle, non-judgemental ways steadied many a childhood anxiety. I sometimes shared her bed as a child and she would sing AadisidaLeshode Jagadodhaarana, her favourite devaranaama by Sri Purandara Dasaru, gently patting me and lulling me to the land of dreams.

My grandmother was married to my grandfather at 14—and he was 14 years older. Theirs was an ideal union built on a bedrock of love and mutual respect, even if it was a study in contrasts. My grandfather hailed from a well-to-do, landed family in the village of Mogenahalli. He studied Law at Pune’s Fergusson College, was erudite, maintained a well-stocked library and kept journals all his life.

Ammaaji was from Mysuru and barely made it to fourth grade. She lost her parents early and was raised by an aunt. Modest and even-tempered, she ran a large, efficient household, always a loving wife and mother, and an excellent cook and hostess. She had a passion for plants and bagged prizes for her sprawling garden at competitions of the local horticultural society. She squirreled away savings from a cleverly managed household budget to surprise my grandfather with emergency funds when needed. 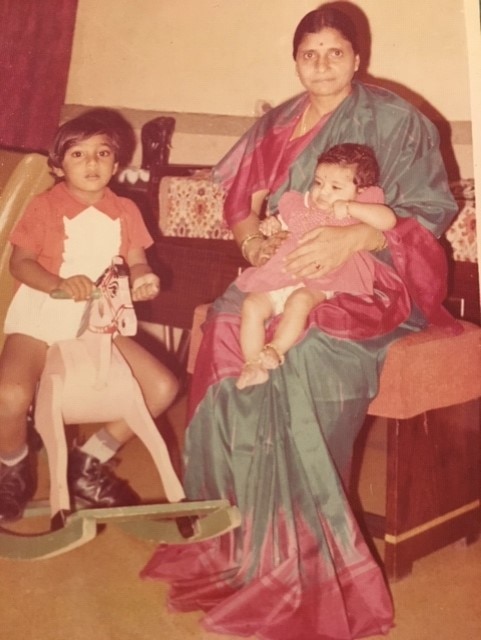 Author as a baby with her grandmother and a cousin. Photo: Ramya Coushik

Returning from outstation trips, my grandfather always brought back a delicate string of fragrant jasmine to adorn his wife’s raven locks. In February 1966, my grandfather saw his life’s dream come to fruition when the movie theatre he built in Mandya, opened to its very first show. He called it Girija, his very own monument to the love of his life.

After he passed on in 1988, Ammaaji stopped wearing flowers in her hair. I so missed the bright red kumkuma that beautified her lovely face, when she chose a smaller sticker in its place.

Together, they raised seven children and had 19 grandchildren. Without the affections of a mother, my grandmother had to depend on the kindness of elderly female relatives when she had her children in succession. But she ensured that her own four daughters received the best postnatal care, pampering and nurturing when they came to their parental home to give birth. As she aged, my grandmother gracefully handed over the reins of her domestic establishment without fuss.

It was nearing midnight when we reached Mandya. It broke my heart to see Ammaaji. Once resplendent with ruby-encrusted gold bangles and twin diamond nose pins, needles now pierced her fragile arms and tubes were thrust into her nose.

Early next morning, my Ammaaji breathed her last. The end was peaceful, like her calm, serene persona.

As she was being readied for the handful of visitors allowed to pay their last respects, I frantically searched her wardrobe for a sticker bottu for her bare forehead. I found a little diary as I scanned the shelves. A folded piece of paper slipped out. In my hands was testimony to a facet of my grandmother’s persona that I had only sparingly heard of, the loving lifeline she had extended to her less-fortunate siblings.

I had found an undated letter from my grandmother’s late older brother, a moving note of gratitude for her unstinting support that saw him through life’s vagaries, and the last worldly remnant of an endearing bond between siblings, unsullied by their starkly differing circumstances in life.

Alas, she never spoke of it and it stayed within her, just like the non-descript note hidden somewhere in the deep recesses of her wardrobe.

As with everything else in her life, my grandfather’s beloved Girija, the family’s cherished matriarch and my treasured Ammaaji left us without a fuss, self-reliant and on her feet until two days before her end, and gone in a jiffy, leaving behind a lingering fragrance of her graceful life.

The author is a software marketer and natural farmer based in Bengaluru. She blogs at www.bluejaydiaries.com

Do You Like This Story?
23
0
Other Stories
Please enter valid text
corona updates
Must Reads
Latest Issue