Rana Safvi Brings Alive Stories Of Love, Loss and Betrayal From Within The Red Fort When Aurangzeb built the bastions and fortifications around the Lahori Gate in the Red Fort, Shah Jahan, then under house arrest, wrote to his son: “tumne toh dulhan ko ghoonghat pehna diya (you have drawn a veil over the bride)!” The constructions were made for the convenience of the nobles who entered the fort for an audience with the emperor. Previously, the emperor had an unobstructed view till the Fatehpuri Mosque (opposite Red Fort, on the opposite end of Chandni Chowk, Delhi), and since the rule decreed that as far as the emperor’s sight stretched, no person approaching the fort should be seen mounted, the people had to walk quite the distance to get to the fort. Aurangzeb’s thoughtfulness certainly saved people a lot of trouble, but it also marks what, in my opinion, would become a significant theme in the fort’s history: a profound and continuing sense of unmitigated loss.

One fine January morning, a few journalists and I found ourselves sensing this love and loss while wandering around the Red Fort complex, trying to fathom what it once was and what had remained of it. Our guide for the walk was Delhi-based writer-historian Rana Safvi, who is a great raconteur of stories contained within the walls of the fort. Her latest book, City of My Heart: Four Accounts of Love, Loss and Betrayal in Nineteenth-Century Delhi, is a translation of four Urdu narratives recounting the twilight years of the Mughal empire in the run up to the uprising 1857 and describing the ways of life in a city (Delhi) long lost to us. Entering the fort through the Lahori Gate, we soon came to the Chatta Chowk, which is widely considered to be the first covered bazaar in India. Legend has it that Shah Jahan saw a covered market in Kabul and was sufficiently impressed by it to recreate it within the (Red) fort. This was certainly a novelty in the Mughal era as most of the markets of their time (in India) were open-air. According to Safvi, the Chatta bazaar in the Red Fort was quite lavish during Shah Jahan’s time—it catered to the royalty and traded in gold, silverware, gems, jewellery and precious stones. Today, however, that grandeur seems to be lost—the shops in the area trade in general goods, clothes, art pieces and antiques. Moreover, the original look of the passageway was altered when the arches were walled up. The ceiling, which was originally painted, looks barren and devoid of any of the erstwhile motifs. Fortunately, sections (of the ceiling) and some of the crumbling walls and arches still preserve a few traces of the symbolic floral design that once dotted the structures in the compound. Chatta Bazaar as it may have looked in the 1850s After crossing the covered passageway, we arrived at an open court, which marks the intersection of the east-west and north-south paths of the fort. This open court leads to the Naubat Khana (also called the Naqqar Khana) or the drum house. This is now an isolated structure, but in the days before 1857, a courtyard ran beside it. Both the courtyard and the central tank were destroyed by the British after the rebellion. Originally constructed with red sandstone and now covered with lime plaster, the Naubat Khana once boasted of exquisite floral designs carved in the sandstone and possibly painted in gold—and even though the walls still bear some of the motifs, the beauty of the craftsmanship in gold has long been lost.

In its heyday, the Naubat Khana must certainly have been a very musical affair. The court’s musicians used to announce the arrival of the emperor in the Diwan-i-Aam (the public audience hall) from here, and they also used to play music daily at specific times to mark the prahars (a unit that corresponds roughly to three hours in a day). Naubat Khana, with the courtyard and tank, before its destruction in the 1850s 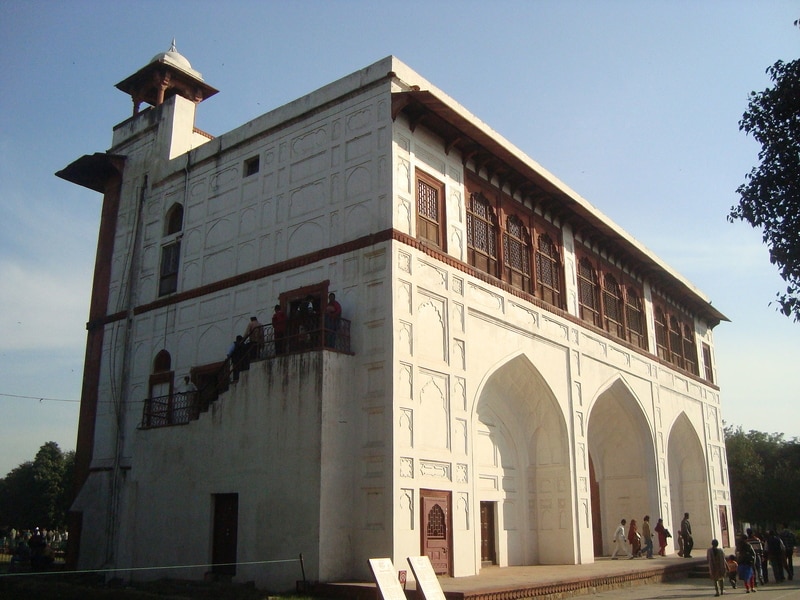 If you were to see the Diwan-e-Aam today, you’d probably be unable to fathom how costly an affair it must have been during the Mughal era. Another open courtyard separates the Naubat Khana from the Diwan-e-Aam. A hall open on three sides, the Diwan-e-Aam consisted of several arches the beams of which were all made of sandstone. They are heavily engraved, but what’s even more impressive is the fact that the ceiling and the columns were, once again, all painted in gold during the Mughal era. Fortunately, the Diwan-e-Aam is one of the few structures that have been preserved somewhat, and while it’s no longer possible to see its golden splendour, the walls, the arches and the columns retain sufficient evidence of the superb art at display. The emperor used to appear before his audience, on his throne, towards the back of the Diwan-e-Aam on a raised marble canopy—a jharokha for holding a durbar (reception) for the public. The people used to await the emperor’s arrival in long queues in the courtyard where today, lawns have been laid. The ceremony used to be an intricate one. The emperor sat on his throne, away from his courtiers, separated by a gold railing on one side and silver ones on the remaining sides. The petitioners, who were escorted inside, stood on a marble platform with precious stones, while petitioning. Apparently, the emperor’s pedestal was so high that they had to look up even while standing on the platform, while the emperor gazed down on the people. However, since the emperor was not god, rather, ‘the shadow of the god’, it was ensured that the imam’s pulpit at the Jama Masjid (which was built later) was built at a higher level than the emperor’s throne here. Behind the marble canopy was a balcony, the walls of which were inlaid with multi-coloured stones representing flowers and birds, done ostensibly by a reputed Florentine jeweller, Austin de Bordeaux. Thankfully, this panel (the Orpheus panel), replete with the bird and floral motifs, can still be seen today—it was all restored before the 1911 durbar. For the commoners, the Diwan-e-Aam was the farthest they could go inside the Red Fort complex. Beyond this, lay the imperial quarters where the emperor, his harem and their families stayed. Apart from the uppermost echelons of the royalty, this region was accessible only to nobles and people of a very high stature. On our tour through the region, Safvi informed us that the quarters were constructed based on the Islamic idea of a paradise. It’s not surprising, therefore, that the sense of loss is most keenly felt here. The centrepiece of the imperial quarters was the Nahr-e-Bishist (Stream of Paradise), a canal running through the centre of the raised pavilions on which the various apartments housing the emperor and his family were built. Water was raised from the Yamuna into the tower and then fed into the Nahr-e-Bishist which circled the living quarters.

The Mughals certainly did not hold back when it came to the recreation of paradise. In the Rang Mahal (then called Imtiyaz Mahal), for instance, the ‘stream of paradise’ flowed into a marble basin carved into the floor. Camphor lamps were placed in niches in the walls especially at night-time as a result of which an intoxicating smell spread through the apartment and outside. The structure itself was a colourful one, and one may only possibly imagine how it may have looked back then. Floral designs abounded, as did paintings and decorations, and the ceilings in some sections were decorated with mirrors. The Rang Mahal, which housed the imperial harem, also had a basement (tehkhana) which was frequented by the women during summer. Suffice to say that floral designs notwithstanding, subsequent restorations and reconstructions have been unable to replicate the original look and feel. Rang Mahal in the 1850s (Painting by Ghulam Ali Khan) Beside the Rang Mahal was the Khas Mahal, the emperor’s quarters, with a tower towards the east (called the Muthamman Burj) where the Emperor held jharokha darshan (visitations from the balcony) early in the morning. Here, everyone, be they high or low, had access to him and could address their grievances to him. Rich floral designs decorate the marbled interiors and a section of the ceiling and the inset of the arched roof was once gilded with gold. Here, the emperor used to sleep in the chamber called the khwabgah (Urdu for bedroom) while a servant (possibly a eunuch) fanned him from outside the room and a storyteller told stories. Again, a lack of planned maintenance has doomed this important quarter, which once housed the scale of justice. While some sections are already crumbling, the rest of the walls are a mixture of plaster and discoloured marble. The golden ceilings and inset were restored twice—first with Burmese teak and then with plaster—a far cry from what it originally was. 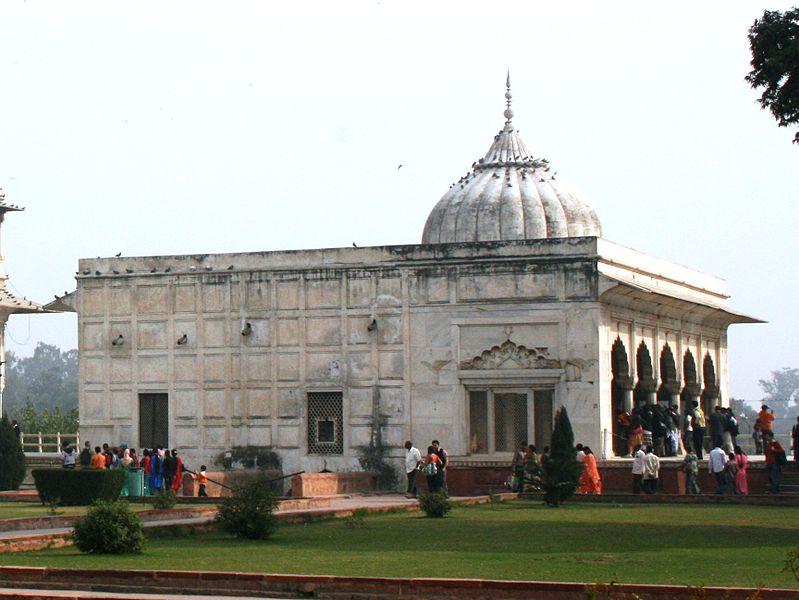 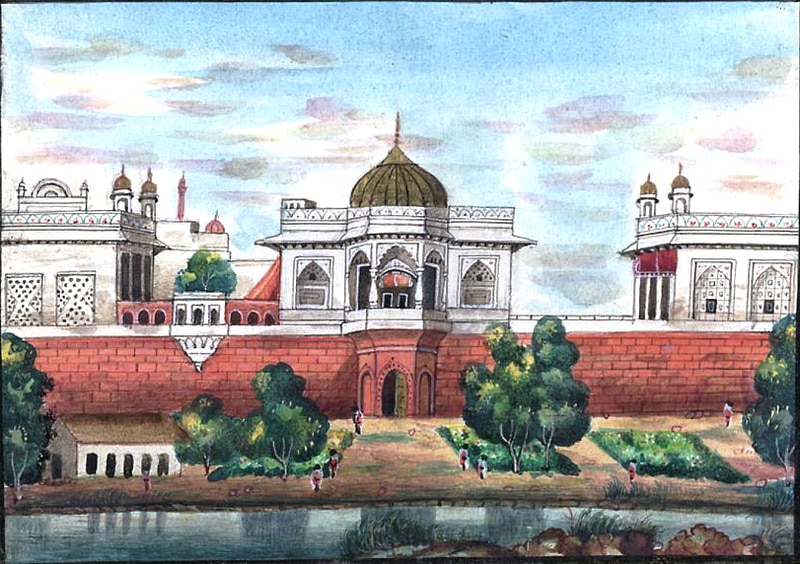 In its glory days, the Diwan-e-Khas (Hall of Private Audience) was widely held to be one of the best and most beautiful examples of Islamic architecture anywhere in the world. It was indeed an exquisite affair—its ceilings inlaid with gold and silver, the piers supporting the arches made of marble with floral designs and also painted and gilded near the top. The building also had red awnings, and it once housed the Peacock Throne with the Kohinoor; the throne was later taken away by Nadir Shah, the Persian adventurer who invaded Delhi. The majestic splendour is well encapsulated on the corner arches of the northern and southern walls, which has the following inscription by Amir Khusrow: Agar firdous baroye zameen ast, hami asto, hami asto, hami ast (If there be a paradise on earth, it is this, it is this, it is this). Today, bereft of the throne, the Kohinoor, the silver and gold ceilings, and the shamianas, the Diwan-e-Khas is a shadow of its past, with only Khusrow’s couplet mourning the loss of this paradise. It is quite fitting that the one connecting ‘stream’ in this paradise would also dry up gradually over the years. Diwan-e-Khas with red shamiana, around 1817 Depiction of the Peacock Throne in the Diwan-e-Khas Quite predictably, Safvi’s account of the history of the Hayat Baksh Bagh was a familiar one of destruction and lost beauty. The garden, the largest in the complex, was planted with blue, purple and white flowers throughout, and the women used to visit the garden, often frolicking with their companions and each other. Major portions of this garden were destroyed by the British after 1857, and rebuilt into stone barracks. Adjacent to this garden was the Mehtab Bagh, a perfume garden populated with white flowers, which often created the illusion of snow having fallen. This special bit of ‘paradise’ was also completely destroyed by the British after the 1857 rebellion, who went on to build barracks for the soldiers there.

One can therefore sense an unmitigated loss and even despair while witnessing the sad history of the Red Fort—a loss which isn’t just limited to the beauty and splendour of certain architectural structure. The events of 1857 also hastened the ultimate destruction of the ways of life and behaviour of a certain once-thriving society—a unique ecosystem—cloistered within the walls of a fort. In portraying this change, the British no doubt emerge as absolute villains and the agents of complete destruction of a culturally-significant society. But the fact that we have still not been able to recover from such a significant loss years after independence does point to the shortcomings and lack of planning in our restoration and reconstruction efforts, perhaps also to a certain lack of acknowledgement and respect towards the fort and its significance. It would perhaps not be wrong to appropriate Khusrow’s couplet thus: “If there be a paradise lost on earth, it is this, it is this, it is this!”