The farewell speech of the 44th President of the United States, on his last day in office 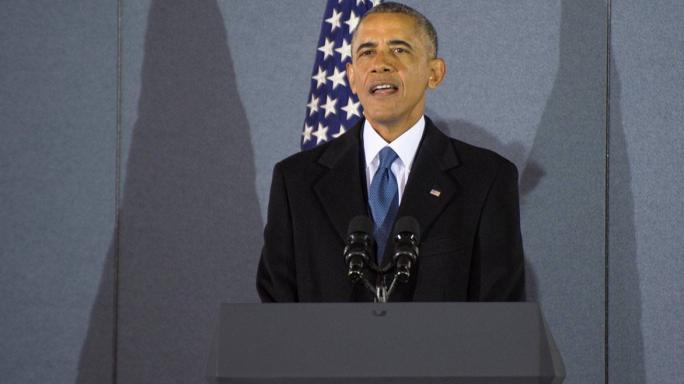 Tonight it’s my turn to say thanks. Whether we’ve seen eye-to-eye or rarely agreed at all, my conversations with you are what have kept me honest, kept me inspired and kept me going. Every day, I learnt from you. You made me a better president, and you made me a better man.

It was on the streets where I witnessed the power of faith and the quiet dignity of working people in the face of struggle and loss. This is where I learnt that change only happens when ordinary people get involved, get engaged and come together to demand it.

After eight years as your president, I still believe that.

It’s the conviction that we are all created equal, endowed by our creator with certain unalienable rights, among them life, liberty and the pursuit of happiness.

It’s the insistence that these rights, while self-evident, have never been self-executing; that we, the people, through the instrument of our democracy, can form a more perfect union.

Yes, our progress has been uneven. The work of democracy has always been hard, contentious and sometimes bloody. For every two steps forward, it often feels we take one step back. It’s up to all of us to make sure our government can help us meet the many challenges we still face.

We have what we need to do so. Our youth and drive, our diversity and openness, our boundless capacity for risk and reinvention mean that the future should be ours.

But that potential will be realized only if our democracy works. Only if our politics reflects the decency of our people. Only if all of us, regardless of our party affiliation or particular interest, help restore the sense of common purpose that we so badly need right now.

That’s what I want to focus on tonight—the state of our democracy.

Understand, democracy does not require uniformity.

There have been moments throughout our history that threatened to rupture our solidarity. The beginning of this century has been one of those times. A shrinking world, growing inequality, demographic change and the spectre of terrorism—these forces haven’t just tested our security and prosperity, but our democracy as well. And how we meet these challenges to our democracy will determine our ability to educate our kids, and create good jobs, and protect our homeland.

In other words, it will determine our future.

Our democracy won’t work without a sense that everyone has economic opportunity.

That, after all, is why we serve—to make people’s lives better, not worse.

But for all the real progress we’ve made, we know it’s not enough. Our economy doesn’t work as well or grow as fast when a few prosper at the expense of a growing middle class. But stark inequality is also corrosive to our democratic principles. While the top one per cent has amassed a bigger share of wealth and income, too many families have been left behind, convinced that the game is fixed against them, that their government only serves the interests of the powerful—a recipe for more cynicism and polarization in our politics.

There are no quick fixes. I agree that our trade should be fair and not just free. But the next wave of economic dislocation will come from the relentless pace of automation that makes many good, middle-class jobs obsolete.

And so we must forge a new social contract—to guarantee all our kids the education they need; to give workers the power to unionize for better wages; to update the social safety net to reflect the way we live now and make more reforms to the tax code so corporations and individuals who reap the most from the new economy don’t avoid their obligations to the country that’s made their success possible. We can argue about how to best achieve these goals. But we can’t be complacent about the goals themselves. For if we don’t create opportunity for all people, the disaffection and division that has stalled our progress will only sharpen in years to come.

There’s a second threat to our democracy. Race remains a potent and often divisive force in our society. Race relations are better than they were but we’re not where we need to be. All of us have more work to do.

Going forward, we must uphold laws against discrimination—in hiring, in housing, in education and the criminal justice system. But laws alone won’t be enough. Hearts must change.

Regardless of the station we occupy, we have to try harder; to start with the premise that each of our fellow citizens loves this country just as much as we do; that they value hard work and family like we do; that their children are just as curious and hopeful and worthy of love as our own.

None of this is easy. For too many of us, it’s become safer to retreat into our own bubbles, surrounded by people who look like us and share the same political outlook and never challenge our assumptions. The rise of naked partisanship, increasing economic and regional stratification, the splintering of our media into a channel for every taste—all this makes this great sorting seem natural, even inevitable. And increasingly, we become so secure in our bubbles that we accept only information that fits our opinions, instead of basing our opinions on the evidence that’s out there.

This trend represents a third threat to our democracy. Politics is a battle of ideas; in the course of a healthy debate, we’ll prioritize different goals, and different means of reaching them. But without some common baseline of facts, without a willingness to admit new information and concede that your opponent is making a fair point, and that science and reason matter, we’ll keep talking past each other, making common ground and compromise impossible.

Isn’t that part of what makes politics so dispiriting? How do we excuse ethical lapses in our own party, but pounce when the other party does the same thing? It’s not just dishonest, this selective sorting of the facts; it’s self-defeating. Because as my mother used to tell me, reality has a way of catching up with you.

Take the challenge of climate change. Without bolder action, our children won’t have time to debate the existence of climate change; they’ll be busy dealing with its effects: environmental disasters, economic disruptions and waves of climate refugees seeking sanctuary.

The post-World War II order is now being challenged. The peril it poses to our democracy is more far-reaching than a car bomb or a missile. It represents the fear of change; the fear of people who look or speak or pray differently; a contempt for the rule of law that holds leaders accountable; an intolerance of dissent and free thought; a belief that the sword or the gun or the bomb or propaganda machine is the ultimate arbiter of what’s true and what’s right.

Protecting our way of life requires more than our military. Democracy can buckle when we give in to fear. So just as we, as citizens, must remain vigilant against external aggression, we must guard against a weakening of the values that make us who we are. For the fight against extremism and intolerance and sectarianism are of a piece with the fight against authoritarianism and nationalist aggression. If the scope of freedom and respect for the rule of law shrinks around the world, the likelihood of war within and between nations increases, and our own freedoms will eventually be threatened.

So let’s be vigilant, but not afraid.

Which brings me to my final point—our democracy is threatened whenever we take it for granted. All of us, regardless of party, should throw ourselves into the task of rebuilding our democratic institutions. When voting rates are some of the lowest among advanced democracies, we should make it easier, not harder, to vote. When trust in our institutions is low, we should reduce the corrosive influence of money in our politics, and insist on the principles of transparency and ethics in public service.

All of this depends on our participation; on us accepting the responsibility of citizenship, regardless of which way the pendulum of power swings.

Our Constitution is a remarkable, beautiful gift. But it’s really just a piece of parchment. It has no power on its own. We, the people, give it power—with our participation, and the choices we make. It falls to each of us to be guardians of our democracy; to embrace the task we’ve been given to continually try to improve this great nation of ours. Because for all our outward differences, we all share the same proud title: Citizen.

Ultimately, that’s what our democracy demands. It needs you. Not just when there’s an election, not just when your own narrow interest is at stake, but over the full span of a lifetime. Show up. Dive in. Persevere. Sometimes you’ll win. Sometimes you’ll lose. Presuming a reservoir of goodness in others can be a risk, and there will be times when the process disappoints you. But for those of us fortunate enough to have been a part of this work, to see it up close, let me tell you, it can energize and inspire.

I am asking you to believe. Not in my ability to bring about change—but in yours. Yes, we can.

Do You Like This Story?
23
0
Other Stories
Please enter valid text
Must Reads
Latest Issue