No Child Left Behind

Built to bridge the learning divide worsened by the COVID-19 pandemic, this e-learning resource is an effective, inclusive option for all children 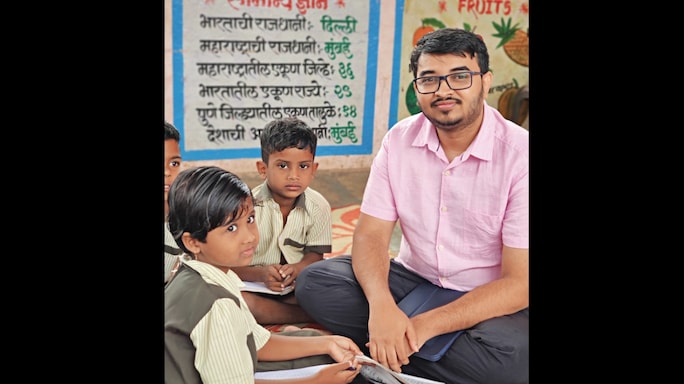 FOR GOVERNMENT SCHOOL teachers like 36-year-old Hidayatulla Barkatulla Khatik, from Jalgaon, Maharashtra, the shift to digital learning necessitated by the COVID-19 pandemic added another set of challenges to an already difficult job. “Many government school students come from homes deprived of basic resources. For these children, access to a device with enough internet data to attend live online classes was impossible. Of 50 students from my class, only four or five of them were able to be online for classes over Zoom. We needed a solution that could reach kids who were being left behind.”

Khatik is among 2,000 Zilla Parishad teachers in Maharashtra, who are part of VSchool—a website and later an app created by Vowels of the People Association (VOPA), an organisation working to provide accessible, free and high-quality ed-tech interventions, to children from low-income households.

VSchool and VOPA, according to 33-year-old founder Prafulla Shashikant, “were both born out of need.”A mechanical engineer by training, Shashikant was spearheading Kumar Nirman, an initiative involving value education of school children and young adults under the aegis of NIRMAN (founded by Padma Shri Dr Abhay Bang) when he realised that the young adults he worked with very often came from elite institutions or homes with a certain measure of social and cultural capital. “I wanted to work with adults with the same zeal but lacking similar opportunities.” With that design in mind, Shashikant quit NIRMAN and started VOPA in 2018 with sup- port from, now executive director, Rutuja Jeve, and his wife, Shilpa Hulsurkar.

Born to a Dalit family in the Beed district of drought-prone Marathwada, Shashikant’s childhood experiences seeded in him an appetite for social action. “Beed is considerably backward—female foeticide, farmer suicides, migration of landless labourers often filled the news cycle of the region. They still do.” Growing up in an atmosphere hungry for change, education— its quality, who had access to it and its opportunities were strained negotiations all around.

“For most of us, education was the only way out and our teachers—as it is with most first generation learners— were pivotal in shaping our lives. So, with VOPA we decided to focus on teacher training. Hundreds of children pass under a teacher’s influence. Nurturing educators who shape the values and minds of generations would ensure a ripple effect and serve as a sustainable model for creating larger social change.”

By 2019, VOPA began working with a few schools in Maharashtra and were onboard to scale their efforts (having secured approval from the Ahmednagar local government to provide teacher training in 25 government schools) when COVID-19 hit.

The pandemic widened the existing learning divide among children, hitting those from historically disadvantaged groups the hardest. Although VOPA had no plans to venture into edu-tech, as stories of student suicides streamed in, Shashikant and his team decided to gear their efforts towards building techno- logical muscle for digital learning, and soon the VSchool website was born.

“Our website, we decided, would be free. Everything would be in one location, no pagination, no ads and no log-in passwords. It would load on simple mobile phones and wouldn’t eat into a family’s limited data plans. Study material would be created in audio, video and text formats, all accessible offline as well,” says Shashikant.

The costliest component of the operation, however, was content creation. With a team of just four, developing relevant, error-free content in-house was a monumental ask. Government intervention, they decided, was the answer.

“We were already in touch with the Beed district government, so we went to them with the proposal of training Zilla Parishad teachers in the use of various digital tools to create educational content for SSC grades, which would then be available on our website for free”. The district collector approved and provided 15 teachers for the pilot.

Working closely with the teachers, VOPA designed their pedagogy to mimic the experience of a physical classroom. But rather than just video-based lessons, which consumed a lot of cellular data, VOPA incorporated formats such as rich formattable text, GIF files, PDF work- sheets, audio files and images, packaged in different ways. The content created was put through three levels of checks: first by a senior teacher at the Zilla Parishad level; a second round by VOPA; the combined feedback was then incorporated, uploaded on a server, where VOPA conducted a final round of checks. Their efforts soon bore fruit. “Although the pilot started in Beed, which has around 40,000 students, within two months our website had lakhs of visitors from across the country. In 2020, we reached 18 lakh users. That was a surprise because we had not really marketed the website,” says Shashikant. In the last two years, VSchool has created more than 2,800 chapters in Marathi, ‘semi-English’ [a mix of Hindi and English] and Urdu for classes one to 10. To handle the increased traffic, the VSchool app was launched in 2021. It has since seen more than 11,00,000 downloads.

Positioning Vschool as an effective complement to classroom learning, Khatik says, “Most of these children are first generation learners with limited resources, so this free platform acts as a substitute for tuitions, or parental help. It helps that the content is available in local languages.”

Citing another example of how the app acts as a learning aid, he says that, “A lot of these students struggle with their reading, so VSchool’s audio con- tent helps them read better”.

With the world taking a collective digital turn, VSchool also offers children some familiarity with the modern-day digital economy. Khatik feels that the teacher training he received from VSchool has now enabled him to utilize digital tools, such as worksheets via Google Forms or videos to explain complex concepts. “There are some lessons that could benefit from the use of a screen, but resources, even when available, are stretched in government schools. Access to a quality ed-tech resource helps students interact with the concepts in a 3D set-up. Also, it is heartening to see children from otherwise tech-ignorant backgrounds use these digital tools and resources on their own”.

This democratisation of tech allowing access to quality e-learning may just yield the social change, VOPA set out to achieve.