The war on sexual harassment rages 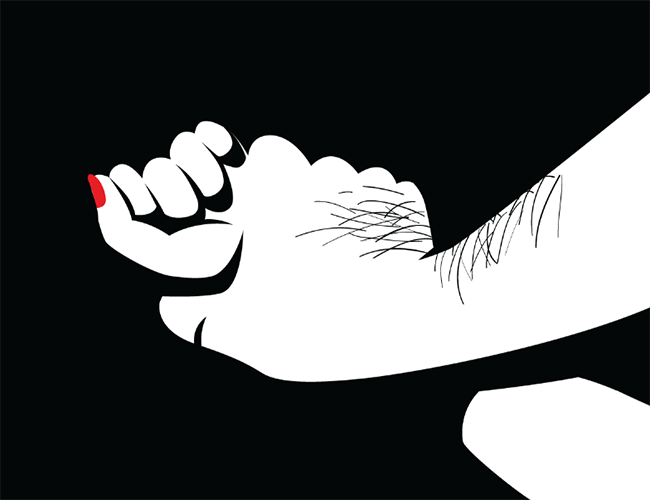 The #MeToo campaign following revelations of Hollywood producer Harvey Weinstein's grave sexual misconduct paved the way for survivors of sexual harassment to break their silence globally. Social media started buzzing with women's experiences of harassment, starting in early childhood and following them into their workplaces. The ripples were so powerful that women in different parts of the world, from different fields -- cinema, media, academics and even the social sector -- called out men on social media, through lists. Often they were names of alleged sexual harassers without details of the complaint.

As heated discussions ensued, one thing became clear: The 'name and shame' lists exposing violators, usually in positions of power, were not just a cathartic exercise. The survivors had not been heard within their institutional frameworks.

The debate on due process and lack of a responsive mechanism versus unleashing one's agency to speak out helps us look at how deep the malaise is. It also raises some very important questions. Do we need to rethink our approach of accountability? How can the corrective mechanisms, introduced through the struggles of the women's movement, be improved? It also opened up a whole new window on the nature of justice and a fair methodology of arriving at it.

Let us first examine briefly the history of these mechanisms and the discourse around sexual harassment.

The year was 1992. Bhanwari Devi, an honorary worker and a sathin (friend-mobilizer) of the Rajasthan government, was gang-raped by five landed, dominant men from the Bhateri village, near Jaipur. The rape, carried out in front of her husband, was to teach her a lesson for campaigning against the marriage of a one-year-old girl, on behalf of the state government's women's development programme. Upon pressing charges, the entire establishment, barring a few individuals, believed her to be a liar. Can there be justice if the premise of any police investigation is that the complainant is a liar? The mobilization on the streets for fair investigation led to the case being handed over to the CBI. Bhanwari stood like a rock -- she would settle for nothing short of justice.

As the government of Rajasthan refused to come out in support of Bhanwari Devi, the larger question of employer's responsibility was taken up very seriously. Five feminist organizations moved the Supreme Court in 1992 with a public interest litigation (PIL), asking the court to monitor the investigation, and praying for guidelines for the enforcement of a sexual harassment free workplace for all women.

All the accused were acquitted in the rape case in 1995, on grounds of age and caste. Twenty years on, Bhanwari still awaits the appeal challenging the acquittal to come on board the Rajasthan High Court, Jaipur bench. Twenty-five years since she was gang-raped, justice for her seems a far cry.

The 1992 PIL resulted in a judgement in 1997, popularly called the Vishakha judgement. It radically changed the discourse on sexual harassment in India, holding a workplace free of sexual violence was a woman's human right. It defined sexual harassment, bringing verbal and non-verbal abuse within the framework of violence, in addition to physical violence. It also held that it was the employer's responsibility to provide a safe workplace, instructing all institutions, public or private, to set up committees for the prevention and redressal of sexual harassment. These committees would be chaired by women, with more than 50 per cent women members and at least one member from a non-profit. The guidelines also talked of preventing sexual harassment through actions like raising awareness against such abuse to encourage a work culture based on respect and dignity.

Implementing the court orders has been difficult. The National Commission for Women took the initiative, the central and state governments amended their conduct rules. However, the private sector and the judiciary resisted. The Supreme Court itself took 15 years to set up these committees. Of course it was not enforceable in the unorganized sector in the absence of a defined workplace. Several universities put into place democratically elected committees with student representatives, called gender sensitization committees against sexual harassment (GSCASH).

It was only in the backdrop of the Nirbhaya case that Parliament passed a law on the prevention, redressal and protection of women from sexual harassment at the workplace in 2013. The definition of employee, employer and workplace were widened.

This law mandated the formation of internal complaints committees (ICC) in workplaces with more than 10 employees and the setting up of local complaints committees (LCC) with eminent women and men in every district, for institutions with fewer than 10. However, it also brought in the concept of malicious complaint, introducing punitive measures where complaints were filed with intent to harm, making the law almost counter-productive in an environment where breaking the silence on harassment is mostly met with denial. It also put the onus on the head of the institution to make these committees effective, and introduced fines if the law was not followed.

While there has been some effort to implement the law, these committees are hardly autonomous or unbiased. The role of the district LCCs need to be evaluated urgently. But mostly, these committees in the formal structures remain in control of the institution heads, in particular ICC members. Often they do not know the law; there is little training; many a times, these committees become instruments of harassment, and confidentiality is also defied. Yet, what is the alternative?

It is very important to take this debate to its logical conclusion -- of evolving, formulating and establishing newer platforms for justice -- platforms with which marginalized women can build organic relationships.

Historically, formal platforms have emerged from the struggles of women's groups. To start with, let us begin with public hearings or tribunals with a cross section of women from the movement, outside institutions or in common public spaces where violated women can speak without fear of repercussion or condemnation. This would at least bring together women and help them speak out in public, and perhaps force the institutions to take cognizance of specific cases. Most importantly, it will enable a dialogue on more effective modes of seeking justice. (Of course those who wish to remain anonymous should be respected and alternative ways of sharing their experience should be explored.)

Should the various commissions -- the national and state human rights, women, children, and scheduled castes and tribes commissions -- not be compelled to intervene? Or have we given up on them too? We urgently need to bring out sector-wise evaluation reports on these committees 2013 onwards, examining whether ordinary women workers got justice.

The fight is far from over: Two decades since we won the first battle on sexual harassment, it is now time to think afresh and arrive at new approaches to challenge the power dynamics at the workplace in fighting sexual violence against women.

Kavita Srivastava, national secretary of People's Union for Civil Liberties, Rajasthan, has helmed the fight against gender injustice for more than three decades now. She was a principal campaigner for Bhanwari Devi's justice, which led to the 1997 Vishakha judgement, and continues to be a voice for human rights.