In the absence of an exclusive legal framework, they are dependent on the kindness of individuals. 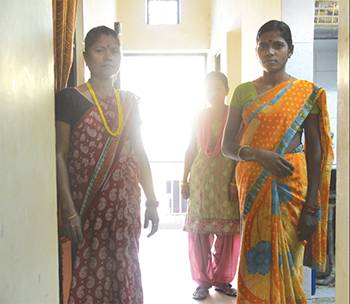 Reshma came to work for me when I shifted to Mumbai in November 1999. She was like clockwork -- if the bell rang at 7 a.m., you knew it was Reshma. She was quiet, smiling and diligent. Reed thin with a rounded stomach, I often wondered whether she was malnourished -- I plied her with food, which she would always take away with a nod and a smile. I never knew if she ended up having it. My queries were answered with monosyllables and smiles.

One January day in 2000, a happy young man, her husband, came around to tell me Reshma has had a baby -- a boy. Two weeks later, Reshma was back at work, reed thin but without the belly this time -- quiet, smiling and diligent.

She must have been at least seven months pregnant when she started working with us, but she did not tell me fearing I may not have hired a pregnant woman. She told me, much later, she had lost two jobs already because she announced to the employer that she was pregnant. And in one of those houses she has been employed for over four years. That is India's domestic worker for you  --  invisible and unrecognized, overworked, underpaid and abused.

Horror stories abound -- from physical and sexual violence, to mental torture, from being given rotten food to eat to jail-like incarceration. Even when there is no visible abuse there are violations amounting to torture. There are employers who treat domestic workers with courtesy, respect and guarantee the rights they are entitled to, but all of these depend on the individual -- there are no laws to protect the interest of these job seekers because, you see, domestic workers are not workers at all. Well, on paper, domestic workers have been covered under various Acts, but without any clear definition of domestic work or laws recognizing domestic help as workers, they are left with very little agency.

Domestic workers are not recognized under labour laws and can be made to work up to 15 hours a day, seven days a week, often without a break or leave. What is crucial for the livelihood of large numbers of women from the most vulnerable and marginalized backgrounds, is an informal economy that falls into the shadowy and murky zone of the unorganized sector.

In spite of significant research and work on domestic workers' rights, conducted by the International Labour Organization (ILO) and other reliable groups, there is still no consensus on the number of domestic workers in the country. Data availability is poor and often do not tally. The National Sample Survey 2004-2005 found 4.2 million people were employed by private households in India. On the basis of this survey, it was clear that about 2.2 per cent of all employed women were domestic workers. Unofficial estimates range widely -- from 2.5 million to 90 million -- and any attempt to reach a more exact number is difficult as government data often do not match research data.

This is one sector where human rights abuse is rampant -- there is no minimum wage, every benefit is at the employer's whim and fancy. Live-in domestic workers are completely dependent on their employers for their basic needs such as sustenance, proper living conditions, medical assistance and freedom to step outside their employer's home. Because they are poor and often uneducated, they have very little bargaining power. Desperately needy, they often fall prey to the promises of sleek traffickers posing as representatives of placement agencies and sell their daughters off to the promise of a monthly pay packet and what they think is a secure future.

These domestic staffing and household employee agencies also have no adequate laws governing them in India. Some states have issued guidelines for the regulation of these agencies under the Shops and Establishments Act, but these are recommendations that are to be considered as per local needs -- which leaves a lot of room for interpretation.

The Domestic Workers Convention passed by the ILO in 2011 has found very little interest in India. In 2012, domestic workers were added to a free health-insurance scheme. A handful of Indian states -- Andhra Pradesh, Bihar, Jharkhand, Karnataka, Kerala, Odisha and Rajasthan -- have recently made attempts at including domestic workers in the legal provisions of minimum wage. A major amendment to the Child Labour Act has been the prohibition of employment of children below 14 years of age in all occupations. They are covered under the Unorganized Workers' Social Security Act, 2008. The Sexual Harassment of Women at Workplace (Prevention, Prohibition and Redressal) Act, passed in 2013, also includes domestic workers within its purview. However, without a clearly defined and exclusive law safeguarding their interests, implementation becomes an uphill task.

Till date, there is very little data where women have made official complaints against their employers. Fear of losing their jobs and the practical difficulty of applying the law within a household are a few of the reasons why women don't complain and why it is difficult to get the law into homes.

Much work has been done by the National Domestic Workers' Movement and smaller organizations across the country. But the workplace is often inaccessible and most domestic workers are employed across different locations -- attrition, migration and others issues have stopped short of organizing domestic workers into a unified front, which is pivotal in ensuring progressive policy and legislation, while simultaneously enabling better enforcement of existing legislations.

We can cry hoarse, wishing people would change their mindset and attitude towards domestic workers, but as long as it is unrecognized by law and policy, a few changes here and there will remain individual acts of fairness and compassion -- not that they are not welcome, but they are not sufficient.

As raised in the latest welfare and regulation of employment bill: Defining domestic work and recognizing domestic workers as workers, which would enable the application of certain Acts to them.

Sohini Bhattacharya is the CEO and president of Breakthrough, a human rights organization dedicated to removing gender-based violence from society. She has been working in the development sector for over 25 years.