The Crisis in TV News

The medium, faced with a rapid erosion of credibility, must stand up straight to save itself. 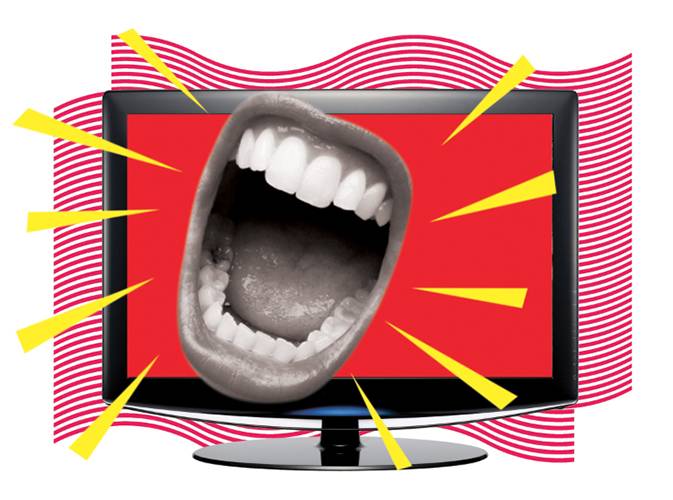 We are now in an age of the "Ravana school of journalism": Ten heads peeping out of a television set, each shouting and arguing with the other even as the anchor shouts the loudest. News is no longer about public interest but ratings, not facts but opinion, where studio debates matter more than stories from the ground, where a reporter is often only a bite-gatherer. Many national channels today are doing away with bureaus and investing less in storytelling from the ground. It is easier and cheaper to get four to five people in a studio to argue with each other.

There is a crisis in television news journalism. We have been part of a television news revolution that broke the monopoly of Doordarshan, brought a passionate and infectious energy to the news process. But two decades later, the revolution we were all part of now threatens to devour us.

For 41 days, farmers from Tamil Nadu agitated in Delhi's Jantar Mantar for their loans to be waived off. They even brought the skulls, or replicas, of their fellow farmers who committed suicide, in the hope that someone will take notice. The skulls made for dramatic pictures, which is why the story was finally covered by the national TV media for at least one day. Otherwise, like the anonymous kisans committing suicide across the country, the plight of these farmers would have been easily forgotten.

TV today is primarily about drama. Contrast our coverage of the Tamil Nadu farmers with the protests over Jallikattu. Every national channel suddenly discovered the ancient bull sport -- because the people of Tamil Nadu succeeded in making a spectacle out of it. As thousands, including filmstars, gathered at Marina Beach, the visual appeal attracted television cameras, as did the TRPs, which now showed the Jallikattu protests in Chennai had the maximum ratings.

Chennai, till last year, was complaining that most news channels ignored the south of the Vindhyas. In December 2015, there was massive flooding in Chennai, half the city was under water, and yet the report barely made it to the national headlines. If there is minor flooding in Delhi or Gurugram, it becomes instant breaking news. It took the water to reach the wall of Jayalalithaa's house for us to wake up to the crisis affecting the citizens of one of the country's largest cities.

North-east India witnesses flooding almost every year. Their story is rarely, if ever, covered in the national TV media. Dibrugarh [Assam], in September 2015, had experienced its worst flood in more than a decade. And yet, it didn't make it to the headlines of any national TV channel. Are we then surprised that the north-east feels alienated from the Indian mainstream? I call it the "tyranny of distance": It means the further you are from the national capital, the less likely your story will be told.

A bigger challenge lies in a new beast that has entered the media jungle: social media. When it first emerged, I saw it as a great way to bridge the gap between the journalist and the viewer, to democratize opinion and create a large pool of citizen journalists able to tell their stories from every corner of the country. However, social media has only poisoned the news ecosystem further. Twitter, for example, is often used to spread lies, disinformation, hate and propaganda: armies of political operatives using the medium to target each other and confuse and corrupt the news environment through endless trolling. Worse, some of our netas celebrate these trolls. Mainstream TV news is now affected by what is trending on Twitter. News editors are encouraged to look at viral videos on Facebook while deciding their news rundowns. We are consciously adding provocative hashtags to a story so that it becomes the talking point of the day. An outrage factory has been created on social media and television news is expected to echo it. Instead of television leading the narrative, it is social media that is influencing the change.

The truth is that a farmer suicide will not trend on Twitter but religious extremism will. Moderate voices will not go viral on a Facebook video but shrill, loud voices will. When a [Subramanian] Swamy questions the patriotism of a former RBI (Reserve Bank of India) governor, it trends online. That evening, Swamy is on national television as the newsmaker of the day. An [Asaduddin] Owaisi makes a mummy versus yummy remark on cow slaughter, his video goes viral and is then discussed nationally on prime-time television. Swamy and Owaisi are the new prime-time warriors: one who speaks the language of Hindu majoritarianism, the other the language of Islamic victimhood. But do they really represent the silent majority? Or are they simply playing a role created for them?

I wonder whether we have reduced public opinion on TV to black and white polarities -- Hindu versus Muslim, right versus left, liberals versus extremists, nationalists versus anti-nationals, them versus us -- caricaturing the medium into stereotypes, with news anchors reduced to performers. Nowhere is the danger of this more apparent than in the narrative on Kashmir. In the contemporary TV format, Kashmir is now about stone-pelters versus Army, separatists versus "true" Indians. If you tell the story of the stone-pelter, then you must be anti-national. What if I tell both stories? Isn't that what good journalism is about, or have we in the New Republic of India reduced news to dangerous patriot games, where if I cover a Kanhaiya Kumar speech, I am anti-national, but if I give voice to those who kill in the name of the cow, then I am nationalistic? Social media has no accountability, but television news, with the instant and powerful impact of visuals, cannot afford to be similarly reckless.

In the end, we, journalists, must blame ourselves. The editor is expected to set the moral compass for a news network, mentor young journalists, separate the right from the wrong, be a gatekeeper of the news, tell truth to power, hold those in public life accountable.

Sadly, many editors are now news managers, not valued for their editorial skills but for their networking ability. It is proximity to power that matters more than journalistic independence. Editors caught on camera seeking bribes and sent to jail as a result now give sermons to the nation from TV studios on morality. Others call themselves independent, but do not think twice before taking money from political figures to set up their channels.

Ownership patterns and business models are under siege. Owners of news media often do not want independent-minded editors. But why blame them for their private political or corporate agendas? What about us as editors? The fact is, we are tempted to play god. We are economical with the truth, but full of ourselves. It is our arrogance that has let us down when humility is what we should be striving for.

Over the years, the news media in this country has been a watchdog: We have exposed corruption, held a mirror to society, been at the vanguard of protecting democratic freedom. But the watchdog is now becoming a lapdog. During the Emergency, L. K. Advani had famously said: "When journalists were asked to bend, they crawled." Today, we must learn to stand up straight, not only when the national anthem is played but when we are faced with the rapid erosion of our credibility.

Rajdeep Sardesai  is a veteran journalist, TV personality and author of 2014: The Election That Changed India. He is currently consulting editor and lead news anchor of India Today.

Excerpted and edited from a speech given at the 2017 Venkatesh Chapalgaonkar Memorial Lecture in Pune.