From The Archives: R. K. Laxman, The Uncommon Man

The late Rasipuram Krishnaswamy Laxman was one of India’s foremost cartoonists and creator of the immensely popular character, the Common Man. Here he talks to Reader’s Digest about some of his pet peeves and his life as a cartoonist 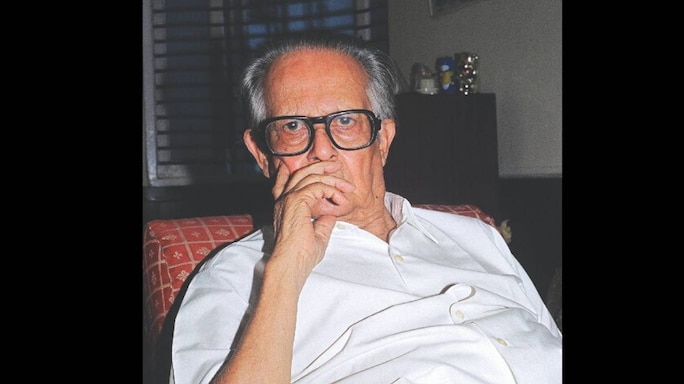 He's been one of India’s most popular cartoonists for more than five decades, but Rasipuram Krishnaswamy Laxman is not the merry, benign funnyman many of his fans fondly imagine him to be. He has a mordant view of the world, especially of politicians, and he doesn’t suffer fools of any stripe gladly. Woe betide you if you say something silly in his presence. Work has been the passion of his life, and even the stroke he suffered last year has not slowed him down much. He has to be helped to get up and to move around, but while drawing he remains as fiercely alone as ever. We met the octogenarian Magsaysay-award winner at his Mumbai home on a recent Saturday evening [in 2004], but only after he’d finished his cartoons for the next day’s paper. After we’d been served fine South-Indian coffee, his testy look made it clear that there was to be no fooling around.

Reader's Digest (RD): Your cartoons are coming out just like before. How do you manage given your current state of health?

R. K. Laxman (RKL): I have been drawing since my childhood. But I don’t know how long my cartoons will continue ... My left side is affected. It’s difficult to use my left hand which is very important for everything, even holding a newspaper. The paper keeps moving. I prevent that by putting off the fan and placing a weight on it. I have to read many newspapers—all are full of speeches. So boring!

RD: Then why do you read them?

RKL: To get some ideas.

RD: Do you take breaks?

RKL: I don’t think about time. I carry on till I finish my work.

RD: You don’t wear a watch?

RKL: Why should I wear a machine? If I want the time, I can ask.

RD: You’ve said in your autobiography that machines fascinate you. You repair clocks?

RKL: I used to, as a hobby. Now I can’t. Anything that goes out of order around the house, I used to repair—all the taps, the electrical connections ...

RD: You’ve been in the profession for well over 50 years ...

RKL: 54 years in The Times of India alone.

RD: What has changed in all those years?

RKL: Politics has gone from bad to worse! Yet politicians have been providing me with my bread and butter. Morarji Desai, Deve Gowda ... these kinds of characters have helped me. The Laxmans at home. Seated: Laxman and his wife Kamala. Standing: Laxman’s son Srinivas, his wife Usha, and their daughter Rimanika (Photo courtesy the Laxman family)

RD: Did you ever consider moving to Delhi to be near the scene of action?

RKL: I went to Delhi frequently, attended the Lok Sabha, the Rajya Sabha, but it’s better to live far away from all that—you get a better view.

RD: You’ve met many politicians in your time. Did you meet Nehru?

RD: What did you think of Nehru?

RKL: He was the best ... gentle, cultivated and caring. He called me for 10 minutes, but our meeting went on for an hour.

RD: If our leaders have changed, have our people changed too?

RKL: They remain as helpless as they ever were. They don’t react very much.

RD: Is that why your character, the Common Man, has also not changed?

RD: Will you give him something to say?

RKL: No, I won’t. The power is in keeping one’s mouth shut, not in blah-blahing.

RD: You remember the Emergency?

RD: You met Indira Gandhi then.

RKL: I went and saw her, told her my profession depends upon satire and she said, “In a democracy cartoons are essential, you go on, don’t worry.” But V. C. Shukla [then union information and broadcasting minister], took umbrage at one of my cartoons and warned me. I said Mrs Gandhi has asked me to carry on. “Don’t mention her name,” he said, “many people mention her name and think they’ll get away with it.”

RD: You remember that cartoon?

RKL: It had the Common Man in a perambulator, being pushed by D. K. Barooah [then Congress president]. 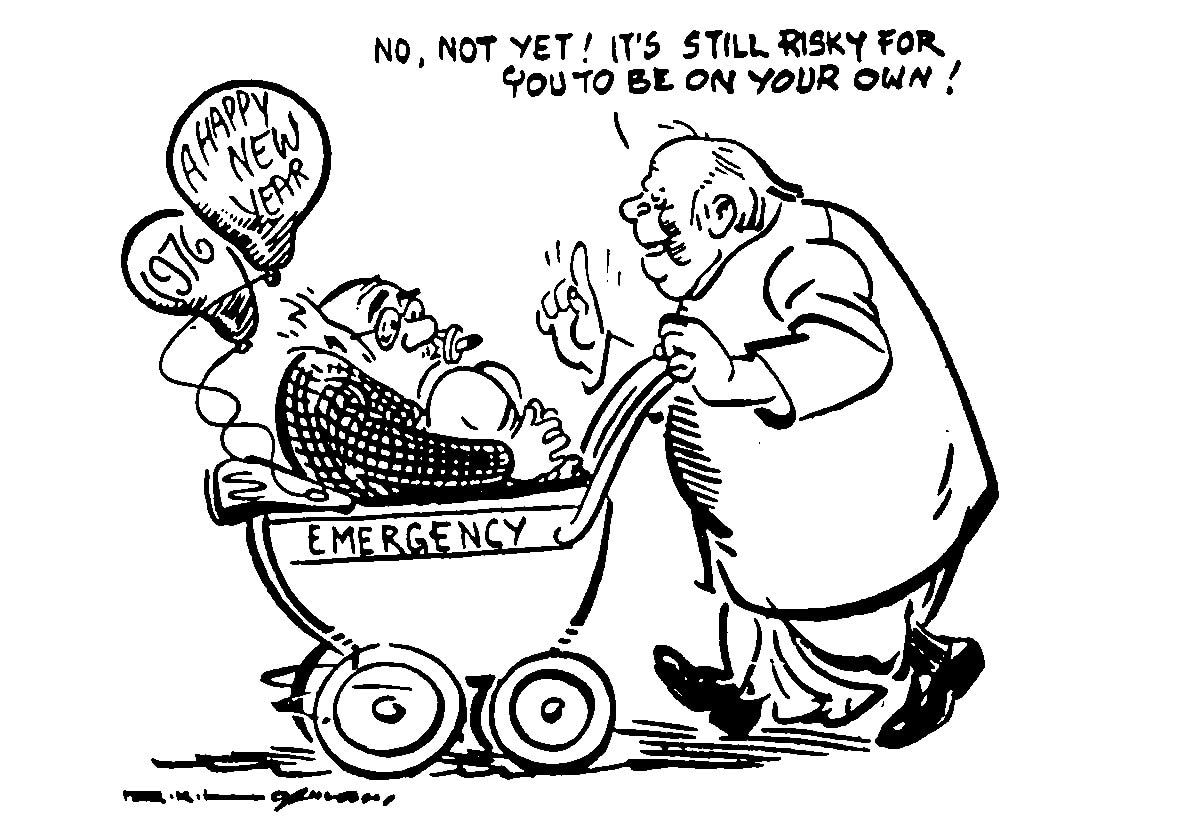 RD: After V. C. Shukla’s warning, you went to Mauritius for a vacation.

RKL: I had a wonderful time in Mauritius. Then I saw a newspaper in a hotel which said “Mrs Gandhi is to have elections soon.” So I came back. And you know, she lost and I won!

RD: The Emergency is a part of our history. You think it can happen again?

RKL: I don’t think so. With so many terrorists around, nobody will risk it.

RD: Did being the youngest in a family of eight children help you become what you are?

RKL: A great advantage I had was that my family never interfered with me. As a kid when I drew on the wall, they appreciated it. When I failed in school because I was weak in mathematics, they never questioned me.

RD: Even though your father was a strict headmaster?

RKL: He never questioned me. So, I developed my art on my own. Just see how the mothers and fathers of today harass their children!

RD: You were close to your mother?

RKL: Very close. My mother was an orthodox South Indian lady. She had had no formal education, but was well-versed in the Tamil classics, the Ramayana, the Mahabharata, even Shakespeare. She was a good tennis player and a great chess player. The maharani of Mysore was her close friend. Whenever she played chess with the maharani, Mother used to get defeated deliberately, so that there’d be no ego problems.

RD: And your brother, R. K. Narayan—did he influence your career?

RKL: I started to illustrate his short stories, essays and novels even when I was very young.

RD: Was there any other brother who influenced you?

RKL: They were all appreciative. Once I was copying a cartoon from Punch. One of my brothers who was passing by said, “Never copy. Draw from real life!” From that day, I never copied.

RD: Did any of your teachers encourage you to draw?

RKL: One day in primary school the teacher told our class, “Draw a leaf” and left. Later, as each boy showed him his work, the teacher was furious. When my turn came, he looked at the peepal leaf on my slate and asked, “Did you draw this?” I got scared and said “No sir ...” and started walking backwards, thinking I’d get a slap. But he said “Very good, you’ll become a good artist,” and gave me 10 marks out of 10.

RD: Were you keen on your studies?

RKL: No. Who needs a degree for my type of work? My degree certificate is still in the Mysore University registrar’s office—I haven’t yet picked it up! But I have [honorary] doctorates, doctor of Marathwada University, Mysore University ... [laughs].

RD: After high school, you applied to Mumbai’s J. J. School of Art?

RKL: And I was rejected. Those idiots said I showed no signs of talent. They did me a favour—that’s the irony.

RD: If you’d got into J. J., what would you have been today?

RKL: I would have been in some advertising company, an artist doing babies’ food and ladies’ lipsticks.

RKL: I gave away the awards. Then they said, “Speech, speech!” and so I spoke. I described how I was rejected years back. I repeated their words: “You show no talent whatsoever.” 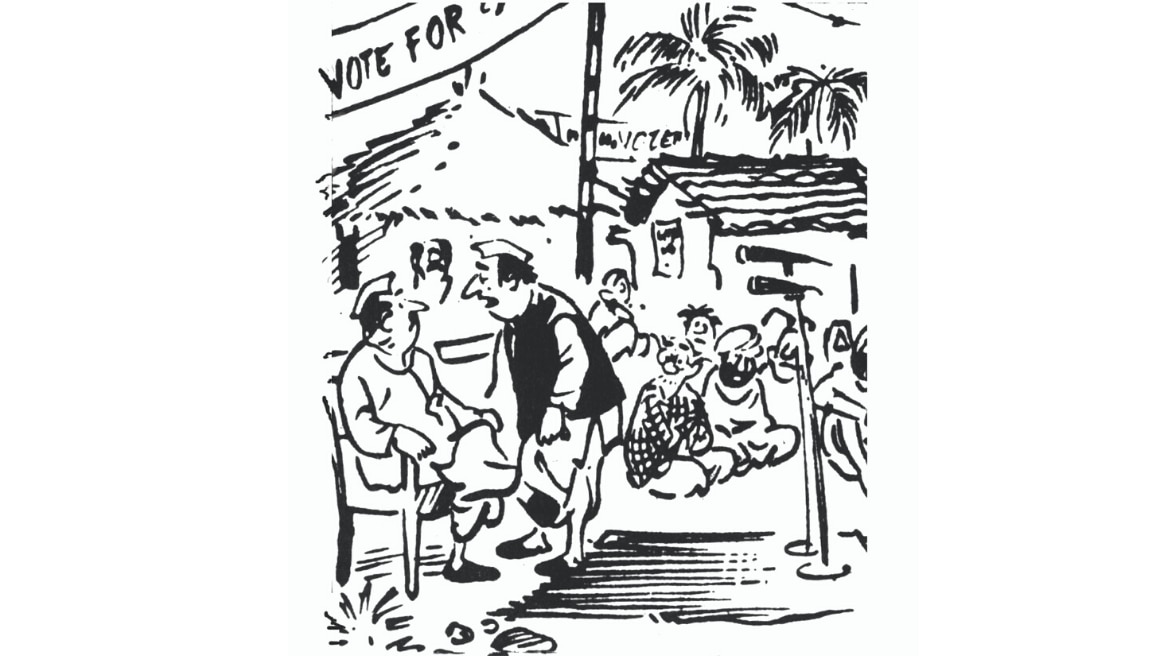 “I wouldn’t advise you to promise drinking water. Promise something simple.”

RD: There’s a theory that many creative people do poorly in studies.

RKL: Too much school and college! The year my brother R. K. Narayan wrote his famous book Swami and Friends, he failed in his B. A. English!

RD: Do you always get ideas for your cartoons?

RKL: Each day is worrisome. My God, what-am-I-going-to-do, that sort of thing. The moment you finish your drawing for the day, the next day is already upon you. But somehow all these years, something, some politician or other, has provided me ideas—touch wood.

RD: Haven’t you told yourself ‘Look, I know the idea is going to come anyway, so I mustn’t worry about it’?

RKL: That overconfidence is never there.

RD: Have you ever been told by your editor what to draw?

RD: You started writing books, too, after many years of drawing cartoons. What was your first book?

RD: That was based on the hotel you lived in when you first came to Bombay?

RKL: Yes. How do you know that?

RD: It’s in your autobiography.

RD: Why do you paint crows?

RKL: I like that bird very much. Stands out against any background. Black and white, subtle green and black, blue and black, and it’s the most intelligent bird.

RKL: For its colour and shape. The ugly bird is the peacock—overrated, too garish. Laxman with one of his crow paintings (Photo courtesy Mohan Sivanand)

RD: How would you describe your own cartoons?

RKL: It-could-be-better ... sort of thing. I wish I had drawn that like this.

RD: So if you had a chance to correct it, you would?

RD: Did you ever have any disappointments in your career?

RD: What do you attribute that to?

RD: With many new cars available, why do you drive an Ambassador?

RKL: It’s one of the best cars. Spacious, very strong. The black Ambassador is my favourite.

RD: Even in your cartoons, when you draw a car or a plane, you draw old models. You don’t draw Hondas and Marutis, you draw Ambassadors.

RKL: Not purposely. Perhaps I am not observing modern-day cars. Planes have not changed much.

RD: What is it like being a famous person? 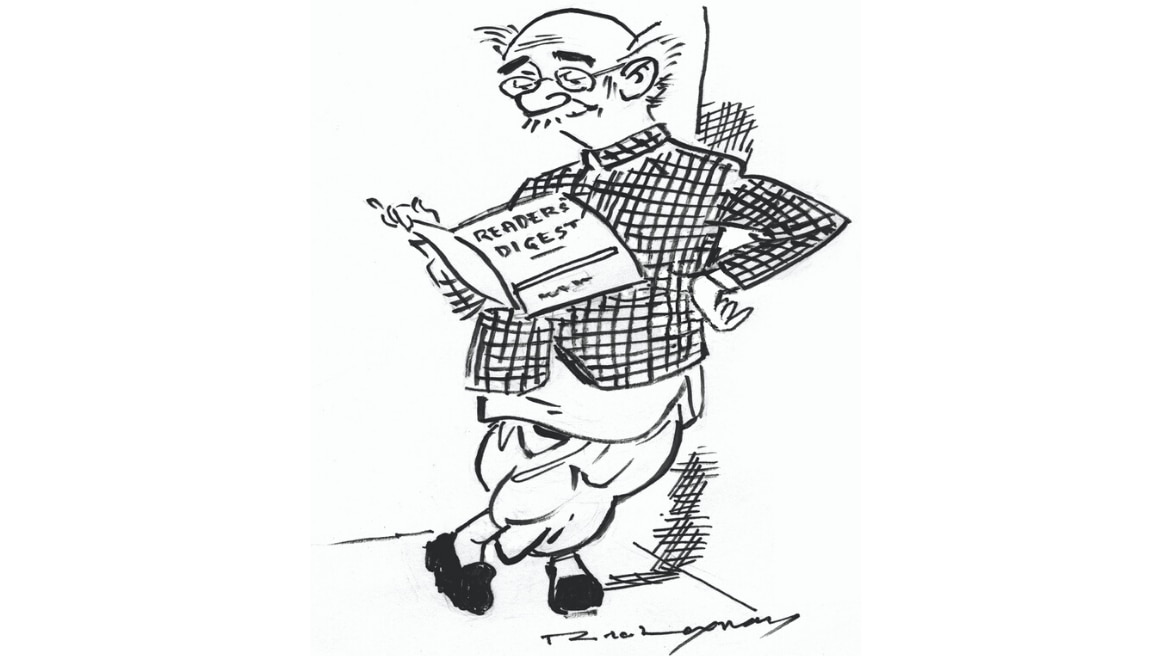 A Common Man sketch made especially for Digest readers

RD: But you must get invitations from everyone to go here and there.

RKL: Yes. I used to address Rotary clubs, Freemasons, this, that. But I’ve stopped now.

RD: Did you belong to any of these societies?

RKL: No, not even human society. I’m a loner.

Do You Like This Story?
28
1
Other Stories
Please enter valid text
corona updates
Must Reads
Latest Issue