Living In A Post Corona World: Don't Kill People With Your Habits

Social is easy—distancing is hard 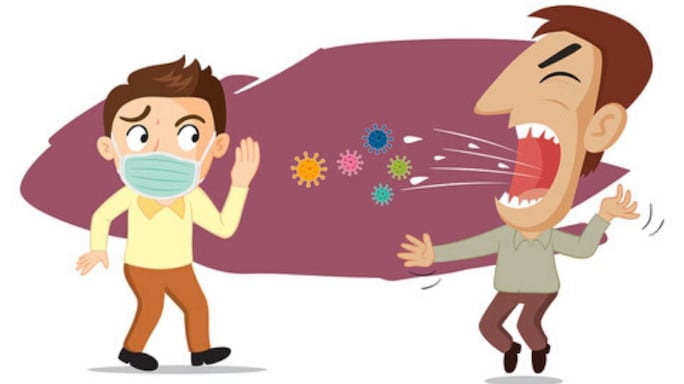 The white man’s face went pink and his eyes bulged. He made a strange noiseless movement⁠—a tiny convulsion. Like he’d swallowed a caterpillar. Then he went back to white.

“Excuse me,” he said to nobody in particular.

“Bless you,” replied his companion.

I was standing inside the store, a social distance from them. Wow, was that a sneeze!

A Dolby-Surround “achoo” shook the store. A middle-aged gentleman in a yellow shirt standing at the end of the aisle had erupted, spraying the pasta shelf in the process. Four packets of pasta thudded to the ground. 6.8 on the Richter, I thought to myself.

Shoppers fled his corner. We were in an “orange zone” store, but Mr Yellow Shirt deserved a containment zone all to himself. “Never mind the pasta,” murmured the sneeze-swallowing white man.

I stepped out of the store to find a dog standing in one of the circles drawn outside. People huddled together at anti-social distances outside the ATM next-door.

A car with two passengers went by. I thought, at least someone is sensible. Then another car sped by⁠—this one like an overstuffed human can with body parts sticking out from the windows and open hatch. It reminded me of when I used to travel by local train in Mumbai. You didn’t need to iron your clothes, the train did it for you.

Closer home, I greeted my neighbour. He mumbled something through his mask and the paan he was chewing. As we exchanged niceties, he spat out his paan, forgetting he had a mask on. Blood-red liquid ran down his chin. His mask resembled a leaky bandage. I thought of offering my handkerchief, but his ketchupy face was a strong argument against such action. Instead, I opened my shopping bag and proffered a bit of the toilet paper I’d just bought. He took off his mask, finally spat out the paan and wiped himself clean, cursing. I suppressed a chuckle. Not one to be defeated for long, he ingested a packet of chewing tobacco with my name written on it.

“Aapke nam pe (In your name)," he said, smiling. The brand was called Chetan.

He threw the packet and mask on the road, missing the dustbin by a mile. I picked both up, threw them into the dustbin (Note to self: wash hands upon return), and continued the conversation. Embarrassed, he made some sheepish noises, offering to pick things already in the bin.

After three months of the virus, I am thinking about the various habits we Indians have that make us more vulnerable. Yes, we’ve had a low fatality rate, and I am grateful for that. But the virus hasn’t gone away, and we have to learn to live with this threat. Manage it.

While we are notorious for many of our bad habits, some come from being magnanimous and close knit. We’ve always had a lower “personal space” threshold. In school we all shared food and formed tightly-packed lines during assembly. We’re used to being compacted in public transport. “Puthe Sarka” in Mumbai BEST buses is “Swalpa Adjust Maadi” in Bengaluru. Culturally our instinct is to welcome guests and share what we have⁠—whether it is space in our buses or in our homes. “Jagah to dil mein hoti hai (Largeness is in the heart)" goes the popular refrain. When I travel abroad, I often meet people in hotels who are visiting their children or a sibling. And they’re staying at the nearby hotel. Imagine that happening in India?

But now our social magnanimity makes us vulnerable, or worse, dangerous. We need to reconsider many of the things we do reflexively and change habits that can be risky. In our little Himalayan village with limited public transport, pedestrians are always looking to hitch a ride, and I oblige. But I’ve stopped giving rides to people since the pandemic started. It’s not just for my safety, but also theirs. It is also for the safety of our elderly Amma next door, whom we meet often. I don’t want to kill anyone by being social and magnanimous. You shouldn’t kill people with your habits either.

Do You Like This Story?
49
2
Other Stories
Please enter valid text
Must Reads
Latest Issue