No rational, scientific, knowledgable person would bother with lucky colours or ‘slate magic’ ... would they? 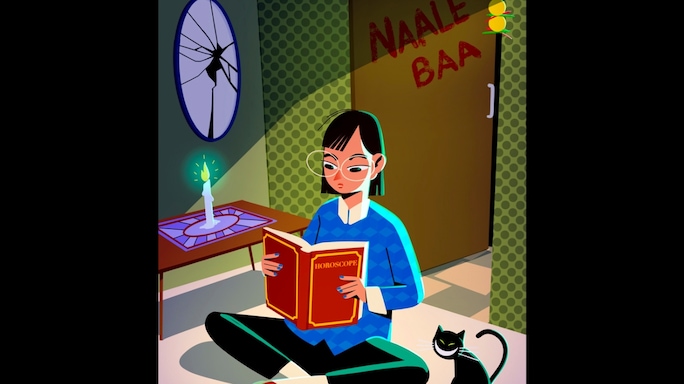 Growing up in Bangalore during the mid-60’s, my childhood idyll was marred by a terrifying event. A bloodthirsty she-ghost was rumoured to be visiting the city, and a wave of fear had gripped our neighbourhood in Shantinagar.

But all was not lost: There was a simple solution to discourage this supernatural visitor from entering our homes and massacring us in our sleep. All we had to do was clearly paint the words naale baa (meaning ‘come tomorrow’) on our front door.

Despite the dubious premise regarding our local spectre’s literacy and obedience, the strategy seemed sound: our well-read phantasm would peruse our message, and finding it fairly reasonable, move on. But fearing the ghost was schooled in only the Kannada script, we wrote our humble request in two languages, just to feel safer. Our exasperated parents rapped us on the knuckles for ruining the front door, but we kids knew better than to take chances with something so evil. And so we survived.

Superstitions, I thought, were unique to my part of the world—that is until I started school. A Punjabi girl in my class taught me ‘slate magic’—a mystical way to turn a wet slate instantly dry. “With your eyes closed, touch the slate, touch your heart, again and again while chanting ‘ja-sukh, ja-sukh, ja-sukh’,” she said. A quick demo and I was left amazed—it really worked! A few weeks later, my elder sister Bhanu explained the mystery—I had been saying sukh-ja (dry up) while wiping the moisture off the slate with my own fingers. The spell was broken.

Yet my myth-buster sister had her own irrational beliefs too, thanks to her best friend Gopa. As little girls, we were obsessed with the popular ‘pony-tail-doll’ and secretly craved to be just as fair-complexioned and blonde. So when Gopa explained that “If we pray to Jesus (God of Americans), we too will get golden hair”, Bhanu believed her. Among her childhood disappointments, this must’ve been the biggest.

Our own pantheon of gods would be invoked too, especially during the most religious month of the year: exam season. We used all our will power to negotiate for the smallest bit of heavenly intervention—when a poor grade in Hindi seemed imminent, maybe a Hindi prayer would work better? Who was the goddess of arithmetic again?

Where prayers failed, there was always Plan B: Look up our horoscopes in ‘This Week For You’ by Tiny in the Deccan Herald and wear the recommended lucky colour under our uniforms on the day of the dreaded Algebra exam.

Our faith in the preternatural spanned generations, with many of our beliefs handed down by parents and grandparents and we never questioned either. Touching a scrap of paper with our feet offends Saraswati, the goddess of learning. Clipping our nails or sweeping the floor at night would brush away our wealth. But if your right eye began to twitch, your lost fortunes were coming right back.

No matter how scientific our temperament, no one messed with superstitions in matters of matrimony. I remember setting off for weddings in our childhood with our standard and rather generous gift of Rs 50 in a white envelope. Only the amount would be woefully inauspicious unless we added one extra rupee. And so began our hunt around the house for that elusive one-rupee coin—a quest that only ended by stealthily ‘borrowing’ one from the puja-room piggybank, with a solemn vow to the incumbent deity that we’d replace it very soon.

Now in my worldly-wise sixties, I look back with much amusement at how naive and unquestioning we were in our pursuit of luck over logic, ritual over reasoning. So what if every IPL season, I’m still secretly sitting only on one particular couch, wearing yellow socks and watching the match on TV sideways, neck craned and head tilted? How else to ensure a win for my beloved home team?

Do You Like This Story?
50
4
Other Stories
Please enter valid text
Must Reads
Latest Issue