How I Finally Embraced Censorship

Dear reader, embracing and adopting every rule of censorship, however arbitrary it may be, has made me an infinitely happier person! 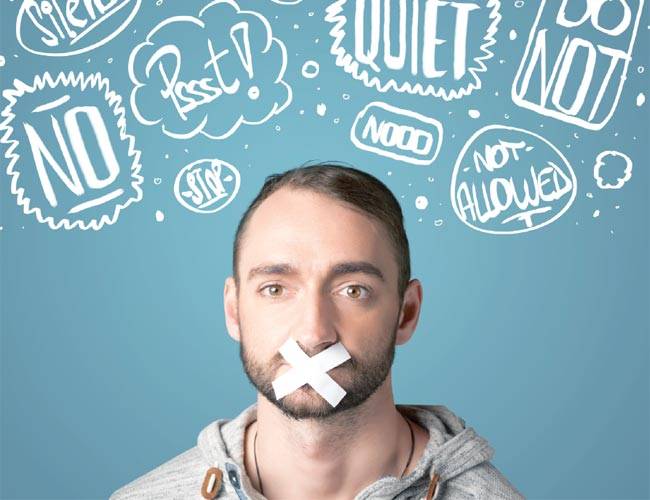 In the past, I got irritated about film censorship in my country. It made no sense. But there is no point being angry about things one cannot control. So I decided that instead of getting annoyed at censorship and all the horrible things it implied, I would embrace it and adopt its rules, however arbitrary, into every aspect of my life. I have to tell you, dear reader, that this has led to great improvements, and I am an infinitely happier person because of it.

The first great bonus was the sense of overachievement. Like the censors, who are supposed to just rate films according to age but then go ahead and cut bits out of them, I decided that I, too, would casually start doing more than I was supposed to, and it was as thrilling as I thought it would be.

At work, I got into people's computers at the end of the day and just deleted everything they had done before they could save it. It felt amazing, and when they chased me around the office afterwards we all burnt many calories, which was great. I started breaking things when I visited people's houses if they looked ugly to me. It improved their lives, though they might take some time to realize it. What do they know?

Then, there was the joy of silence, which sages down the millennia have told us is the key to cosmic harmony. If anyone said anything I disagreed with, I simply didn't listen. I leapt on passing strangers and cupped my hands over their mouths. I unfriended everyone on Facebook after going on their walls and telling them that everything they had said was wrong and they were idiots. If I had listened more in school, I would have built a mute button for humans by now and the world would have been at peace. For now, the gags will have to do, and a friend has helped me find a wholesaler, so it is all going well. How much easier and simpler it is to just ignore or silence anything we don't like! The police came after me for a while, but I was able to explain to them that this showed them in a negative light and they went away confused but pleased.

Life is short, and who wants to spend time fixing problems when we can just cut them out of our lives? Nature is the key, as always. When my cat wants to hide from me, she puts her head into something and pretends that I cannot see her body. It is charming.

Personally speaking, my love life has also improved greatly. Earlier I used to trouble my girlfriend, sorry, universally approved wife, with kisses over seven seconds, and request her to participate in several unsavoury activities. Now I just look at her and cover my face with a flower. Then we get into bed together, formally clad, and look at the fan. She seems pleased with the new arrangements, as far as I know. It is difficult to tell as I have stopped listening to anything she says.

At a social level, too, choosing to not see things I don't like-I just remove them with the power of my brain, like modifying a photo-has led to a lot of happiness. I can make anything-poverty, filth, people who are different from me, people who seem unhappy or unattractive, food, clothes and habits that are unfamiliar-disappear, and my world is happy. And full of colour and appropriately joyful songs. I have embraced censorship, and now my life is perfect. You should try it too.

Samit Basu has written several novels, including the internationally successful Turbulence. He works on a number of film, digital and print storytelling projects.