An Interview With William Dalrymple: Of History, Conquest And Anarchy

Reader’s Digest in conversation with William Dalrymple, author of historical and narrative non-fiction and co-director of the Jaipur Literature Festival 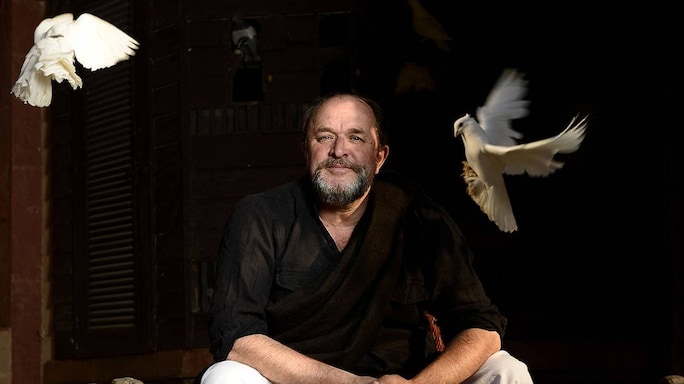 Scottish writer–historian William Dalrymple is the author of more than a dozen books, including bestselling titles such as City of Djinns, White Mughals and The Last Mughal. His most recent book, The Anarchy—The Relentless Rise of the East India Company (Bloomsbury) has been described as his “most ambitious work yet”. Reader’s Digest caught up with the acclaimed author just ahead of the Jaipur Literature Festival this month.

You begin Anarchy by showing how the English word ‘loot’ came from the Hindustani word for ‘plunder’. But some people in India and Britain believe that the English gave the colonies the gift of the English language. Is that narrative a skewing of history?

Obviously there are very complicated questions. All empires involve one set of people dominating another set of people; all empires are violent; all empires tend to be extractive. The story of the East India Company shows that when the British first came to India, it didn’t come as a conquering state. They came in this very unexpected form of a trading company, which then militarizes. But the Company, from the point it begins to conquer Indian territory, has no motive other than profit. The idea that the British came here to bestow railways, the English language, cricket and tea is a later Victorian spin, that bears no historical reality at all (laughs).

The Company made good profit trading Mughal textiles, and it found that it could make even more by conquering Indian territory, taxing Indians and not having to spend any money to buy the goods it was then selling. Which is not to say that there were not, obviously, benefits [for the colonized]. Roman rule was just as extractive of Britain in the early centuries BCE, but we gained ideas of law, the Latin language and so on. At the same time, the Roman empire in Britain was incredibly brutal, involved massacres of the native people and existed for the benefit of the empire. So you can gain things, in a sense, accidentally, from being conquered by an empire, but that’s never the motive of the conqueror.

The East India Company was in many ways a disaster for Bengal, which moved from being the premier economy in the world to being asset-stripped, plundered and looted. That said, by 1947, India did have the best communications, education and health care in Asia. When the British first came to India, they controlled three per cent of the world GDP, while India controlled 37 per cent—that figure was more or less reversed by the time the British left. So, there’s no question about who gained more. Whatever India gained, we gained much more.

The French, Dutch, Portuguese had a head start in trading with the East. How did the English trump them all?

Well, the French didn’t come first, the East India Company preceded the French. The Dutch and the Portuguese preceded the East India Company. They failed for different reasons. The French company and the Portuguese company were both state-owned enterprises that had all the drawbacks of being a sarkari enterprise—slower, less nimble and less agile than the fully capitalist, profit-making libertarian entity. And that was the East India Company’s greatest asset. Whatever negative qualities it had—and it had many—it was an incredibly nimble, energetic, responsive, capitalist organization, which moved very efficiently to gobble up profits wherever they were available.

The Dutch story was slightly different. There was this brief moment of Dutch efflorescence that comes in the 17th century—there’s the golden age of Holland; the age of Rembrandt, Vermeer—from about 1600 to about 1700 the Dutch are dominant, but from the 18th century onwards they go into very rapid decline.

What role did the Indians play in the rise of the East India Company?

The East India Company, while being extractive and plundering, was also collaborative. From the very beginning it was in business with Indian businessmen; it almost never operated on its own. It gained an enormous amount from its business with Indian partners. And almost every stage, from the moment it arrives as a trading party to the moment that it begins to militarize and is used by the Jagat Seths to topple Siraj-ud-Daula, through to the 1803 war—the final war when they defeat the Marathas, when the banking dynasties of Benares are competing to fund the East India Company’s armies—at every stage, the East India Company is working in collaboration with various Indian bankers and financiers, who support the Company as the least worst option in this time of anarchy.

This is why, in a sense, the ‘anarchy’ is such an important concept, and why I’ve given the book this title. Because everything is falling apart—the Mughal empire, this incredibly strong, solid and prosperous and united force from the 1560s right up to about 1700, splinters in an incredibly violent way, and it’s every village against every village, every town against every town. From this huge dislocation, hundreds of little states emerge, where previously there had just been one mega-state. It’s out of that that the Company utilizes its strength to pick one off after another.

What prompted you to write this book?

Eighteenth-century history is my thing. It’s my fourth book on the East India Company—White Mughals was set in Hyderabad from 1795 to 1895, The Last Mughal is set in Delhi, 1856 to 1858 and Return of a King is about the Company’s invasion of Afghanistan, 1839 to 1942. This has become my patch, this is the thing that most fascinates me, that I know most about. I spent 20 years studying that. This, in a sense, is a chance to step back from these micro-histories and tell the bigger picture. And this is the first book I’ve written which does attempt to tell the big picture, to tell this much wider story, both of the Company’s conquest of India and the underlying story of the battle of the power of the state against the power of the corporation. 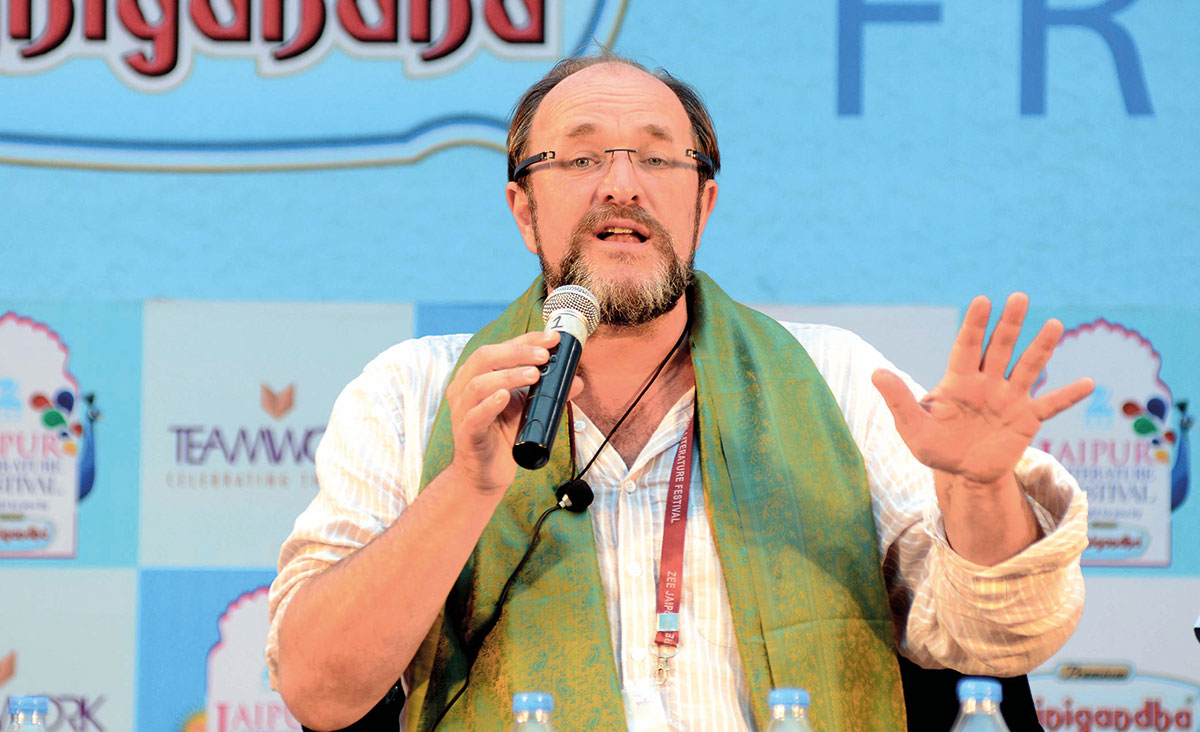 You’ve worked on it for six years! Where did you do your research?

In the National Archives in Delhi, where all the East India Company papers are. Everything that used to be at Fort William (in Kolkata) was moved there, and the British Library in London, which has 35 miles of East India Company records from the head office. The Mughal material was much more difficult to gather—for that you had to go to places like Rampur, Patna, Tonk (I got a lot from Tonk)—and finding the right Persian manuscripts from that was the most difficult thing, because it’s very easy to use Company documents—the writing is very clear, it’s very easily read and easily comprehensible. But really getting the Mughal side of the story was the hard part.

You’ve said that the East India Company was the first example of a multinational corporation. At a time when huge tech companies are becoming massively powerful, what lessons can we learn from history?

Actually, the East India Company was the fourth joint stock corporation, but the first one that went really global. We need to learn about the need to regulate these companies. Just as we need laws to control human beings, we need to develop laws and regulations that can control national corporations that span different jurisdictions and different tax regimes. Because at the moment they find it very easy to wriggle out by playing one state and one tax regime against another, like the East India Company did.

Do you think historical and narrative non-fiction is having its moment in Indian publishing?

No, not yet. I think it’s beginning. If you go to Waterstones in London or to Borders in New York, you’ll find narrative non-fiction is selling the equal of fiction. For some reason, in India, fiction has dominated. Indians are very good at it; there have always been brilliant storytellers from the time of the Mahabharata. There’s rarely a year when some Indian or Pakistani writer is not on the Booker shortlist. India has a far less strong tradition of narrative non-fiction. And it’s very odd! India, with such a strong, brilliant tradition in fiction. In a sense, if you had all the Booker Indians together, they’d be the strongest 11 in fiction, but the Indian non-fiction team would be less strong. I think it is beginning to change now. Raghu Karnad is an international star, Manu S. Pillai is coming up ... Ira Mukhoty. But it’s only the beginning, not yet in the same situation as in the US or in Britain, where narrative non-fiction is as thriving, as inventive and as exciting as fiction.

What’s next for you?

I want to do something on art history.