A Hymn For All Mankind: Where The Mind Is Without Fear

The words in Chitto Jetha Bhayshunyo [Where the Mind Is Without Fear] are so clear that there's really no need for annotation. It's no wonder that this poem from Rabindranath Tagore's Gitanjali has inspired generations of Indians and Bangladeshis 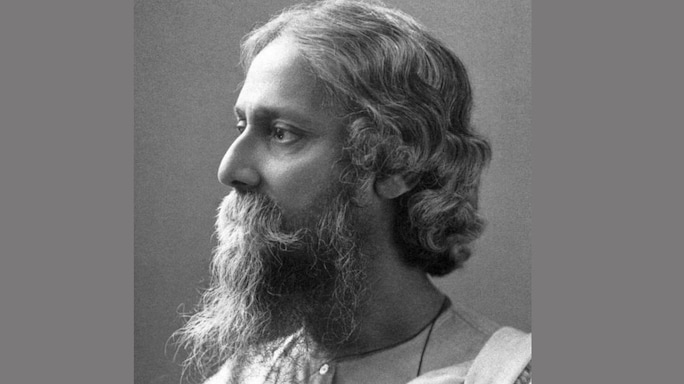 Where the mind is without fear and the head is held high;

Where knowledge is free;

Where the world has not been broken up into fragments

Where words come out from the depth of truth;

Where tireless striving stretches its arms towards perfection;

Where the clear stream of reason has not lost its way

Into the dreary desert sand of dead habit;

Where the mind is led forward by thee

Into ever-widening thought and action—

Into that heaven of freedom, my Father, let my country awake.

Poem 35, quoted here, from Rabindranath Tagore’s Gitanjali was composed and published about 120 years ago. Gitanjali [meaning “song offerings”] gets a mention in Tagore’s 1913 Nobel Prize citation. Tagore himself translated some of his Bengali works, including this one, into English while considerably simplifying them. The words are thus so clear, there’s really no need for annotation. Chitto Jetha Bhayshunyo [Where the Mind Is Without Fear] has inspired generations of Indians and Bangladeshis—who consider it a hymn to inspire all mankind.

Almost half a century before India attained Independence, Tagore here yearns for the “heaven of freedom.” The verse continues to exhort people—particularly in conflict zones across the world—to seek fearless truth, progressive thoughts and actions, and to stand up and see the world as one, undivided by borders or “narrow domestic walls.” Tagore stood for living life to the full and not for any renunciation of the world.

President Barack Obama used the opening lines of this verse in his 2010 speech to the joint session of Parliament in New Delhi. In 2013, A.R. Rahman composed Jagao Mere Desh Ko, an Independence Day tribute, featuring the poem in its original Bengali as well as a Hindi translation. Rabindranath Tagore’s birth anniversary falls on 7th May every year.

Dr Badrul Hasan, PhD, of Ujjain, MP, is a recipient of the Pablo Neruda Prize for poetry. He writes in English, Bengali and Russian.

Born in Calcutta, Tagore (1861-1941) is arguably India’s greatest poet. Bangladesh and India have adopted poems penned by him as their national anthems.