Down with Denim, A Hair-Raising Crime and a Rocky Diet

It Happens Only In India 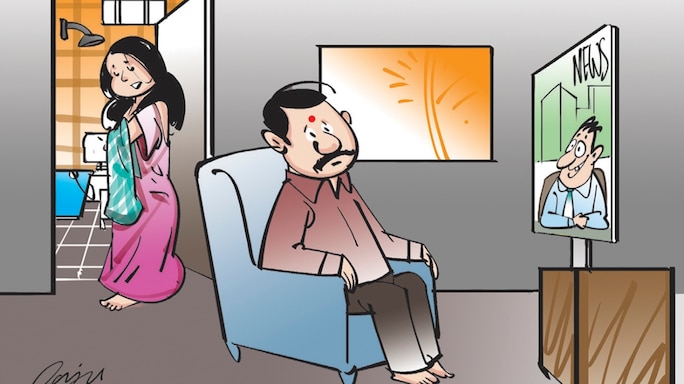 “Don’t lose my bindi. I will take it after my bath.” (Illustration by Raju E Puri)

Rumour has it—jeans have had it. Tired of bearing the weight of misogyny, the workwear classic might just hang itself on a lonely hook of your cupboard. Discrimination against denim isn’t new or novel—banned from government offices in Maharashtra and routinely ousted from Indian campuses—but Uttarakhand chief minister Tirath Singh Rawat’s attack on a fellow female passenger dressed in ripped jeans might unravel all seams. The CM believes that women who wear ripped denims aren’t capable of imparting values to their children, ostensibly since they lack any. We, women, would like the garment to take a leaf out of our handbook and ignore the gentleman, but if we could edge into this debate on women’s clothing, word-wise: We petition for real pockets on our ripped beauties.

Attached to your hair? Then you better walk the straight and narrow because a life of crime does demand all—blood, sweat, tears—even your tresses. Two gold smugglers nabbed at the Chennai International Airport partly tonsured their heads to clear up some prime real estate atop their heads to hide glued packets of gold paste. Wearing wigs, perhaps a little too unfashionable to pass muster as real hair, these two were stopped and checked because their hairdos looked suspicious. Custom officials peeled off their wigs and retrieved 698 grams of gold.

A Gut Of Stone

All Rambhau Bhodke wanted was a fix for his stomach ache. After three years of failed medical attention, he was ready to try anything, and we mean anything. Into his life came a woman and her questionable health advice—Bhodke was to start drinking black soil mixed in with water. The cure worked! And 31 years later, he is urban lore. Now known as the man who eats stones, Bhodke is addicted to chomping on these gravelly delights daily. To him, they taste like delicious cow’s milk, he says. We will take his word for it. After all there is no accounting for taste. A word of caution: Do not try this at home, with or without expert supervision.

Driving It Too Safe

Although we are no fans of the casual-flouting-of-every-traffic-rule-in-the-book attitude that is the pride and joy of both drivers and pedestrians on Indian streets, truckdriver Pramod Kumar Swain has our sympathies. Charged with a challan for not wearing a helmet while driving a truck (Yes, a truck!), Swain discovered the Rs 1,000 fine against his name when he went to renew his driving permit. Between the skyrocketing petrol prices, new toll-regimes and now a helmet requirement whilst driving a four-wheeler, life is tough on Indian roads.

With a fresh surge in COVID-19 cases, may be its okay to try every trick in the book, scientific or otherwise, to get rid of this scourge? Well, looks like the good men of science at All India Institute of Medical Science, Rishikesh are ready to give everything the good old college try. They are conducting a clinical trial to determine whether doing yoga and chanting the gayatri mantra, a religious Hindu hymn, can help coronavirus patients recover—while also receiving the usual medical treatment, and performing chanting salutations to the sun. We hope it works, just like magic.