Why we crave junk food when we’re tired 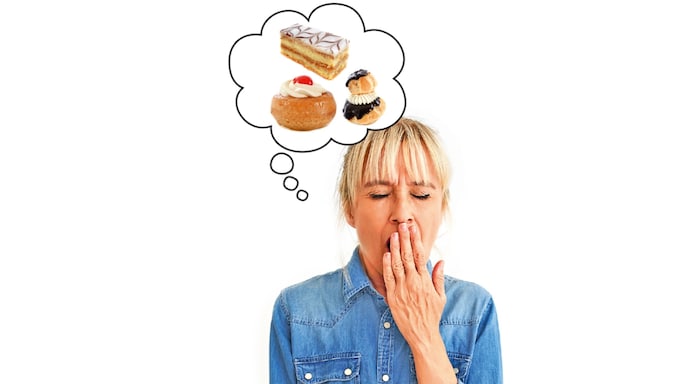 Much of what we know about sleep and diet comes from large epidemiological studies that have found that people who suffer from consistently bad sleep tend to have poorer quality diets: less protein, fewer fruits and vegetables and more added sugar. But these studies can show only correlations, not cause and effect. They cannot explain, for example, whether poor diet leads to poor sleep, or the reverse.

Marie-Pierre St-Onge, an associate professor of nutritional medicine at New York’s Columbia University Irving Medical Center and the director of its Sleep Center of Excellence, studies the relationship between diet and sleep. Her work suggests that it is better to focus on the overall quality of your diet. In one randomized clinical trial, published in the Journal of Clinical Sleep Medicine in 2016, she and her colleagues recruited 26 healthy adults and controlled what they ate for four days while monitoring how they slept.They discovered that eating more saturated fat and less fibre from foods like vegetables, fruits and whole grains led to reductions in slow-wave sleep,which is the deep, restorative kind.

St-Onge has also found in her research that the type of carbohydrates we consume matters: When people eat more sugar and simple carbs—such as white bread, pastries and pasta—they awaken more frequently in the night. It is best to consume complex carbs that contain fibre, which may help promote superior sleep.

”But the relationship between poor diet and bad sleep is a two-way street:As people lose sleep, they experience physiological changes that can nudge them to seek out junk food. In clinical trials, healthy adults who sleep only four or five hours a night end up consuming more calories and snacking more often throughout the day. They experience more hunger and their preference for sweet foods increases.

In men, sleep deprivation stimulates increased levels of ghrelin, the so-called hunger hormone, while in women, restricting sleep leads to lower levels of GLP-1, a hormone that signals satiety. “In men, short sleep promotes greater appetite and desire to eat, and in women there is less of a signal that makes you stop eating,” says St-Onge.

Changes also occur in the brain.Stonge found that when men and women were restricted to four hours of nightly sleep for five nights in a row,they had greater activation in reward centres of the brain in response to pepperoni pizza, doughnuts and candy compared to healthy foods such as carrots, yogurt, oatmeal and fruit. After five nights of normal sleep, however,this pattern of stronger brain responses to the junk food disappeared.Another study, led by researchers at King’s College London in 2018,also demonstrated how proper sleep can increase your willpower to avoid unhealthy foods. It found that habitually short sleepers who went through a programme to help them sleep longer—resulting in their getting roughly one hour of additional sleep each night—had improvements in their diet.The most striking change was that theycut about 10 grams of added sugar from their diets each day.

“An optimal way to achieve good health is through both a healthy diet and healthy sleep,” concludes Dr Susan Redline, a professor of sleep medicine at Harvard Medical School. “These two very important health behaviours can reinforce each other.”