I Can Just Be Her Mom

For years, I feared for my child’s life. Then science did something amazing for people with cystic fibrosis Two years ago, my daughter, Samantha, graduated from college. She went on to start her first full- time job and go apartment hunting with her best friend. These milestones, bittersweet for most parents, have felt monumental to me. As Sammie steps into her future, our family stands on the precipice of a life we didn’t dare contemplate before now. Because, until recently, I still believed I would outlive her.

My daughter was almost two when we learnt she had cystic fibrosis (CF), a progressive genetic disease that affects breathing, digestion and other functions while slowly destroying the lungs. She had been dropping weight for months, her once plump arms reduced to sticks, her belly distended. A sweat test detected CF, which a blood test confirmed.

“The good news is the life expectancy for someone with CF is almost 31 years,” her pediatrician said.

My husband, Stuart, and I sat in stunned silence. I was 31 at the time. CF is caused by a mutation in the gene that controls how salt passes through cells. This causes a buildup of thick, sticky mucous in the airways that impairs breathing and leads to lung infections. It has been described as trying to breathe through a narrow straw all day long.

After her diagnosis, Sammie’s daily routine was daunting. She took more than a dozen prescription drugs, including pancreatic enzymes at every meal to digest her food.

She did twice-daily respiratory therapy, breathing a nebulised cocktail of drugs to thin the mucus in her airways, while an oscillating vest on her little body shook the mucous loose. When she was small, we pounded on her chest and back with cupped hands, distracting her with children’s videos. “Treatment should be a treat, right Mommy?” she’d say, parroting what I told her.

Stuart and I worked as a team. We acclimated the way parents do when living with chronic illness, a current of anxiety always humming in the background. As her mom, I was more than a caretaker. I was the eyewitness, record- keeper, connector of dots, making sure every doctor, nurse, insurance provider, pharmacist and teacher was aligned. Stuart, Abby and Sammie at home in Pennsylvania, in the months leading up to the CF diagnosis.

Raising a child with CF was like driving through a blizzard. Gripping the wheel, it took all my strength to keep from careening off the road. I focussed only on what I could see in my headlights, relying on blind trust to get through the most difficult patches. I was terrified to look too far ahead.

For a while, Sammie’s lung function held steady, and it felt like we were in control. Only once in the first decade after her diagnosis and initial hospitalisation did she need to be admitted for a gruelling two-week course of IV antibiotics. Many kids with CF were hospitalised yearly or even more often.

I knew people died young from CF, but I refused to believe she’d be one of them. Then my worst nightmare struck one night when I got a call at 3:45 a.m. It was one of my friends in our CF parents support group.

Her voice was a monotone. “The hospital just called. Sam’s gone.”

My friend’s daughter, also named Samantha, was 22. She’d flown home for Thanksgiving and checked into the hospital for a routine course of IV antibiotics to help clear out a lung infection. Her death was a devastating gut punch.

Though our family life was structured around Sammie’s disease, I never treated her as if she had a fatal illness. I saved my rare emotional breakdowns for the privacy of my shower or a phone call with a CF mom-friend. Stuart and I put money aside for college, talked about the future.

To reduce my daughter to a diagnosis was to dismiss everything about her. Her intelligence and sharp wit. Her creativity and kindness, the strength of her will. Her ability to make me laugh so hard I cried. For her, laughing hard would lead to a fit of coughing, a defining characteristic of this disease.

In high school, Sammie and I argued regularly as she pushed back against my hypervigilance. The more she struggled for independence, the more tightly I held on. If she missed a respiratory treatment, I accused her of being cavalier with her life.

The truth was, I was terrified. The summer before her final year of high school, Sammie was hit with a triple lung infection. She was hospitalised, given intravenous antibiotics and airway clearance therapy every three to four hours, around-the-clock. Despite weeks of intensive treatment, first at the hospital and then at home, she didn’t bounce back as we had hoped.

At 18, her routine included hardcore prescription pills with terrifying warning labels and insulin shots for CF-related diabetes, a common development. It felt like my daughter had veered down a path with narrowing possibilities.

Another friend’s daughter succumbed in her 20s. At her funeral, I sat between two other CF moms. We were the lucky ones whose daughters were still alive. Silent, we stared ahead, clutching one another’s hands. I envisioned the three of us on a row- boat, in the middle of a storm-tossed ocean, sharks circling—waiting to tear us apart. At 22, Sammie joined a clinical trial for a triple-combination drug to target the underlying cause of CF: its mutated protein. For years, we’d heard about this new generation of drugs in the pipeline that focused on restoring that protein’s function. Less powerful versions had come to market for smaller CF populations with rare mutations and those were game-changers. This new drug would address the most prevalent mutation, and the Phase 2 trials looked promising.

For the first few months of the Phase 3 trial, nothing changed for my daughter. We assumed she was among those taking the placebo. Then the study entered its open-label stage when all participants received the drug. Within hours of taking her first pills, Sammie began coughing violently as her airways were purged of mucus. Within a week, her lung function skyrocketed and her chronic cough disappeared. Within months, her blood sugar levels normalised, and she could stop injecting herself with insulin, although she continues to take other medications. 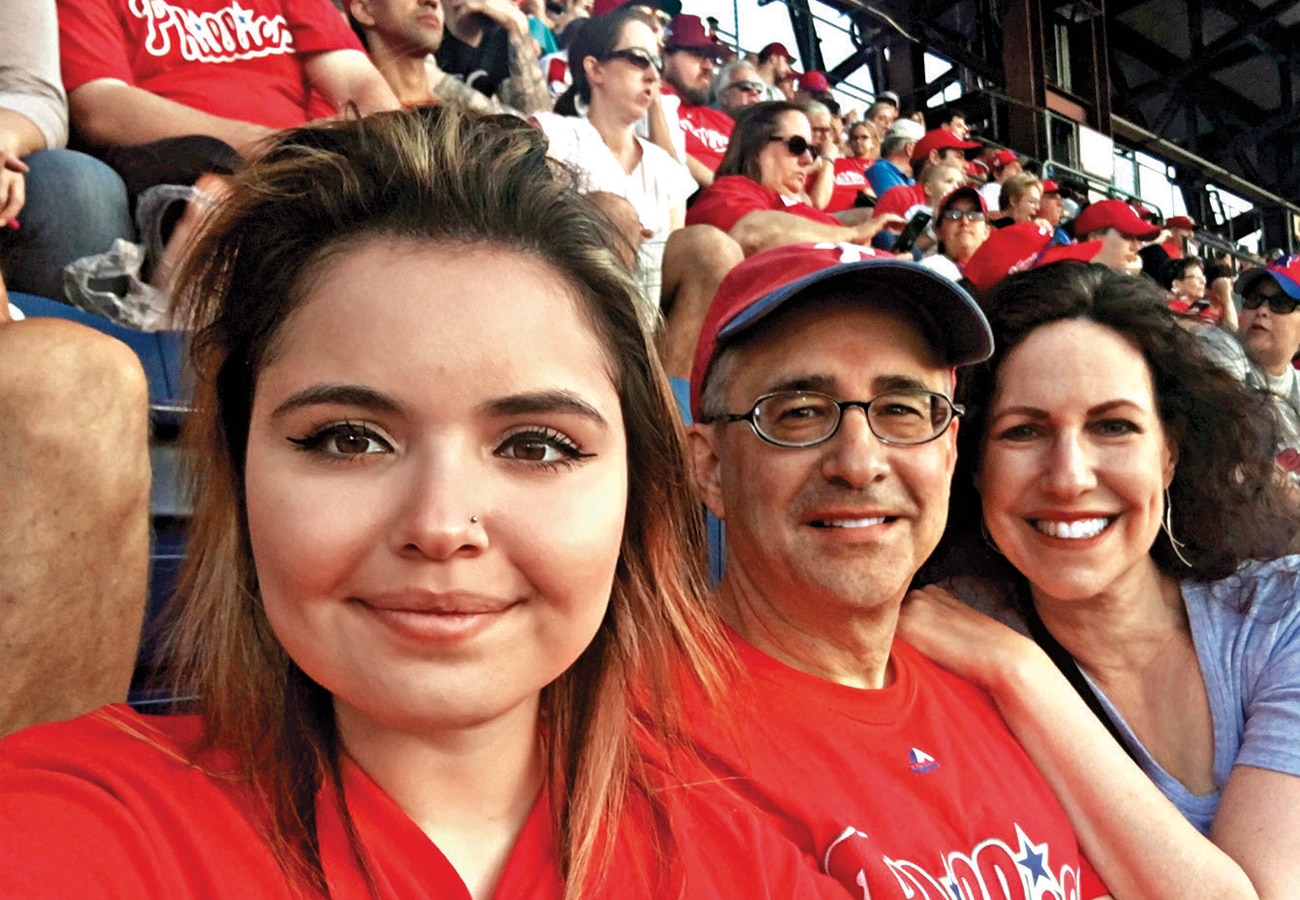 The family taking in a Philadelphia Phillies baseball game in 2019.

The drug, Trikafta, received approval by the US Food and Drug Administration in October 2019. It arrived like the hero in an action film, snipping the wire on a ticking time bomb with only seconds remaining.

I was a mess the week Trikafta was approved. It felt like I’d been holding my breath for 20 years and could finally exhale. I in- haled stories about young adults with CF suddenly moved off lung transplant lists or able to have kids. My daughter got tired of hearing me talk about it.

“I know you’re excited about the drug, and I get it, but you have to understand. I was never afraid of dying from CF,” she said.

Parenting a child with a chronic illness is, in many ways, like parenting any child. It requires trust and a willingness to live with uncertainty. Eventually, you have to let go and hope your child has absorbed the lessons you tried to impart.

My daughter has grown into a re- markable young woman. Strong, confident and capable. She no longer needs me to be her caretaker. I can just be her mom.

A DRUG WITH PROMISE

Known as Kaftrio in Europe, Trikafta has been approved for use in the United States, Canada, Australia, the United Kingdom and the European Union for patients aged 12 and older. It targets the specific genetic mutations that are present in 90 per cent of cystic fibrosis cases and can drastically reduce or even eliminate the presence of mucus in the lungs, enabling easier breathing. Research suggests that Trikafta has the potential to increase the life expectancy of someone with cystic fibrosis by roughly a decade.