Why you shouldn’t soak a splinter, and other ways immediate care has changed When it comes to treating injuries, the strategies our parents used may no longer be the right things to do. In some cases, folktales have been debunked; in others, doctors have found better treatments. “As we learn new things from science, the guidelines change—and that’s happening with first aid. We now have better evidence of what works,” says Dr Sean McGann, a spokesman for the American College of EmergencyPhysicians and a clinical assistant professor of emergency medicine at Thomas Jefferson University in Philadelphia.If your first-aid techniques aren’t on target, you could end up exacerbating an injury. In a study published in the journal Pediatric Emergency Care, 654 adults took a multiple-choice test on recommended first-aid skills and not one person answered every question correctly. In addition, only half of the adults were familiar with 60 per cent of the questions. It shouldn’t be that way. To make sure you’re up to speed on the latest in first aid, here are some dos and don’ts for various situations.

Place the burnt area under cool running water for at least 20 minutes to calm the pain and stop damage to the skin. “A lot of people don’t realize the thermal damage is continuing even after they’re no longer in contact with the source of the burn,” says Dr Matt Wilson, associate chair of emergency medicine at MedStar Washington Hospital . “Cooling that are aimmediately is the key to limiting the damage.”

A 2020 study published in the Annals of Emergency Medicine found that treating burns with cool running water for 20 minutes was associated with a decreased depth to the burn and significantly lower odds of needing a skin graft to repair the damaged skin. (If you aren’t near a source of clean water, use a cold compress, such as ice wrapped in a towel.)

After cooling the burn, pat it dry. You can take ibuprofen to reduce discomfort and apply an antibiotic ointment, which can help moisturize the area, says Dr Michael Carius, an emergency physician in Connecticut state.

Don’t apply butter, egg white, or vitamin E to a burn because they could introduce contaminants or irritate the raw skin, Dr Wilson warns.Applying ice directly to a burn can lead to more tissue damage. And if a blister forms on the burn, don’t pop it,because that bubble of skin provides a barrier that helps prevent infection.If it pops naturally, apply an antibiotic ointment and a clean bandage.

Seek medical attention if you suspect it’s a deep burn because the skin looks angry (like raw meat) or waxy;go to an emergency department.

You got a splinter walking barefoot

Grab clean tweezers or splinter forceps and gently but firmly pull the splinter out. “Make sure all of it is removed, otherwise it becomes a source of possible infection,” says Daniel Bachmann, an associate professor of emergency medicine at Ohio State University. Then, wash the area with soap and water and keep it clean.

Don’t soak the splinter in water. This makes the wood more susceptible to breaking apart under the skin and less likely to come out as a single piece, Dr Carius says.

Seek medical attention if you can’t get it out on your own; consider going to an urgent care centre. “The splinter has to come out, because it’s almost certainly going to become infected if it stays under the skin,” Dr Carius says. 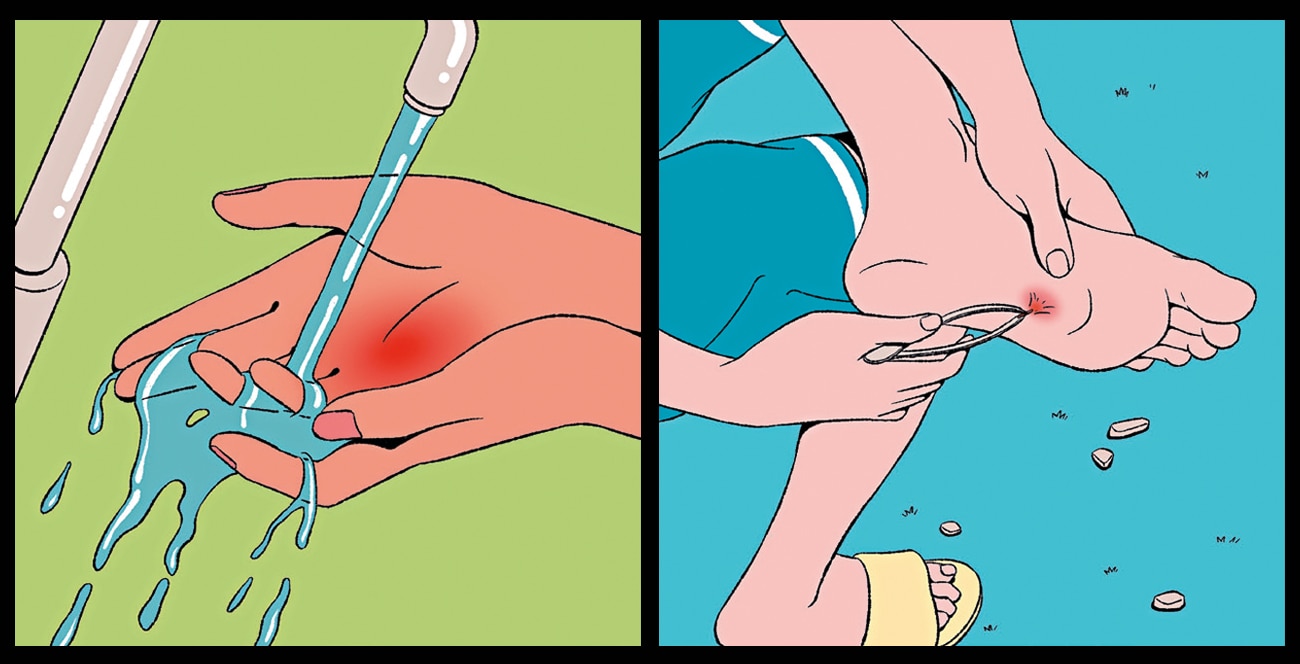 You tripped and cut yourself

Wash the cut with soap and water, making sure all dirt is removed,then apply pressure, using a clean towel, to the wound to stop the bleeding. Apply an antibiotic ointment, which keeps the wound moist and facilitates healing, and cover the cut for 48 hours to prevent infection,Dr. McGann says.

Don’t use hydrogen peroxide to clean the wound. “In addition to being painful, applying peroxide can actually damage healthy tissue and slow down the healing process,”Dr McGann says.

Seek medical attention if the wound is gaping or very dirty, if there’s a foreign body embedded in the cut,or if it’s longer or deeper than six centimetres; head to the emergency room. Keep in mind: Timing matters.“A lot of physicians won’t close a wound after 24 hours because of the risk of infection,” Dr Carius says. Your nose starts bleeding profusely. Place a towel or a wad of tissues under your nostrils, and apply pressure by pinching the nose tightly, just below the nasal bone,for 10 to 15 minutes straight. “Don’t keep checking to see if the bleeding has stopped,” Dr Wilson says. Lean your head forwards to prevent the blood from going down your throat and into your stomach, which could trigger nausea.

Don’t keep tissue in your nose to block blood flow, because “this could introduce a source for infection or make the situation worse,” Dr Bachmann says. Also, for a few hours, avoid vigorously blowing your nose, so you don’t restart the bleeding.

Seek medical attention if you can't stop the bleeding with nonstop pressure after 15 minutes. If you have a bleeding disorder or you’re taking blood thinners or other anticoagulant drugs, it may be harder to stem the bleeding; if you can’t stop it, go to emergency, advises Dr McGann.

You twisted your ankle on a hike

Elevate the ankle above your heart and apply cold or ice packs—or a bag of frozen peas—for 10 to 15 minutes at a time, every two to three hours, to reduce swelling, advises Dr Carius.Resting the injured joint and taking ibuprofen can help ease inflammation and pain. “The goal is to keep the swelling down, because that’s what causes most of the pain,” Dr Carius says. (Note: Some experts dispute the benefits of icing a sprain and say if it’s done too long or too intensely, it may slow the recovery process.)

Don’t put ice directly on the skin,because this could damage it, Dr Wilson says. And don’t apply heat in the 48 hours after the injury, as this can increase swelling—the opposite of what you want.

Seek medical attention if you can’t bear weight on the injured ankle or it looks misshapen; go to an urgent care centre. “Sometimes it’s hard for people to differentiate a sprain from something more serious like a fracture,” Dr Bachmann says.

Someone is having a seizure

Call our emergency healthcare number, then clear the area around the person so they won’t hit something. “The most important thing is to protect the person from being injured while they are having a seizure,”Bachmann says. If possible, help the person get on the ground and turn them on their side, so “secretions will leak out of the mouth and not into the airway,” Dr McGann says.

Don’t force anything (such as your fingers or a spoon) into the person’s mouth to try to prevent them from biting their tongue, Dr Carius says.“That’s one of the more dangerous things you can do.” Doing so can cause the person to chip their teeth or choke. Seek medical attention for anyone who has a seizure for the first time. They should be evaluated in an emergency department so doctors can determine the cause and assess their health and mental status afterwards,Dr Bachmann says.