Researchers are continually finding that certain foods deliver an even bigger health boost when consumed together. Make the most of these nutritious foods by teaming them up 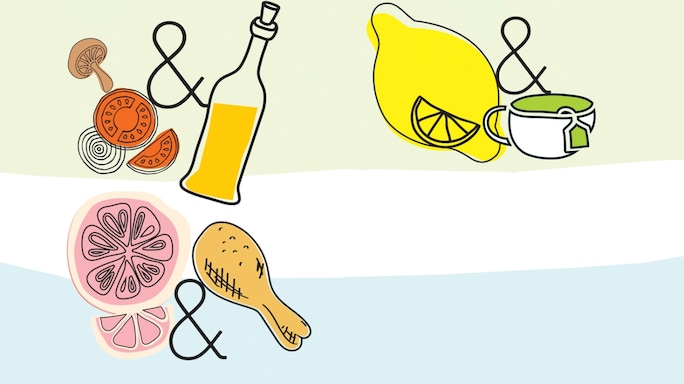 Make your pasta salad with a vinaigrette dressing. Vinegar contains acetic acid, which reduces the spike in blood sugar that occurs after consuming starchy foods high in carbohydrates such as pasta, rice and bread. A steadier rise in blood sugar reduces hunger by keeping you feeling satiated, as well as helping to minimize the risk of developing type 2 diabetes.Blood-sugar spikes are best avoided, so that your body isn’t secreting too much insulin in an attempt to manage them.Research in 2015 by the Max Planck Institute for Heart and Lung Research in Germany discovered that acetic acid activates the receptors that inhibit insulin secretion.

Italian researchers found that adults who consumed a glass of wine a day had higher blood levels of omega-3 fatty acids, which are found in fish such as trout, salmon, herring and sardines. (The same results were not found for beer or spirits.) The finding is from a 2008 study of 1,604 subjects from Belgium, Italy and England between ages 25 and 65.Scientists believe that heart-healthy polyphenol antioxidants in wine might be responsible for improved omega-3 absorption. Omega-3 fatty acids are proven to reduce your risk of experiencing a major cardiac event.

Iron is necessary for producing haemoglobin, which transports oxygen to muscles and the brain. Low levels of iron can lead to fatigue, fast heartbeat,headache and more. Iron from food comes in two forms: haeme (found in animal-based foods) and non-haeme(found in plant foods such as green beans, edamame, leafy greens and many others). But our bodies absorb far less non-haeme iron than haeme iron.Consume those non-haeme iron foodsalong with vitamin C, which is found in tomatoes, citrus fruit, sweet peppers,berries, etc. A Swiss study published in the American Journal of Clinical Medicine reported that adding vitamin C to a meal rich in non-haeme iron yielded an almost three-fold increase in our body’s ability to absorb the iron. Green tea has been shown to strengthen the immune system and, in animal studies, to reduce the growth rate of tumours. And the catechins found in green tea are powerful antioxidants that have a positive effect on cardio vascular health. There’s a way to further boost the power of those catechins, which are a type of antioxidant: add some citrus juice. According to a Purdue University report, adding a splash of juice from a lemon, lime, or grapefruit to green tea reduces the breakdown of its catechins in our digestive system,making them more readily absorbed by the body.

How about a lunch plate that includes pickled beets and sliced hard-boiled eggs? Choline is abundant in egg yolks (as well as in chicken liver); betaine is found in beets,spinach and some grain products.A 2010 American Journal of Clinical Nutrition study found pairing these two nutrients was associated with lower blood levels of homocysteine,an amino acid produced in the body.Elevated levels of homocysteine has been linked with declining cognitive function. The power combination may also protect against cancer, according to a review study by Nanjing Medical University in China in 2016, published in Scientific Reports

Adding a little peppery kick to your broccoli with some sliced radishes can maximize its antioxidant firepower. A 2018 Chinese study published in Food Science and Biotechnology stated that the addition of radish, arugula and rapeseed sprouts to broccoli sprouts could promote the formation of sulforaphane, broccoli’s signature antioxidant. Foods including radishes possess the enzyme myrosinase,which works to improve the formation of sulforaphane and its absorption rate into the blood. Research suggests that sulforaphane has strong anti-cancer power, particularly by preventing the expansion of cancer cells in the body. Give you more energy

Any dish made with chickpeas is tastier with onions, but the combination is also good for you.According to a 2010 study in the Journal of Agricultural and Food Chemistry, sulfur compounds in onions, garlic and leeks can help you absorb more iron and zinc from grains and legumes, including chickpeas. Iron is involved in the transport of oxygen in the body, so an iron deficiency can cause fatigue and ‘brain fog’. And as for zinc, a large body of research shows it’s effective in fighting the common cold. For example, a 2017 review study by the University of Helsinki in Finland found that the duration of cold symptoms were reduced by one-third for those who took zinc.

If you normally sauté vegetables in butter, consider switching to olive oil. Research from the University of Barcelona, published in Molecules in 2019, showed that when cooking onions, garlic and tomatoes in olive oil, the oil acts as a vehicle that boosts the bio availability of the vegetables’ components. In other words, heating this combination of ingredients, known as sofrito in some Mediterranean cooking, was shown to allow more of the vegetables’ polyphenols (which are antioxidants)into circulation in our body.

A 2018 study by Appalachian State University in North Carolina ,published in the journal PLOS ONE,shows that consuming both water and bananas is just as, or more, effective than a sports drink for exercise recovery. Bananas mimic ibuprofenin reducing pain and inflammation—thanks to boosting serotonin and dopamine levels—while the water rehydrates the body.

Poultry, beef, pork and fish are all top dietary sources of coenzyme Q10 (CoQ10). This power source for our body’s cells plays a vital role in the production of the energy we use for everything from digesting food to running on a treadmill. CoQ10 may also help control blood pressure in those with hypertension. A 2010 Japanese study discovered that eating grapefruit allows up to 50 per cent higher cellular absorption of CoQ10. Chicken roasted with sliced grapefruit,onions and other vegetables makes fora delicious family meal. But beware of eating grapefruit if you are taking certain medications—statins is one example, but talk to your doctor—as it can cause some medications to pass into your bloodstream too quickly,which could be dangerous.