The Promise of Intermittent Fasting

A popular diet trend works well for many weight watchers, and the benefits might extend beyond your waistline 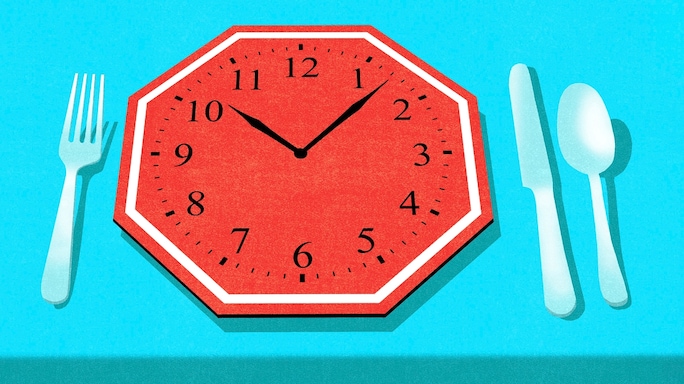 Like many people who put on extra weight, Jerico C. was surprised when it happened to him. A native New Yorker who loved walking around the city, he used to be able to eat whatever he wanted whenever he wanted and stay pretty thin. But then, well, life happened. A move to California meant more driving and less walking. His advertising sales job required company dinners and later nights.

Two kids left little time to think about healthy eating, and get ­togethers with his extended Filipino family meant lots of big meals. “When you welcome anyone into your home, it’s an automatic feast,” he says. Suddenly, Jerico turned 40 and found 199 pounds on his six­ foot frame. “I had to do something different,” he says. It was around that time that he came across a post on social media by a friend who had dropped about 60 pounds. How’d he do it? Jerico asked. IF, said the friend. “If? If what?” Jerico responded.

The answer was intermittent fasting (IF): fasting completely for discrete periods of time and eating most anything you want otherwise. That can mean fasting for parts of a day, a day at a time, or two days a week. Jerico decided to try an 18:6 plan, which meant carving out a six ­hour window—say, from noon until 6 p.m.—when he could eat whatever he wanted and then going the next 18 hours with absolutely no food (but unlimited water, coffee, tea and other non ­caloric beverages). Two and a half years and 25 pounds later (give or take a few, thanks to the pandemic), Jerico hasn’t looked back. “I like it a lot,” he says. “It has made me realize that our appetite is more tied to seeing food than needing it. I do miss breakfast food, though. In fact, I regularly have breakfast for dinner.”

No one would say that intermittent fasting is easy, but it has many advantages. There’s no counting calories, resisting snacks, cutting out food groups, or other challenges that come with restrictive dieting. Instead of focusing on what you eat as dieters do on Paleo(no processed foods, grains, or sugar),Atkins (low carbs), Whole 30 (no sugar, alcohol, grain, dairy, legumes), and other regimens, IF puts the emphasis on when you eat. “Rather than saying ‘Just eat less,’ we tell them not to eat after 6 p.m.,” says Elisabetta Politi, RD, nutrition director for the Duke Diet and Fitness Center. “For those who have the discipline, it works.”

No matter how long your fasting period, the metabolic impact on your body is similar. Typically, when we eat, our bodies break down the carbohydrates from the food and turn them into a form of sugar known as glucose, one of the body’s preferred fuels. Unused glucose is stored for later in your liver. So if you are eating three meals a day, your body always has energy on hand as well as a reserve it can tap.

But when you’re fasting, your body doesn't have a steady stream of food to turn into energy. That means it has to tap its reserves. After about eight hours, it depletes the stored glucose and needs another source of energy. This is when the body begins burning fat for fuel, explains Mark P. Mattson, PhD, adjunct professor of neuroscience at Johns Hopkins University School of Medicine in Baltimore. This, combined with the fact that you are likely taking in fewer calories during the shorter eating window, is going to help get rid of excess weight.

If those were the only benefits of IF, it would be worth a look for many people. But since the dieting fad has become more widespread in recent years, studies have discovered that its benefits can extend far beyond what you see on your scale. Research in Nutrition Journal revealed that IF reduces artery-blocking LDL cholesterol as well as triacylglycerol, which cause hardening and/or thickening of the arteries. Both arterial conditions are major factors in heart disease. A 2019 study in the New England Journal of Medicine reported that IF might ward off neurological diseases such as Alzheimer’s, Parkinson’s and Huntington’s. The theory: The plaques that clog neurons in the brain feed on glucose.

Not surprisingly, glucose reduction also benefits people with diabetes. A study published in 2018 in JAMA Network Open showed that the 5:2 diet(limiting calories to 500 to 600 per day for two days and eating regularly for five days) results in weight loss and improved blood sugar control for people with type 2 diabetes. These fasts may promote autophagy, a deep cellular clean-up that allows your body to purge old, damaged cells and replace them with new ones.

All that said, intermittent fasting isn't a miracle, and as with any strict diet regimen, you should consult your doctor and carefully weigh the benefits against the potential side effects.People with diabetes, heart disease, or gout should know that the lack of food triggers steep dips in blood sugar.

All types of fasting can cause headaches, fainting, weakness and dehydration, says Scott Kahan, MD, the director of the National Center for Weight and Wellness in Washington, DC. IF could backfire, leading to increased appetite and binge-eating, as well as a slower metabolism. And going without food is a recipe for being hangry—you may feel irritable on fast days, says Krista Varady, PhD, professor of nutrition at the University of Illinois, Chicago. What’s more, a randomized control trial published in a 2020 issue of the Journal of the American Medical Association found that most of the fasters’ lost weight was lean muscle, not fat.

Lastly, if you are under high levels of stress or in intense athletic training, consider steering clear. Especially avoid extreme 36:12 fasting, which calls for 12 hours of unlimited eating followed by 36 hours of zero calories.

“When you do any type of fast, part of the benefit comes from mildly stressing your body; just like when you lift weights, you damage the muscle to make it stronger,” says Robin Foroutan, RD, an integrative medicine dietitian in New York City and spokesperson for the Academy of Nutrition and Dietetics. “With fasting, you are stressing out the body, but it gets stronger in response.” And, if you stick to it, it can get thinner too.

—With reporting by Denise Mann, Kim Fredericks and Corey Whelan