Could fake medicine be as effective as the real thing? Michael Wharrad held the envelope in his hands,certain of what the paper inside would tell him.The then 72-year-old former investment banker in Kent, England, had been diagnosed with Parkinson's disease nine years earlier. Now it was 2017—a year since he had been in a trial at the National Hospital for Neurology and Neurosurgery in London. Researchers were testing whether a drug approved to treat type 2 diabetes could also ease Parkinson’s symptoms. Wharrad received a daily dose of either the drug or a placebo, but he didn’t know which.

During the trial, Wharrad had thrived. His joints ached less, and he could get up from a chair more easily and take walks around the block.Friends and family commented on his obvious improvement. And his score on a Parkinson’s assessment tool improved significantly. “My wife and I were convinced I was taking the drug,” says Wharrad.

But at his end-of-trial meeting with one of the researchers—who also didn't know whether Wharrad had been on the drug or not—he got a surprise. When he opened the envelope to find out what he’d been taking, he read the word ‘placebo’.Wharrad’s reaction was disbelief.“I was speechless,” he says. “I had been feeling so much better.” 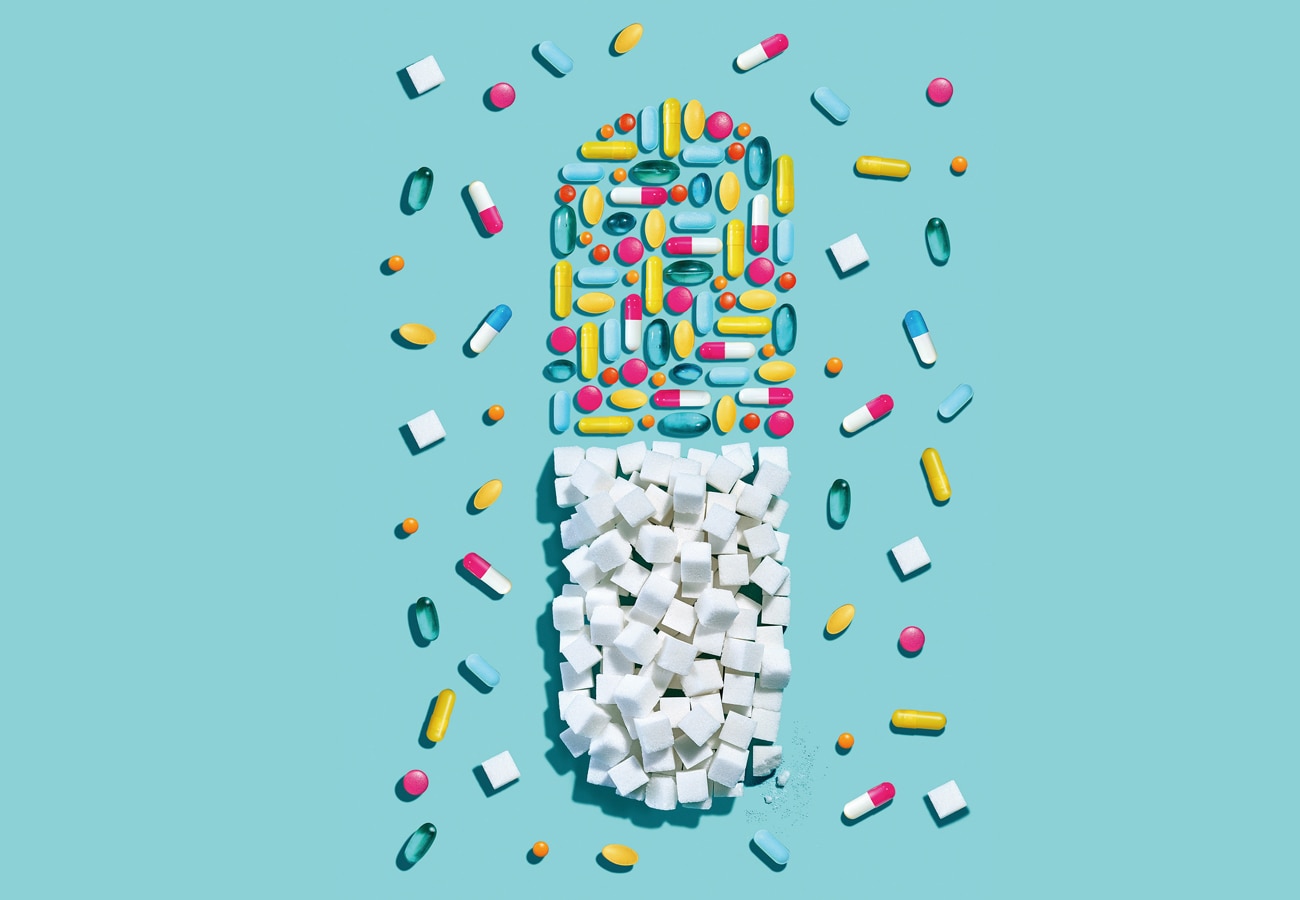 A PLACEBO can be a sugar pill, a saline injection or a glass of coloured water:inert treatments that shouldn’t produce a physiological response. But often they do; Wharrad’s case is not unusual. In fact, placebos are increasingly proving to be more powerful than active drugs in trials—and they may just be the key to reducing our dependence on medications.

The so-called placebo effect happens when the brain convinces the body that a fake treatment is authentic, which stimulates relief. Doctors have known of it for centuries, but in the past 50 years, neurologists have uncovered the molecular mechanisms and pathways at play when asham treatment creates real healing.

To a large extent, the phenomenon is still a mystery, but scientists have and they confirmed that simply perceiving that you’re being treated affects the same part of our brain that processes physical sensations such as symptoms. They have also confirmed that measurable improvements can occur when only a placebo is administered.

“We can observe spikes in brain activity and changes in neural discharge with a placebo treatment,”says Luana Colloca, a medical doctor and a professor at the University of Maryland’s department of anesthesiology. Researchers have also seen that in medical trials to prove drug effectiveness fewer drugs were beating the placebo groups—as if the placebo effect were growing stronger. A 2021 Danish meta-analysis showed that more than half of the treatment effect in some 180 drug trials could be attributed to the placebo.

Placebo research is now its own area of study, and experts say we should harness the strategies that generate the most powerful placebo effects in drug trials and incorporate them into clinical treatments for patients suffering from a range of chronic conditions.

Since the body–brain response that controls the placebo effect is neurological, placebos work best on conditions like pain, irritable bowel syndrome,depression and Parkinson’s disease—all controlled by the neurological system. Placebos can’t change things like a viral infection; they won’t lower your cholesterol, shrink a tumour or reduce a cold’s duration.

Research has shown that when placebos do work, expectations play a significant role: If you think a pill can cure you, it is more likely to do so. In a 2004 Lancet review of placebo studies, researchers described one study in which post-surgery patients were given morphine for pain. For some,the medication was delivered secretly with a hidden pump, while others received it from a physician who explained it would make them feel better. The patients expecting the drug and its positive effects experienced far greater pain reduction than those who were unaware they had received it.

Placebos can also work as a result of ‘pharmacological conditioning—when clinicians teach a patient how to respond to a placebo by first administering an active treatment.A 2015 review published in the journal Pain found that in many studies, patients given several doses of areal painkiller followed by a placebo responded to the placebo as if they had received the analgesic—though they were never told which one they were given.

Dr. Colloca says this can result in the strongest placebo effect. “When we start with an active treatment or intervention, the placebo effect is larger and more durable,” she says.Studying this across a range of conditions, Dr Colloca has observed via fMRI scans and other objective measurements that placebos use the same neurological pathway of the brain that the medication did.

“The placebo response is like a pharmacological memory activating the same part of the brain,” she says.

This specificity means that placebos for depression activate serotonin, and those replacing painkillers reduce activity in the brain centres responsible for pain while activating the opioid systems, or pleasure centres. Your brain is tricked into generating a drug response.

Just As Good As Meds?

Placebos are so powerful that they’re affecting the way medications get tested. To prove a drug works,scientists must show it performs significantly better than a placebo in a randomized, double-blind, placebo-controlled trial (in this type of trial,neither the researchers nor the participants know who is receiving what).

Over the past two decades, scientists and drug companies have noticed that placebos are helping patients so much that some drugs can no longer outperform them—not because the drugs are less effective but because the power of mind over body seems to be growing.

While this increase is not well understood, says Lene Vase, a professor of neuroscience and psychology at the Aarhus University in Denmark, it’s presenting a problem for drug companies. “Some drugs that were approved in the past would not beat a placebo today,” she says.

This phenomenon seems to be strongest in the United States. For example, in 2019, the pharmaceutical company Intra-Cellular was on the verge of a major development. It was testing the drug Lumateperone as a bipolar disorder treatment; it had performed well in earlier trial phases,and the company’s scientists were expecting success.

Yet in the American arm of the trial,patients who received the drug and those who received the placebo both experienced significant improvement.When Intra-Cellular released its findings showing the drug had failed to consistently outperform a placebo,its stock dropped 22 per cent—although the drug was later approved in the United States due to successes in other countries.

Professor Jeffrey Mogil of McGill University in Montreal isn’t surprised;he published a study that found the placebo effect has indeed been increasing, particularly in the United States. “Maybe these drugs work,” says Mogil, “but we can’t prove it because they can’t beat the placebo response,which has been amplified.

”Why? Mogil posits that because American drug trials are often well-funded and hosted in nice clinics, the patient is conditioned to believe that since the company is spending a lot on the drug, it must work.

Neuroscientist Alexander Tuttle,a co-author of the McGill study, hypothesizes that advertising also plays a part: Americans who view ads depicting patients helped by pharmaceuticals could be more likely to believe the pill they take in a trial will heal them. (The United States is the only country besides New Zealand that allows pharmaceutical companies to advertise prescription medication directly to consumers.) A Case For Honesty

But can placebos work if patients know they’re taking one? Ted Kaptchuk,director of Harvard University’s Program in Placebo Studies and Therapeutic Encounter, has been a trailblazer in the field for decades,and in 2010 he explored this question.“All my colleagues said, ‘You can’t tell a person they are receiving a placebo and expect it to work,’” he says.Kaptchuk’s team gave some patients with irritable bowel syndrome in active pills labelled ‘placebo’. Those patients experienced a 60 per cent improvement to their condition,while those receiving no treatment improved only 35 per cent.

It may sound unlikely, but the effectiveness of ‘open-label placebos—sometimes also called ‘pure’ placebos—has also been shown in numerous other studies. “The key ingredient to successful treatment with a placebo is honesty, not tricks,” asserts Kaptchuk.

Already, without telling patients,some doctors are prescribing something that they know is unlikely to treat their patient’s ailment—a vitamin or antibiotic, for example—but that may generate a placebo effect.

In fact, a 2018 review of studies from13 countries found that anywhere from 15 to 89 per cent of physicians reported using placebo treatments at least once a month. Doctors surveyed said they sometimes do this to treat non-specific complaints, or to satisfy patients’ demand that something be prescribed. The hope, then, is that open-label placebos could replace this ethically murky practice.

“Use of open-label placebos would reduce the amount of medication we use for common conditions,” saysKaptchuk. But he and others have found that for open-label placebos to do their job, the patient must trust their physician. This, alongside the rituals of medical care—the visit to the clinic, the act of paying for a prescription—make the treatment work.

Fabrizio Benedetti, a placebo studies expert and professor of physiology and neuroscience at the University of Turin in Italy, agrees the doctor-patient relationship “can make a huge difference in therapeutic outcomes.”He believes it’s the most immediate way we can incorporate the placebo effect into practical treatments.

Knowingly taking a faux treatment is clearly not for everyone—Wharrad,for instance, isn’t convinced he would have experienced the improvements in his Parkinson’s symptoms had he known he was taking a placebo during his drug trial. But a 2016 American study published in BMJ Open found that up to 85 per cent of the 853 respondents felt it was acceptable for doctors to treat with open-label placebos in various scenarios.

In 2017, Benedetti, Vase, Kaptchuk,Dr. Colloca, and 26 other placebo researchers gathered in the small Dutch city of Leiden to begin developing official recommendations for doctors’ use of open-label placebos, some of which were published in the journal Psychotherapy and Psychosomatic last year. They include informing patients about placebo effects, fostering warm,trusting, and empathetic patient-doctor relationships, and training physicians to communicate in a way that maximizes placebo effects. The goal is for the recommendations to be put into practice by health organizations worldwide.

“What we are proposing is that the placebo is a legitimate therapy if it’s honest, transparent, and has informed consent,” says Kaptchuk.“That’s a radical shift in medicine.”

The lives of some people who have participated in open-label placebo studies are already being improved.Troy Mack, a 57-year-old resident of Baltimore in the eastern United States, had been suffering for two decades from intense pain in his face,neck, and jaw from temporoman-dibular (TMD) joint disorder. When University of Maryland researchers,including Dr Colloca, announced a study of an experimental TMD treatment, Mack was told that based on his medical history he might be a good placebo responder.

That prediction turned out to be correct. After just a week of knowingly taking a placebo, most of Mack’s jaw pain disappeared. His face felt more relaxed, and the joint no longer cracked when he yawned. He was finally experiencing relief.

“If I could get a long-term prescription for this,” says Mack, “I’d take it.”