Let's Go for a Walk 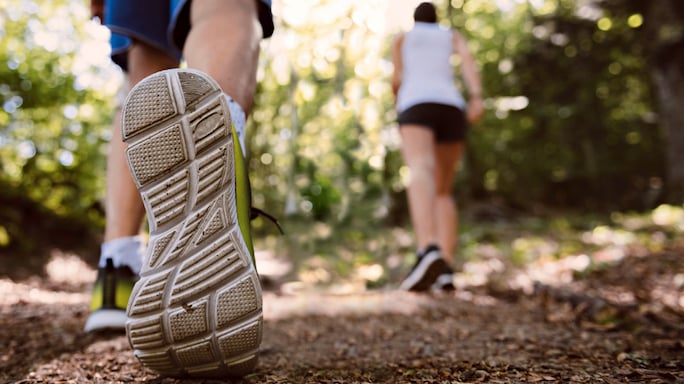 Until recently, the idea of going for a walk for fun never crossed my mind. I preferred mountain biking or skiing. But in July 2019, my fiancé, Andrew, 34, was hit by a van while riding his bike. He survived—just barely—but his left leg was paralyzed. He came home from the hospital in October. Wearing a rigid, full-leg orthotic brace and wielding forearm crutches, Andrew ventured out in our neighbourhood in Boulder, Colorado. Initially, going up and down the block exhausted him. But by February, he was able to unlock the knee joint of his brace and stabilize his leg on his own. By mid-March, we were walking up to 90 minutes at a time.

When COVID-19 came to Colorado, the ski resorts, breweries and many other vestiges of normalcy began shutting down. Suddenly the streets were filled with people who were also just … walking around. Couples sauntered. Families with young children trooped the sidewalks. I started walking on my own, too.

Each evening, I’d get on a local trail. I drew deep breaths of the damp, piney air, and gaped at the panoramic views of the Flatirons [rock formations] jutting up over the horizon. The walks seemed to loosen my thoughts, bestowing clarity and inspiring ideas that I jotted down trailside in my phone.

But as much as I enjoyed my new walking habit, I was conflicted about it. Walking with Andrew was a wonderful way to spend time together. But when I wasn’t with him, well—I was an athletic, fit 36-year-old. Shouldn’t I be doing something more vigorous?

Billed for so long as a gentle, slow-speed form of exercise for older people, or for those looking to lose a little weight, walking had lost its appeal to much of the younger, outdoorsier set. But maybe all this stemmed from a fundamental misunderstanding of why we walk at all.

The history of walking as a means of liberating the mind spans cultures and centuries. Great thinkers from Nietzsche to Kant to Thoreau to early-feminist philosopher Simone de Beauvoir had walking practices. The hajj, the Muslim pilgrimage to Mecca, often involves walking several kilometres per day. Thru-hikers traverse entire continents in search of challenge, adventure and self-knowledge.

“There is a lot of research on creativity while walking,” says Jennifer Udler, a therapist in Potomac, Maryland, who practises ‘walk and talk’ therapy with her clients. “Our dopamine, our serotonin, all the feel-good chemicals, are being released when we walk. And that’s not just mood. It’s creativity, it’s de-stressing, it’s lowering cortisol—there’s a lot of chemistry involved in this.” A 2014 study at Stanford University, for example, asked participants to come up with novel uses for common items like a tyre or a button. Researchers found that the number of creative ideas generated increased by roughly 60 per cent while participants were walking, compared to when they were sitting.

Udler points to a growing body of research examining the therapeutic benefits of simply being in nature. One 2018 study found that walking outdoors reduces cortisol and improves your mood more than, say, exercising on a treadmill. “I have to say, it takes away half my job,” Udler says, laughing. “Because people are just naturally feeling better.”

The best reason to walk, though, is because we can. I began to be impressed with the biomechanics of walking well before Andrew’s crash, when I was reporting a story about professional mountain biker Paul Basagoitia, who had sustained a spinal-cord injury that left him paralyzed below the waist. A year after his injury, Paul regained the use of his quads and hamstrings, and he could ride a bike. But because his glutes and calves still don’t work properly, he uses a cane to get around day to day. “Believe it or not, it’s a lot easier to pedal a bike than it is to walk,” he told me.

As a mountain biker myself, I marvelled at the idea that this placid activity was in some way more demanding than the sport I spent 10 to 12 hours a week training for.

Then Andrew’s crash happened. When he began taking his first steps in the rehab hospital with his leg brace and a walker, the effort of hoisting his left leg forward made him grimace. I suddenly understood that I performed miraculous feats countless times a day: shuffling sleepily out of my bedroom each morning, navigating a parking lot, striding down the street.Here’s what it takes for you to take a single step, according to Dr Jessica Rose, director of the Motion and Gait Analysis Laboratory at Stanford University’s children’s hospital: as you step forward, just before your foot makes contact with the ground, the glutes, hamstrings, and quads activate to stabilize the hip and knee. As your foot touches down, your weight shifts to that limb, the ‘stance limb’. The stance-limb calf muscle activates to stabilize the ankle and knee, controlling the forward progression of your center of gravity over your foot. As weight shifts to your forefoot, it allows your heel to rise, initiating the ‘swing phase’ of walking.

At this point, you need to bend your hip and knee quickly to lift your foot off the ground. Your other leg is your new stance limb. Now the hip flexors and ankle dorsiflexors get involved to swing your leg through swiftly. At the end of the swing, your hamstring controls the speed of your knee extension. Your foot then makes contact with the ground, beginning the cycle again. None of this, by the way, even gets into the upper-body biomechanics of a normal gait: opposing arm swing, balance and proprioception, which allows you to place your foot on the ground without looking at it.

We take this mind-boggling sequence for granted. But anyone who’s nursed even a minor injury like an ankle sprain becomes acutely aware of what you lose when just one link in the chain is broken.

That Christmas, Andrew and I went to Sedona, Arizona. Even the easiest trails had obstacles. As I watched Andrew use his crutches to hoist himself up stairstep boulders and totter precariously over mellow creek crossings, I became acutely aware of the flexing, tensing and balancing happening in my own body to move over this uneven terrain.

We pushed Andrew’s limits so much that the rivets popped out of his leg brace, requiring two visits to the local orthotist to get it repaired. But we felt grateful. None of the trails we did, none of the spectacular scenery or the soul-soothing solitude, would have been accessible in a wheelchair.

A month after Colorado went into lockdown, I started feeling motivated for bike rides again, rebuilding my muscles and lungs after a long winter. My solo walks got more sporadic.

But I still walked with Andrew on weekends up forested dirt roads. We talked—my worries about work, his dreams about the future, our conflicts with loved ones. We ran into friends, and even made new ones.

One evening, after a late-spring snowstorm, I went for a trail run. A couple miles in, my run slowed to a walk. Birds trilled. Water trickled—the snow melting. My gaze, no longer fixed to the ground, took in the towering ponderosas along the trail. After a day spent at my computer, they looked achingly real. I felt myself becoming real again, too, reinhabiting my body.I knew then that walking isn’t just exercise to me. As a society, we treat exercise as an antidote to our sedentary lives. We dose it like medicine: apply exercise once daily. But what if walking was simply a way to spend more of our lives in motion? This year, I’ve taken phone calls with faraway friends on walks, used walks to break through writing blocks and rehearse for difficult conversations. I wasn’t just exercising. My life was happening.

If walking is something most of us only learn to do as we get older, then I welcome this early wisdom. I want to notice the things I never saw when I was rushing. I want to take time to consider which way I’m going.

That day, I left the trail to crunch through the snow’s brittle upper crust, feeling the muscles in my body tense and snap and release, nerves firing in a thousand unconscious places. I passed between the trees, nimble and free. It felt good to move as I was designed to do. The body got a little light exercise. The soul got much more.