Dial Down Your Migraine

Preventing and coping with the worst kind of pain 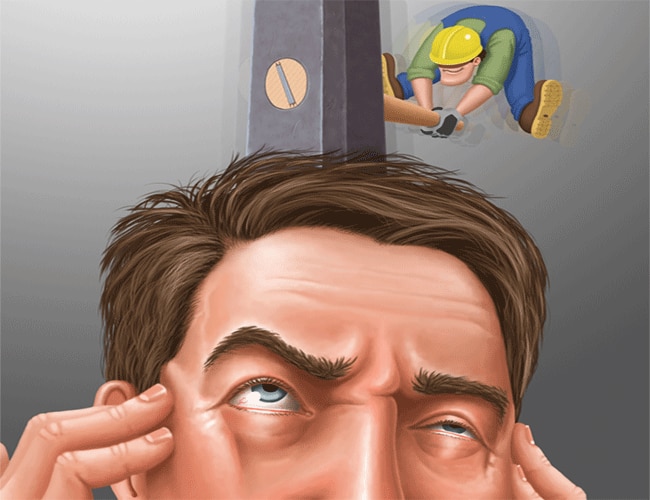 A migraine is a moderate to severe form of headache, with recurring bouts. The pain usually manifests itself on one side of the head and described as throbbing. It is associated with other symptoms, such as nausea, vomiting, sensitivity to light or sound and occasional visual disturbances. Obviously, it is more than just a headache.

"Migraines are an interplay of genetics and environment. Their frequency and severity is determined by genetic predisposition, and the number and extent of environmental triggers an individual is exposed to," says Dr Rajashekar Reddi, principal consultant, neurology, at Max Super Speciality Hospital, Saket, New Delhi. A migraine is surprisingly common---about one in five women and one in 15 men experience it. It's not clear why it's more common in women, though it's thought to be linked to hormonal changes around the menstrual cycle. "These kind of migraines are known as catamenial migraines," says Reddi.

There are different types of migraines: those with an aura and those without them. The 'aura' is a set of symptoms---visual disturbances like flashes or shimmering light and blind spots in your field of vision---that are specific to an individual that warns of an impending attack. There are situations where a migraine aura may come on, but the actual headache may follow later. The attack's frequency varies for each individual, with some people suffering several a week and others free of them for months or years.

The exact cause of migraines isn't fully understood, though it's often thought to be an abnormal brain activity that affects blood vessels in the brain. However, it's not clear how or why this happens. Many people can identify triggers to a migraine-foods like cheese, particularly with the food additive tyramine, caffeine in drinks or chocolate as well as alcohol. "It is best to maintain a headache diary to identity one's triggers. This will help a patient make lifestyle and behavioural changes that would help reduce the number of attacks," Reddi suggests. Low blood sugar and hormonal changes associated with periods can also bring them on, as can psychological triggers such as stress or depression. Some people find that sleep-inducing medication or an oral contraceptive pill makes them more susceptible to an attack. Other triggers include sleep deprivation and erratic eating patterns.

HOW IS IT TREATED?

Unfortunately, there is no cure for migraines. However, over-the-counter painkillers do help. It's best to take these at the onset of the symptoms, rather than waiting for a full-blown attack. "Do keep in mind that sometimes medicine overuse can also cause a rebound headache. The best way to tackle migraines is through a combination of preventive therapy, lifestyle modification and medication," adds Reddi. The painkiller triptan is often prescribed by doctors as it contracts swollen blood vessels, which are thought to induce migraines. Anti-sickness medication helps as well. If none of these ease the pain, then it's time to consult a specialist. "A specialist may prescribe beta-blockers or tricyclic antidepressants or anticonvulsant drugs. Botox is also recommended for individuals who have chronic daily headaches (CDH) that occur for about 15 days every month for three months," says Reddi.

WHAT CAN THE PATIENT DO?

Many patients find avoiding triggers is the easiest way of managing their migraines. During an attack, most people find lying in a dark, quiet room helpful. For others, a cool relaxing shower works better. Sometimes, placing an ice pack on the nape of one's neck eases the pain. Usually what works is taking all the above-mentioned steps at the same time.

It's also important to realize when you need to seek help immediately. Symptoms including paralysis or weakness on one side of the body or slurred or confused speech are indications of a stroke. If the headache is a sudden, blinding one, it could be a possible bleed on the brain, which needs immediate medical attention. A headache accompanied by a stiff neck and/or a rash may turn out to be meningitis. In these situations, it is best to rush to a doctor.

-with inputs by Gagan Dhillon