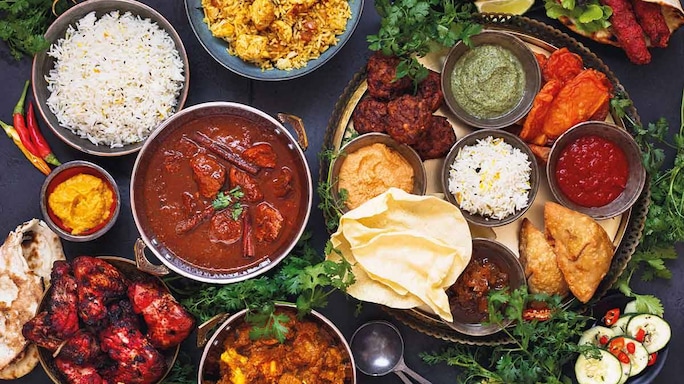 The political map of India demarcating different states—carved out on a linguistic basis, strategic reasons or political expediency—isn’t perhaps the best prism to appreciate the colourful spectrum of Indian cuisines. A better access to this resplendent inheritance is provided by the concept of ‘zones of taste’ roughly corresponding to the geographical regions celebrated in our national anthem: “Punjaba, Sindhu, Gujarata, Maratha, Dravida, Utkala, Banga”, and so on. India’s identity, its gastronomic footprint, can’t be confined by boundaries drawn by man.

The diversity of streams that have intermingled to create a delightful confluence, resembling a great river system, is remarkable. It is futile to look for a mainstream or to arrange cuisines of different regions in a hierarchy. For millennia, ingredients and influences (cooking techniques) have travelled across the length and breadth of this land with intrepid traders, soldiers of fortune, marching armies, pilgrims and scholars. The Indian genius lies in imbibing diverse influences without losing its own moorings. India is no ‘melting pot’ homogenizing all that is put in it; Indian foods from different regions are best seen like musical notes that contribute to a mesmerizing melody.

The zones of taste are easily identified by the staple cereals: rice, wheat or millets; preferred cooking mediums—mustard, sesame, peanut or coconut oil; most popular souring and sweetening agents. Using these ‘filters’, we will discover that the food footprint of any state extends to the adjacent districts of its neighbouring state.

While it may appear that food reinforces separate identities, at times leading to discord, a closer look reveals that the strength of our socio-cultural fabric is strengthened by the diversity of threads with which this rich tapestry is woven. Saffron from Kashmir is used to prepare kesari bath deep down south, and aromatic spices from Kerala—peppercorns, cardamom and cloves make the food redolent in other distant kitchens. Tandoori delicacies have proliferated in post-Partition India, are now popular in almost every state. The same is true of the south Indian dosai, idli, vada, sambar and rasam. Mention ‘sweets’ and the prefix ‘Bengali’ springs to mind immediately. There are other geographical indicators: Bikaneri bhujiya, Hyderabadi biryani, Awadhi gilawat kebab, Benarasi paan—the list is endless. Fusion has taken place effortlessly to create paneer dosa, paneer dhokla sandwich and tandoori momo.

It’s fascinating that Indian food is an integral part of the shared identity of different communities that add up to more than 1.35 billion people. Microscopic segments like Parsis, Bohras, Sindhis and Anglo-Indians have lovingly preserved their foods and culinary traditions for centuries, through vicissitudes. There are others like itinerant-migrant Marwadis, settled in different parts of India, who have influenced the eating habits of locals. There are also many myths that need to be dispensed with. Not all Brahmins and Vaisyas in India are vegetarians—recall Kashmiri Pandits, Maithil and Saraswat Brahmins and the descendents of Chetttinad merchant princes. Within a small state like Kerala, half a dozen culinary streams coexist happily without muddying the waters.

What we are witnessing currently is a revival of interest, particularly among the youth, in our roots. This, at times, expresses itself as parochial prejudice and misplaced ethnic pride. We should, perhaps, begin to turn our gaze to branches that reach out in different directions from the trunk of the grand banyan tree to strike out roots elsewhere; extending the area of the canopy that provides shelter and shade.

The author is a former professor at the Jawaharlal Nehru University. He has spent the last two decades documenting the rich diversity of Indian cuisine.