These youngsters are fighting for a better future There’s no denying that the global youth have, over the years, emerged and evolved as one of the most important building blocks of modern society. They have, over the decades, fought and inspired in myriad ways—be it in the field of education, science or social service, among others.

At the same time, it is immensely concerning that the younger adolescent generation continues to be misunderstood, misrepresented and even oppressed in countries around the world. Perhaps, it is was with the intention of addressing this injustice that the General Assembly of the United Nations (UN), in 1999, decided to endorse a 1998 recommendation by the World Conference of Ministers Responsible for Youth to declare and observe August 12 as International Youth Day.

In the words of the UN itself, the aim is to give “an opportunity to celebrate and mainstream young peoples’ voices, actions and initiatives, as well as their meaningful, universal and equitable engagement.”

On the occasion of International Youth Day 2020, Reader’s Digest takes a look at a few inspirational youth crusaders, activists and influencers in India and around the globe who have sparked change: A pro-democracy campaigner in Hong Kong and the Secretary-general of the now-disbanded Demosisto Party, the 23-year-old political activist rose to prominence in 2014 for leading classroom boycotts in the country’s push for the right to self-determination and elect their own representatives during the Umbrella Revolution to grant the Hongkongers the right to elect their own leaders without any intervention from the government of China.

Wong has organized several student and political movements previously. In May 2011, he, along with Ivan Lam, founded Scholarism, a pro-democracy student party that opposed the Hong Kong government’s Moral and National Education school policy that painted the Communist Party of China in a deceptively favourable light by sidelining the controversies it had been embroiled in. The party started out small, but by 2012, Wong and his party was able to mobilize over 1,00,000 people to protest the appointment of C. Y. Leung as the new Chief Executive of Hong Kong.

After the dissolution of Scholarism in 2016, Wong, along with other Scholarism leaders such as Agnes Chow and Oscar Lai, created the pro-democracy youth-activist group, Demosisto. The group, which “advocates democratic reforms, progressive values and self-consciousness of Hongkongers in the city” played a significant role in the 2019-20 Hong Kong protests against Chinese excesses in the region. Wong and his group were again actively involved in movements in the run-up to the imposition of the new draconian Hong Kong security law that was imposed on June 30. Sadly, the move forced the party to disband.

But Wong is no stranger to adversity; neither has he bowed down to any of them. He has been detained and has courted arrest several times already—and every time, he has found a way to hit back at the authorities. This time too, it can be hoped that he will emerge stronger than before. 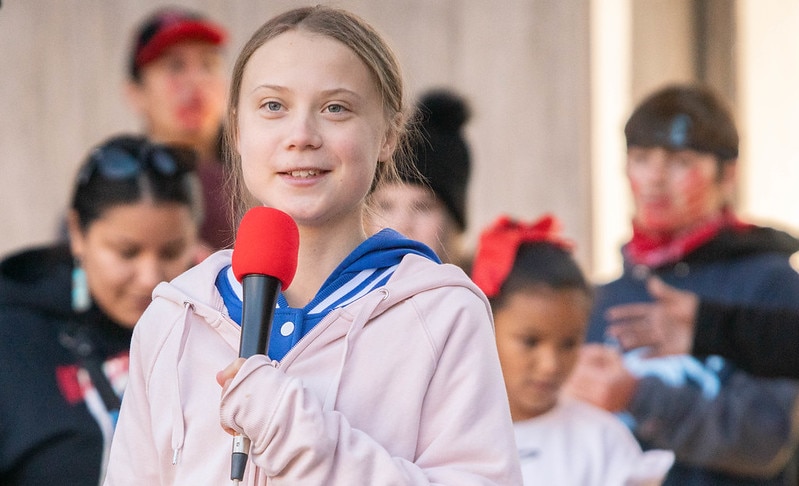 They say that youths are the beacons of a bright future. Climate activist Greta Thunberg certainly fits the mould.

It takes a lot of courage and conviction for a 15-year-old to not just boycott her classes but also start protesting against government inactivity. And yet, that is exactly what Thunberg did, in 2018, when she started urging the Swedish Parliament to take stronger action against the burgeoning climate crisis. Her call resonated with thousands of students in Sweden and around the globe, culminating in the extremely impactful Fridays For Future movement that sprouted branches in several countries, garnering widespread attention. Before she embarked on her mission, however, Thunberg had already convinced her parents and family members to adopt a lifestyle that would leave a minimal carbon footprint.

A powerful, emotional speaker, known for her straightforward, hard-hitting words, Thunberg would, from 2018 onwards, deliver several relevant, insightful speeches at global platforms across Europe and the US to highlight just how detached we have become from climate issues.

In 2019, she had addressed the World Economic Forum at Davos where she delivered the brilliantly striking ‘Our house is on fire’ warning. To further drive her mission of reducing carbon emissions, Thunberg also sailed from England to the US on a 15-day voyage in August. The following month, at the UN Climate Action Summit in New York City, she conveyed a harrowing message for the world leaders: “This is all wrong. I shouldn't be up here. I should be back in school on the other side of the ocean. Yet you all come to us young people for hope. How dare you! You have stolen my dreams and my childhood with your empty words. And yet I'm one of the lucky ones." That same autumn, thousands of students in countries, including India, joined Thunberg in a series of global protests advocating measures to address the climate crisis.

Thunberg suffers from a host of ailments, ranging from depression to Asperger syndrome. But these obstacles have not slowed her down by any means. Her efforts have earned her two much-deserved Nobel Prize nominations in 2019 and 2020. An inspiration, indeed! “I tell my story, not because it is unique, but because it is not. It is the story of many girls.”—so said the then 17-year-old Malala Yousafzai, when she received the 2014 Nobel Peace Prize, becoming the youngest-ever recipient of the prestigious prize in the process.

Today, the 23-year-old Yousafzai is an Oxford University graduate. Her story of fighting back is inspirational and shows exactly what the undying will and spirit of youth can achieve. Born to a doting father determined to give her every opportunity that would have been available to a boy, Yousafzai has always been a vocal proponent of girls’ right to education and learning. Even in 2008 when the Taliban curtailed girls’ rights to attend school in the Swat Valley, she continued to speak courageously and publicly, despite risks to her life. In October 2012, however, she was singled out by a gunman on a school bus, as she was returning home, and shot on the left side of her head. The life-threatening injury meant that she had to be taken to England for an emergency operation. She woke up at a hospital in Birmingham 10 days later.

Yousafzai has mentioned that she could have carried on with her life, but her memories of her school friends and several other girls in deplorable conditions and the hardships they endured motivated her to set up the Malala Fund in 2013, with her father. The Fund champions the cause of 12 years of free, safe and quality education to girls around the world.

The young activist, who travels the world delivering lectures, unveiling educational programmes and interacting with global leaders, achieved a personal milestone in 2020 when she graduated with a Bachelor of Arts degree in Philosophy, Politics and Economics from Oxford University. May she shine brighter. They say age is just number and of no concern to today's youth. Take eight-year-old Licypriya Kangujam for instance.

The young climate activist hailing from Manipur has been campaigning to raise awareness about the climate crisis in India, since 2018. Her tryst with climate activism can be traced back to 2015 when she accompanied her father to fundraising events for those affected by the devastating earthquake in Nepal. However, her sense of need for urgent action was reinforced further when she attended a UN disaster conference in 2018.

Since then, Kangujam, who “feels sore for people who cannot help themselves when disaster strikes”, has waged a battle, often solitary, against the climate crisis in India. She insists on the need to bring down pollution levels, especially air pollution, in Indian cities and states, as well as tough laws to govern such efforts. To that effect, she has designed a symbolic survival kit, the Sukifu device, to drive forth the importance of controlling and reducing pollution. She is also a vocal proponent of making climate change a mandatory subject in school syllabi.

Despite sharing some similarities and being good friends (by her own admission) with Greta Thunberg, Kangujam refuses to be compared with her. However, in what was , perhaps, a coming together of the two stars, the two activists met last year at the UN climate change conference, COP25, in Madrid in December. Five years ago, when 12-year-old Payal Jangid came to know that her parents were on the verge of marrying off her sister and her, she refused to accept the fate imposed on her.

Not just that, she was determined to change the orthodox mindsets of the villagers in Hinsla, Rajasthan. Jangid’s fight was not an easy one. Child marriage was a long-standing tradition considered auspicious by many in her village. The village elders were rigid, inflexible and would not take kindly to Jangid’s earnest efforts.

Still, Jangid soldiered on. She was inspired, in part, by the efforts of Nobel-Prize recipient Kailash Satyarthi and his wife Sumedha Kailash in ensuring children’s rights to education, health care and protection against exploitation. Furthermore, the Bachpan Bachao Andolan (BBA), in 2012, had declared their aim to turn Hinsla into a child-friendly village.

Jangid found herself automatically drawn to the BBA’s efforts and programmes. By 2013, Jangid had become the sarpanch of the Bal Panchayat (Children’s Parliament)—a platform where children could talk freely about their problems to a leader they elected. The concerns were duly noted and Jangid interacted with the village panchayat to find solutions. She also held protests and organized awareness programmes on the ills of domestic abuse, child labour, ghoonghat pratha [purdah] and early marriage. The Satyarthis, for their part, played a major role in stopping Jangid’s marriage.

Despite facing stiff opposition, Jangid was finally able to prevail—earlier this year, in January 2020, it was found that the village did not record any instances of child marriage and child labour in recent times. By then, her heroic efforts had already earned her the Goalkeepers Global Goals Changemaker Award from the Gates Foundation in 2019—the first  for an Indian.