Home for the Holidays: The Truth about the Man in Red 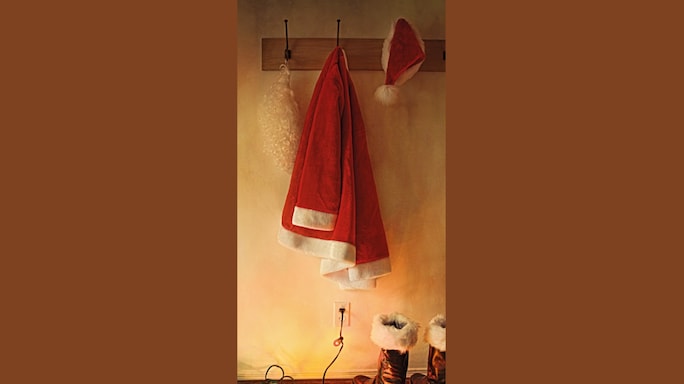 That was the night before Christmas, and all through my head, were the haunting three words my friend Julia said:

It was 1994, and at age nine I was way too old to still believe in Santa Claus. And yet, blindsided by Julia’s casual response to my Santa enthusiasm that year, I doubled down and branded Julia a liar. After all, movies had taught me that Christmas magic outweighed what I’d already begun suspecting as fact. What did she know, anyway? I had it on good authority that one year, my dad heard sleigh bells and hoofs on our roofs himself.

But by Christmas Eve, I was consumed by the feeling that Julia wasn’t wrong; that the concept of Saint Nick didn’t really make sense, and that there was no way the mall Santa I was staring at while standing next to my parents could possibly make it to the North Pole and back to Cambridge, Ontario, by nightfall. My dad headed off to buy a new suit for the holidays, and my mom led me to Shoppers Drug Mart. I gazed at the chocolate while analysing the Christmas music playing over the store speakers. With each mention of Santa Claus or red-nosed reindeer I started to feel warm. Sick. Like I’d stumbled upon a truth I was never meant to know, and would be forever cursed by its effects. I silently followed my mom up to the register, and felt the words rising, knowing there’d be no turning back once they tumbled out.

“Mom,” I said, as the cashier rang us through. “Are you and Dad Santa?”

The cashier began scanning items faster and faster, her widened eyes glued to the digital display. I didn’t wait for a response before pressing on.

The cashier was moving at record speed, desperate to get me and my impending meltdown out and away. My mother, forever honest, simply looked at me. “Well, sweetie, what do you think?”

That was enough. I wasn’t stupid. Neither of us was. So as if I were Willem Dafoe in Platoon, experiencing a slow death at the hands of his enemies, I crumbled under my new cold, cruel reality, devoid of magic, and I wailed for my lost innocence. Which is what I was still doing as we walked across the con- course to Tip Top to meet my dad, who was revelling in his new blazer.

“What do you guys think—” he started to ask, the grin on his face vanishing as he saw me in tears. “Oh my God, what

now?” My mom gave a simple, grave answer: “She knows.”

“SANTA’S NOT REAL!” I wept among the pleated slacks, button-ups and sensible sports coats, all while trying to hide my outburst from the salesman whose biggest concern was now whether my dad would be going through with his purchase. (He did.) By the time we made it to the car, I was crying quietly, gazing out the window and vowing never to forget the pain their deception had caused.

At home, I sat miserably on the living room floor, reconciling with the fact that our Christmas tree was an obvious farce; an empty symbol that was no longer a testament to Santa’s generosity. I bet my parents had even eaten the cookies and milk I’d left under it simply because they could.

“You know,” my mom said as my dad tended to his new tweed treasure, “I know this is hard, but now you’ve got to help keep the magic alive for your little cousin. You get to help make her Christmases feel extra special.”

This made me perk up. Suddenly, I understood the true meaning of Christ- mas: not presents or folklore or the man in red, but power. The power to give and the power to take away. As my first act of this newfound adulthood, I agreed never to ruin Santa Claus for anyone. But I also vowed to keep tabs on my enemies—like Julia who tried to strip me of the magic of Christmas and would always be on my naughty list. A list even more powerful than Santa Claus’s.