Home for the Holidays: A Coffee For Santa

For our first December in a new land, my parents arranged a special surprise I was four years old in 1993 when my family emigrated from the United Arab Emirates to Canada. I was young enough to be changed

by my new home, but old enough to know I was different from everyone around me.

I was the only Arab and only Muslim in my kindergarten class in suburban Toronto. No one else had a name like mine, and no one else spoke Arabic (my English back then was rudimentary at best). Beyond those obvious differences, Canadian life proved to be quite distinct in other ways. After recovering from the shock of the teeth-chattering cold and waist-deep deluges of snow of my first Canadian winter, I discovered another surprise that December.

Overnight, everything was suddenly covered in red and green. Storefronts were decorated with string lights wrapped around pines and firs, shop- ping malls echoed with songs about a red-nosed reindeer named Rudolph, and my classmates chattered excitedly about what gifts they’d asked Santa for that Christmas.

At some point, I must have asked myself, What is Christmas? There’s nothing quite like it in the Muslim world. The closest comparison might be Eid al-Adha, which translates from Arabic to ‘Festival of Sacrifice’. It’s a commemoration of Abraham’s willingness to obey God’s command to kill his son until God intervened with a ram to sacrifice instead. Not quite as fun and festive as the story behind Christmas, is it?

While both holidays embody the essence of sharing with the less fortunate and spending time with loved ones, Eid meant new clothes and a family dinner, and that was about it. There was no tree adorned with whimsical ornaments, and no gifts covered in colourful wrapping paper.

Christmas was completely foreign to me, but it was so immersed in Canada’s culture that I quickly learned everything there was to know about it. When the holidays came around, I watched Christmas classics like Home Alone and A Charlie Brown Christmas on television. I couldn’t possibly have articulated it back then, but I was keenly aware that this Christmas stuff that had my classmates and the kids on TV so giddy had nothing to do with me. It was something ‘Canadians’ and ‘Christians’ did, and I was neither.

But then my parents unexpectedly informed my younger brother, Anis, and I that Santa would be paying us a visit on Christmas Eve. “But aren’t we Muslim?” I asked.

“Yes, but Santa loves all children equally and gets them all gifts,” my mother replied.

So on that first Christmas Eve in Canada, she hung oversized red and white stockings, each one customised with our names in our favourite colours, on our bedposts. I have a distinct memory of the restless anticipation that kept me awake long after bedtime and my elation when I got up on Christmas morning to find my stocking filled to the brim. And Santa knew exactly what Anis and I liked: I got my favourite candy, Smarties. My brother got Play- mobil sets and toy sharks, his two childhood passions.

Still in our pyjamas, we ran to the kitchen to tell our parents that Santa had indeed visited us last night. We asked if they’d seen him, and Mom said, “Of course!” We didn’t have a chimney, so instead, Santa’s sleigh and flying reindeer landed on our snow- covered sixth-floor balcony. Mom offered Santa a cup of black Turkish coffee, as is the Arab custom when hosting guests. He needed the energy for the long night ahead, she told us. When I returned to school after the holidays, I had a story to share with my classmates. Santa had visited me, too! 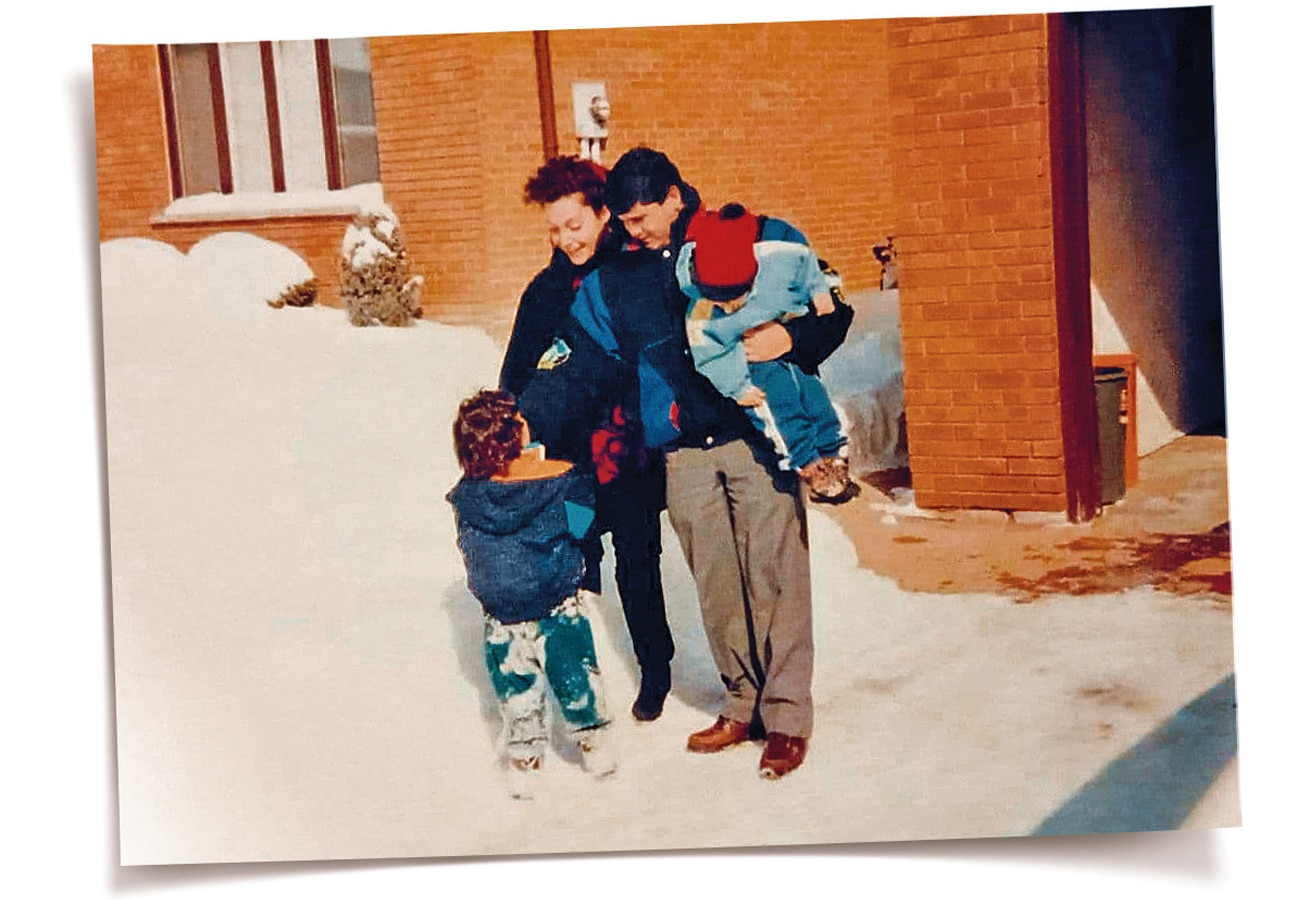 Ali (left) with his parents and brother.

My parents kept our little Christmas tradition going for years, until my brother and I were too old to believe in Santa anymore. I never asked them why they went through all that bother, but I suspect they did it so we could feel like we belonged in our new country.

Creating a sense of belonging is a funny thing. You can’t force yourself to belong somewhere. The feeling comes from a change within you, from a willingness to be part of something.

As an adult, I’ve come to realise that the most important part of belonging is joining in traditions. The specifics of Christmas, from Jesus to Santa, are all irrelevant in a sense. What matters is that Christmas gives us an excuse to bring people together to share in the love that unites us.

Perhaps, when I have children of my own one day, I’ll resurrect the family tradition and invite Santa over for a cup of coffee before he leaves my kids something special in their stockings.