Retelling The Greatest Stories Ever Told

In Eden, mythologist Devdutt Pattanaik, reinterprets Jewish, Christian and Islamic lore through an Indian lens. He tells us how he strikes a balance between the intimate and the panoramic in his writing 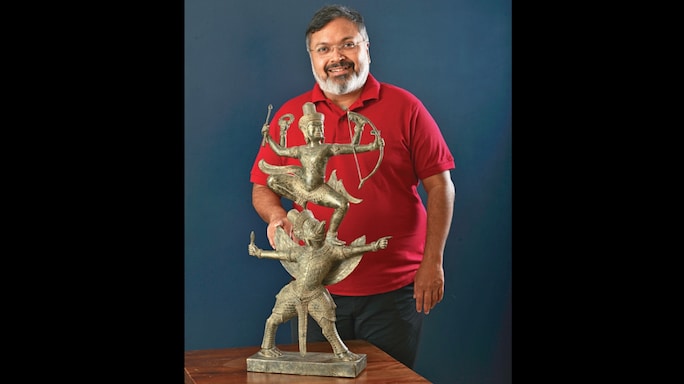 You dedicate your new book to your teachers at Our Lady of Perpetual Succour High School, Chembur. We know you acted in plays, but what was high school really like for you?

I was a nerd, a front-bencher, a first-ranker, exempted from physical training. I was highly academic, but I would participate in extracurricular activities like elocution and plays. Theatre—plays, skits—all played a very important role in our school. They give it a lot of importance. I didn’t realize the value of it then but now I see how these experiences helped me become a good public speaker.

Not everyone chooses to become a mythologist. What really spurred you to take this on?

It was all very organic. I remember I used to read Amar Chitra Katha, but one day, I discovered a book from Bharatiya Vidya Bhavan, which told me tales from the Bhagavatam. It made realize that there’s more to the scriptures than the stories I was being told by those Amar Chitra Katha comics. Soon after,whenever I would go to a bookshop,I would typically gravitate towards the section where you had books on philosophy and mythology. Over time, this became my area of interest.

I also realized most people didn’t know these stories, and so I would tell them what I had discovered. That often made me the life of the party. At the time,though, it never occurred to me that any of this would become a profession.It was only around 1996, when I was writing freelance columns for friends,that one of them said they knew a publisher who wants someone to write a book on Shiva. I wanted to try and see what I could do, and finally, that book became Shiva: An Introduction (1997).

Eden is about Abrahamiclore. The stories you tell here are different from those of Hindu myths that you otherwise do. Was the intimacy this time somehow diminished?

I’ve been familiar with these stories, but when you start actually writing them, you realize these stories are not told intimately. They are told from a distance.The intimacy you get in the Ramayana and the Mahabharata, or in a Krishna story is different. To be intimate, Ram has to be a person you talk about, and through the person, you move towards something grand. Here, you start with this idea of the all-powerful, mighty God. And you can’t really do a 360-de-gree analysis of God, right? It doesn’t allow you that. You accept it as correct,as right. That’s the whole point of a paradigm, how they function. You enter a different one and try telling the story very differently. Also, while writing, I saw that, because it’s an Indian exploration, I must be true to who I am when telling these stories.

In Eden, as in your other works, your telling of myths has been intimate and dispassionate. Has this been a hard balance to strike?

It’s the way I am. When I’m telling the story, I make it personal. Then I step away to show you the grand history and geography of these stories.A story has to touch you emotionally, otherwise, it’s not a good story. So, I move between focus and perspective. I find that’s very easy for me. Over the years, you gather so much information that you realize you have to locate them in this complex crucible of space and time. It’s not complex, it’s fun. I enjoy it.

You write that “the doctrine of rebirthenables [the] co-existence of multiple truths”. There’s comfort here, but isn’t there also room for disagreement?

Life is only about disagreement. Why should everybody agree on things? To assume that you and I will both agree on things is to assume that we’re both clones with the same database packed in our heads. That’s just not true. And that's what Hinduism and Indian thought deals with—the multiplicity of ideas. Tribal communities stick to a single idea. That’s the nature of a tribe.They try to consolidate a knowledge system that doesn’t shift very much over time. They lock themselves in and say, ‘This shall be the truth of our community. But how does one tribe then work with a neighbouring tribe? They will have to figure out a way of working with each other, while maintaining their own integrity.

In other parts of the world, we often see tribes become hostile to each other, but in India, multiple ideas have coexisted in tension, in hierarchy. Some, unfortunately, became very powerful over time and some became very powerless, but each group maintained its own integrity.

Reading Eden and also your tweets,one gets the sense that Hindu mythology has been presented as Hindu history for a long, long time now; that this isn’t necessarily a new project …

Until the 19th century, there was no difference between history and mythology anywhere in the world. If you and I were born in the 1800s, we would genuinely believe King Arthur was a historical figure. Only in the late 19th and 20th century, do terms like ‘constructed genealogies’ and ‘constructed histories’ start to get heard. It’s also only now that historians are waking upto this realization that humans prefer bards. A bard will come and say your ancestors were lovely people. A historian will come and say, ‘Well, actually,the evidence doesn’t say so’. We’ll just ask the historian to leave our house. That’s why historians are feeling cornered. They had thought that if they tell us evidence-based truths, they will get a privileged position because they'd be the new priests. But that’s not how societies function. Societies love bards.

Do stories—myths in particular—have to have morals in the end? Can’t we just delight in their narrative?

There are different kinds of stories. A parable, for instance, is designed to have a moral ending. It is prescriptive.A mythology, on the other hand, is designed to help you understand the origin of things. So, they have different purposes. Now, parents have assumed that stories are designed to brainwash their children. If I’m going to tell a young girl that good girls obey their husbands, isn’t that indoctrination? Disney goes around, repeatedly telling us there is something called ‘true love’.Though there’s no psychological and scientific evidence of such a phenomenon called ‘true love’, they keep selling it in their stories. We must understand who is the storyteller. The storyteller here isn’t interested in your children becoming wise. The storyteller is interested in whether or not you will pay money to buy merchandise.