In a culture of tough love and tougher parenting, we need to give ourselves permission to ease up. 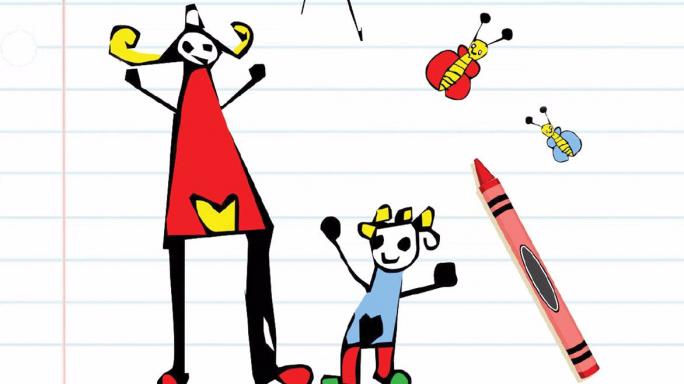 When I was a kid, I used to lie, cheat and steal. It is a useful memory to hold on to as a parent. There’s not very much my daughters can do that I have not already done, I reassure myself. Their adventure-hunting father has covered the remaining range of possibilities. There came a time when I began to find things in my daughter’s pockets—crayons or money. I chanced upon a packet of biscuits in the drawer of her study desk.

I stayed calm. It’s all right, all kids steal. “It is normal for a very young child to take something which excites his or her interest,” Google confirmed in 0.27 seconds.

Yet there was the unmistakable soundtrack of panic galloping towards me. Despite my highfalutin decisions to rewrite the family script, I had to be doing something exactly like my parents for my child to be behaving as I did at her age. I walked into the park nearby to breathe out a silent scream.

A while ago, I read Amy Chua’s Battle Hymn of the Tiger Mother, where she explained how Chinese parents produced successful kids. Her bluntness and clarity was a hook, but I was also amused by the self-parody and wry humour. I shared the article online. That is when I began to realize the enormity of what this piece was doing to its readers. It was dredging up anger, fear, self-doubt, judgement and passionate counter-arguments.

Describing how she pushed her seven-year-old Lulu to master a piano piece, Chua wrote:

I threatened her with no lunch, no dinner, no Christmas or Hanukkah presents, no birthday parties for two, three, four years. When she still kept playing it wrong, I told her she was purposely working herself into a frenzy because she was secretly afraid she could not do it. I told her to stop being lazy, cowardly, self-indulgent and pathetic.

Chua clarified in interviews that her book was the story of her own eventual transformation as a mother. “Mine is a cautionary tale and I am the mad woman in it,” she has said.

At first glance, it may appear that the parent in the trenches with her kid is doing all the hard work, and the lenient ones are lazy. It may seem that the ‘tiger mother’s’ kids are soaring, while others are still playing in the mud, their potential unrealized. The truth is that it is easy to be the ‘tiger’. You are the boss, you set the rules, you roar. The little ones get in line. It is the ‘mother’ part that demands courage, as Chua discovered. Parents make mistakes, they are vulnerable. They learn to back off and cede territory.

Parents need permission to fail without feeling like failures. This parenting business is a complex web. We source the design from deep subconscious wells, from our memory and experience. We repeat patterns from our own childhood. We are the agents of our culture. If Chua decided that her daughters would play instruments and excel academically, this was a function of her background—she was the child of immigrants, in single-minded pursuit of praise, excellence and admiration in America. She had no clue about the value of fun and games.

When Chua asked her 15-year-old to suggest a title for her book, the girl said, The Perfect Child and the Flesh-eating Devil. Sometimes, it is not so complex after all. Ask a question and you might get a very revealing answer.

Most Indians will recognize the type of tiger mom Chua is. The word love was never used in Chua’s childhood home. That sounds familiar, too.

My brothers and I were high-achieving children of strict parents. When I was 12, I pasted an article in my diary, titled, ‘The greatest gift you can give your child: self-esteem’. I don’t think I knew what self-esteem was, but I must have wanted it badly, because we were not allowed to cut out pages from Reader’s Digest.

I now know that self-confidence is not something anyone can give you to keep forever. It is like a lake in the mountains, a valley of flowers—it must be discovered again and again.

With three children, I get several opportunities to trip and fall. One evening, at my parents’ home, when our kids were being kids, I suddenly yelled at them to calm down. The children were stunned. My father was watching. He will be proud of me, I thought. I’m showing him how well I have learnt to be a strict parent.

Mum called the next day. “Your father was saying, ‘Tell Natasha not to be so harsh, these hurts are not easy to heal. Why repeat our mistakes?”’

The voice of Gabbar Singh whispered in my ear, Socha tha sardaar khush hoga? Shabaashi dega? (You thought the boss would be pleased, did you? That he will congratulate you?)

I believed my father was the original tiger parent. And here he was telling me not to be like him. He spoke through Mum, yet something inside me healed. My father was giving me permission to be the change.

Excerpted from My Daughters’ Mum: A book of permissions to love, laugh, heal and find one's way home by Natasha Badhwar, relaunched by Simon & Schuster India in November 2018.

Do You Like This Story?
12
2
Other Stories
Please enter valid text
Must Reads
Latest Issue