The Jam Maker of Bhuira

With her delectable home-style preserves, she's brought prosperity to this remote Himachal hamlet 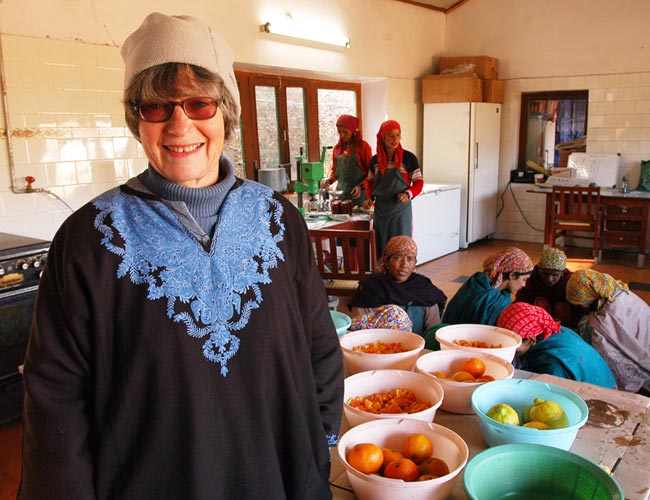 In 1991 Linnet Mushran visited a relative's charming rose-covered cottage in the Himachal hills. Getting there meant a backbreaking drive over unpaved roads to a secluded village named Bhuira. Nestled among orchards and deodar woods and tumbling with flowers, it immediately struck a chord in Linnet, who loved mountains and everything that grows.

Linnet and her husband Viney soon bought that house with an acre of orchard. "Just to keep it in the family," they said. Peaches, apricots, plums and kiwis flourished in and around Bhuira, along with Himachal's ubiquitous apples. What concerned her was how so much of all that precious produce just went waste.

Linnet had always baked and made preserves, growing up as she did with the excellent seasonal produce of Somerset in England. "That was my only qualification," she chuckles, "I knew how jam should taste." She began gathering the windfalls to make apple jelly. That became a windfall in more ways than one. Today, Linnet not only produces what many consider India's best jams and fruit preserves, she's single-handedly brought employment and prosperity to the farmers and the women of Bhuira village.

Her story reads like a romance novel. English girl Linnet Allfrey met Kashmiri boy Viney Mushran at college in Scotland, and fell for each other. Coming to India and setting up house, she flung herself heart and soul into being an Indian wife. She wore sarees, became fluent in Hindi and enjoyed making Kashmiri Pandit food. "She even tried to tan herself to fit in," laughs Rebecca Vaz, her daughter-in-law. Although Viney's mother had been apprehensive about her only son bringing home an English bride, she quickly forgot Linnet was a foreigner at all.

Linnet's niece Madhavi Bhatia, who runs a B&B in Shimla, and unfailingly serves a selection of Bhuira marmalades and jams for breakfast, drove me down to meet her aunt last summer. Linnet welcomes us warmly. Her garden is a tangle of scent and colour and there is a shady trellis of kiwi fruit vines under which we take tea.

"We never could find proper jams in India," confides Linnet, now 73. "There was this sugary red stuff that went by the name of mixed fruit jam. So I started making jam with whatever I could lay hands on-mulberries and other fruits from our garden in rural Bihar, where Viney was employed. The original mixed fruit jam was made by farmers' wives in England at the height of the haymaking season when they had no time to make separate jams. So they bunged them all in one pot-red raspberries, blackcurrants, English gooseberries, delicious fruits that don't grow here. So one jam that Bhuira will never make is mixed fruit jam."

Later, in Bhuira, the little makeshift jars fashioned from drinking glasses filled with her own jam, that she started sending around to family and friends, became so popular that it got her thinking of expanding. "And the village women's need for cash-at that time they had none," Linnet recalls. Step by step her dream took shape. "There was much negotiating with the authorities," Linnet says. She still has nightmares about the delays and the wrangling with official red tape. "The government set too many restrictions and didn't realize how our jams would generate employment and help the local economy." But she finally got her fruit products order (FPO) licence. A manufacturing unit in stone and slate was constructed close to the cottage and Linnet went into production in 1999. Initially, nobody took her seriously. "Even my accountant called it 'time-pass'," laughs Linnet.

In and around Bhuira, much of the fruit harvest had earned local farmers next to nothing because they didn't have the means to box and transport such quantities even to the nearest markets, Solan and Chandigarh. Now even farmers with a few trees could just walk to the factory with their crop. On board came the women of Bhuira village. Linnet taught them the ways of jam-making as it had been passed down from her mother. The legend on the label of a Bhuira jam jar now reads "Created by happy mountain women."

Back in 1999, the first person to help Linnet market her jam was her friend and role model Fori Nehru, the Hungarian-born wife of diplomat B.K. Nehru. Fori persuaded Gupta Stores in Kasauli to stock a few jars of Linnet's apricot jam. It sold out quickly and the store was soon waiting for more.

The smiling girl brigade at the factory glow with a pride that's almost palpable. "They're hard-working and love the idea that the brand bears the name of their village," says Linnet. "Their income supplements the little they get from their farms and fields. They now also have their own self-help group to invest their precious earnings so that their men wouldn't drink it all away."

More than a hundred women support the operation and most of them come in only seasonally when the fruit is picked (only 19 are regular employees). And every farmer in the area is a supplier. The factory has become a lifeline for so many women, most of who have not studied beyond class five. I meet the two ladies who have become the pillars of the business. Tiny, twinkling Ramkali has been Linnet's right-hand person from the start. She manages the staff and all those who make the process happen-from farmers and truckers to the buyers-with a velvet glove. "She's also our HR wizard," reveals Rebecca. The much younger Sarita Devi manages the workings of the factory "with a mind like a human computer." I am told she can remember facts and figures from any year. Linnet sent her on a food technician's course, and she soaked it all up eagerly. Bhuira workers like these are also justifiably proud that their 26 products-which include jellies, marmalades and chutneys besides jam-have put their village on the map. "We also have the respect of our menfolk and can send our children to school and college," says Tara, another Bhuira Jams employee.

Linnet takes me on a tour of the factory. I am given a shower cap before I enter and all the workers are neatly turned out with their hair tucked away into caps as well. The place is spotlessly clean. Now they have viewing windows through which visitors can watch the process without interrupting or compromising on hygiene.

The all-woman operation is very labour intensive since everything-sorting, chopping and cooking-is done manually, which is what makes these jams unique. Busy women, who sit on the floor, as they are used to in their own kitchens, do all the preparation. The handcrafted jams, made in stainless-steel vessels, are truly of artisanal quality. While the apples, pears and stone fruit are local, oranges, grapes and lemons are sourced from Nashik, and strawberries from Haryana. And the galgal, a fat knobbly lemon which grows locally, adds a special tang to their three-fruit marmalade.

In summer the Bhuira ladies are given a few days to go roam the hillsides picking the ephemeral hisalu, wild yellow raspberries, which make a special limited edition of jam. "It's a fun-filled outing, like a picnic," says Rebecca. "Our jams are 50 percent whole fruit and no preservatives are used, which is how home-made jams should be," explains Linnet. "Nothing but lemon juice, apple juice and sugar, to set the preserves in the traditional manner."

Bhuira's apple jelly has remained a steady favourite, sometimes with a hint of cinnamon, mint or ginger,but a surprise bestseller is their Bengali tomato chutney. There is a delightful sequence in a yet-to-be-aired documentary Out of a Jam by filmmaker Shalini Harshwal, where in a flurry of girlish giggles, Linnet and her Bhuira ladies name their personal favourites. Linnet prefers apricot, while the others, one by one, chime excitedly in English: "Cape gooseberry… guava jelly… black cherry… grapes..." in their melodious local accent. The documentary has been shown and appreciated at film festivals abroad, even picking up an award in Indonesia.

Today, Linnet's enterprise has a cold storage with a capacity for 10 tonnes of produce and a second riverside plant has been taken on lease in the village of Halonipul below the valley, which would boost Linnet's annual production from their current capacity of 70 tonnes to a hundred.

Linnet has recently been passing on the reins and responsibility more and more to the next generation. Daughter-in-law Rebecca, who is also a gifted home baker, is becoming the new face of Bhuira. With the help of Karun Sanghi, who is married to Linnet's daughter, Rebecca has taken charge of costing, accounts, marketing, permits and all such complicated business and production matters.While the jams are sold by Fabindia with the retail chain's own label, Bhuira jam is becoming a brand name in its own right. "I was never a businesswoman," says Linnet. "It was the adventure and fun of it and the thought of helping these women stay self-sufficient that's kept me going."

Do You Like This Story?
201
3
Other Stories
Please enter valid text
corona updates
Must Reads
Latest Issue