The Good Fight With Lipstick On

How this former radio jockey stood up to every challenge that came her way, with a smile 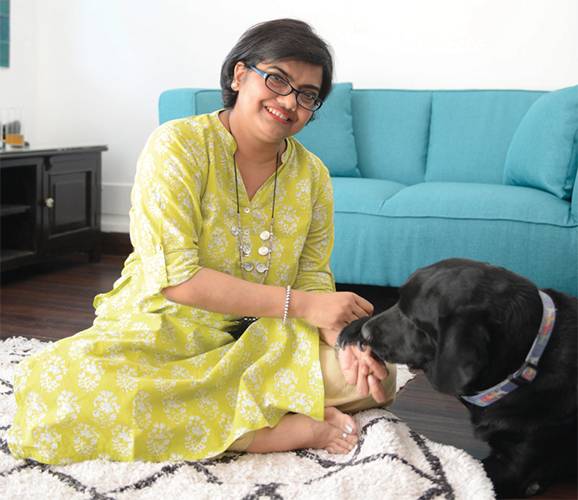 While cuddling my month-old baby and showering him with sweet nothings, one evening, I heard a slur -- it was mine. It freaked me out a bit. The next morning, while brushing my teeth, froth filled my mouth but I simply couldn't spit it out. The slur came back again. What was going on? Why was I not able to breathe normally?

This was September 2005. I had the career of my dreams as a radio jockey (RJ) at Radio Mirchi. Name, fame, a decent salary, a house of our own in Delhi -- I suppose I had it all. Then there was my precious cocoon of love -- my fabulous partner and our baby boy, the joy of our lives. As life stories go, mine was almost picture perfect. Until now.

My gynaecologist immediately referred me to a top neurologist at Delhi's Apollo Hospital. It took him barely 20 minutes to leave me with a verdict: I had myasthenia gravis (MG). Some call it the snowflake disease: Just like snowflakes, the symptoms of no two patients with this condition are alike. An autoimmune disorder that is fairly rare, it seems even doctors are left scratching their heads while offering advice.

The symptoms can be strange and sudden. Muscles can become weak -- in my case facial muscles were affected. Sometimes the eyelids shut involuntarily. A sudden stutter or lisp is not uncommon. It can be a social embarrassment when a smile droops without notice. Chewing or swallowing can be hard. A patient may end up twitching and turning their head to prevent food from escaping through the nose. While it may not always be this bad, there's no telling what's next, like the times when you simply cannot breathe.

I was put on heavy-duty steroids, and when they did not help, my doctors investigated further and discovered I had thymoma, a tumour arising from the thymus tissue, that was causing MG. While doing the thymectomy, they found that the tumour had spread to the chest. They removed the affected parts and the surgery was followed by several rounds of chemotherapies and radiation treatments.

However, an unexpected turn of events during the surgery left me shattered. One of my vocal chords was rendered paralyzed. This meant I could not speak normally. There I was, the famous RJ, always in charge, facing the greatest challenge of my life.

Radio was my first love. Inspired by my sports journalist dad who was a commentator, I had dreamt about a career in radio since middle school. Suddenly, I had been served a sentence, one that would never allow me to use my voice again, not on radio, nor to call out to my loved ones. I could not even shower baby talk on my infant or hold him in my arms.

At that moment of numbness, I was transported back to a lonely studio in November 2004. I had just wrapped up Bumper to Bumper, my four-hour drive-time show. After signing off and leaving my audience with the last track of the evening, I looked around at the red-green-yellow walls of the studio. I felt faint with exhaustion.

Like all high-pressure creative jobs, my work had been an exhilarating roller-coaster ride. I had been at it for two years as a full-time RJ. After years of freelancing as a jock, emcee, radio and TV announcer and newsreader, the journey had been extremely rewarding. Starting out as an English newsreader with All India Radio, within a year I had established myself as a professional voice-over artist and bagged the best radio and TV commercials. A decade had passed, with me putting everything into my radio and TV career -- sometimes working non-stop without food or sleep. My work ethic did not allow me to say no to an assignment. In fact, I had so much fun at the job that the thought of slowing down or taking a break did not cross my mind.

But now, the load of weekly numbers -- audience stats and targets -- along with a daily show, where I would not settle for anything but the best, was beginning to weigh me down. I enjoyed the adulation and mini-celebrity status, but truth be told, my mind and body pined for a break.

Alone in the studio that night, tired and frazzled, I was on the verge of tears. I wished I could take a break. Just a short one where I could relax, rejuvenate and return to work soon. I had no idea that I wasn't alone in the studio that night. Someone else, who had it in their power to change things, was also there and said, "Tathaastu, so be it."

As I struggled with the diagnosis and the paralysis, an insensitive doctor asked me to forget about going back on-air. I simply could not bear being left with this fait accompli and decided to challenge it. Yoga, pranayama, walking, nutritious food, positive thinking, past-life regression, self-help books -- I tried everything. My family -- mother, brother and my in-laws -- jumped in to help and slowly got me back on my feet.

In November 2007, I was back on-air. I was super excited, this was where I belonged. But after two months of returning home exhausted and barely being able to speak to my son, I realized I had to make a choice. I went off-air and became a producer for the breakfast show. Through all this my greatest champion was my husband, Rahul Narvekar. I had met this serial entrepreneur, screenplay writer and hardcore Mumbaikar online in 2000. We got married a year later and he moved to Delhi to be with me.

Rahul was always there, always cheering me on, especially as I completed the seven-kilometre Great Delhi Run and the 21-kilometre Airtel Delhi Half Marathon over the next two years. It was a big achievement, considering I was never a runner, but took to it inspired by Rahul. I started to turn things around, and went into complete remission. I couldn't have done this without Rahul, the eternal optimist.

Then, four years later in 2011, one night as I lay in bed telling my child a story, the slur returned. In the darkness of the bedroom, I felt a chill run down my spine. The PET Scan indicated that the thymoma had spread to the area behind my left lung.

I could make no sense of it. Why was it happening again? I was careless before but had now taken charge of my body and mind. I was at my fittest, thanks to my yoga guru, my nutritionist and fitness instructor. What followed next was bewildering. The doctors removed five new tumours, along with chemotherapy and radiation sessions yet again. A bad bout of pneumonia came next and my immunity dropped even further. I went into remission once again, but it did not last long. I wasn't able to step away from this cycle.

The year 2015 was the worst. I lost 10 kilos in less than four months. The symptoms came back. I slurred, my left eye drooped and breathing was a task. I could not pick up a pen, wear clothes on my own, smile, chew or swallow food and drink water without it coming out of my nostrils. I had multiple falls and had to have stitches on my knees at the age of 43. I learnt I was in the midst of 'myasthenia crisis'. My muscles were too weak to function, and my neck kept falling.

I was in the ICU for a fortnight, perhaps longer. When I gained strength, I looked around. And all I could see was love. Each bed had its own story. I wrote down everything I observed on my phone, the one I was allowed to keep so I could listen to music in the ICU.

In October 2016, I was back in the ICU with a type-2 lung failure. Ironically, I was on the same bed where I had written the first of my love stories. Rahul was there by my side, with a little surprise. He had compiled all the stories into a small book, ICU Love Stories, and we launched it on my birthday, as I lay there with my oxygen mask on, with our son doing the honours. Despite everything, it was a good day.

With immunity as low as mine, I need to constantly work on myself to stay in the game. Steroids have taken their toll, and I now have cataract as a result. I take each day as it comes. On the good days, I get up and go in to work at Radio Mirchi, where I am the group head, CSR [corporate social responsibility]. But I don't let the bad days get me down. I drag myself out of bed, shower, get ready, put on my lipstick (to feel happy) and just work from home. It helps that my colleagues have been very supportive through all this.

It took me a while to back off and not battle everything non-stop. The day I accepted that I was dependent on others for even the most basic things in life -- putting on clothes, washing my hair or even switching on the fan -- I could move on.

I realized that it was important to respect my body, to nurture it and exercise. At the beginning of my career, I had pushed myself too hard. Juggling my job as a geography and dramatics teacher with my passion for radio. I survived on school canteen samosas and patties, innumerable cups of tea, fan  biscuits and late-night chow mein at TV studios. I had achieved a lot, but lost a lot as well -- poor nutrition, irregular sleep and stress had taken their toll.

So now, I de-stress and don't care what people think. I swing in the park, if I must, even at 46. I look forward to life. But, above all, I count my blessings.