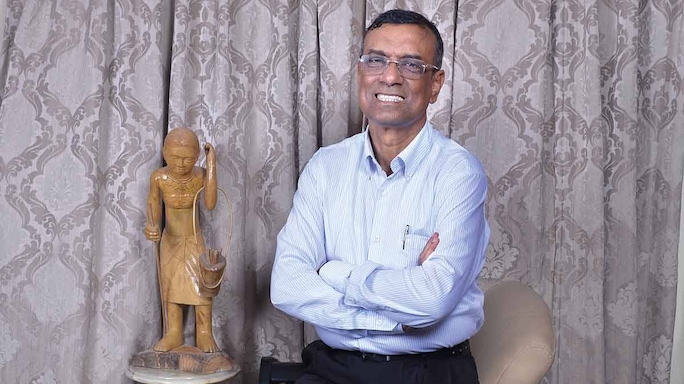 Chandra Shekhar Ghosh, 59, was first confronted with dehumanizing hunger as a young NGO worker. He was often dispatched to the remote districts of Rangpur in Bangladesh, where he found villagers who slept for three days in a row without any meals. Distressed, he had handed over a 50-taka note to help. Riding back on his bicycle, he was haunted by the predicament of these folk, trapped in a cycle of poverty.

“I figured donations don’t help; income generation was the only way to pull people out of poverty,” Ghosh tells us, sitting in the plush headquarters of Bandhan Bank in Kolkata. Chandra Shekhar Ghosh, today, is the managing director and CEO of the organization (whose business runs to Rs 1,20,364 crore), which is a champion of financial inclusion with its microfinance arm, which aims to change millions of lives through income generation.

Born to a humble Bengali family of Tripura, Ghosh helped his father run a small sweet shop in his boyhood. By the time he graduated, his father had passed away, leaving him—the eldest of six siblings—to run the family. A few years later, during a door-to-door health campaign in West Bengal’s Purulia district, Ghosh visited a young mother. She was boiling rice in a makeshift oven in front of her shack. “Her infant daughter, who played next to her, was picking up mud and putting it in her mouth,” recalls Ghosh. He tried to explain to her that ingesting dirt would make her baby sick, but the woman looked distracted. When he asked her if she had registered anything, she responded: “For three days, my child has been crying for some fish and rice, and I have been promising it to her. I only have rice at home, and don’t know how to make her eat it without the fish. Can you tell me how?”

Gutted by the devastating penury he saw wherever work took him, Ghosh was determined to act. He thought about avenues of income generation, particularly for women, the primary caregivers of children. But women were also challenged by patriarchy, which compromised their ability to access livelihoods. “This is a cycle that needed to be broken,” says Ghosh. Around this time, an interesting phenomenon caught his attention. In Kolkata’s markets, Ghosh noticed local moneylenders on motorbikes, who lent vendors Rs 500 each and took away Rs 5 as interest. “I wondered why the borrowers were willing to pay more than 700 per cent interest a year?” says Ghosh. The vegetable sellers, particularly the women, said it was a godsend for them. Their loans were delivered to them, without delays or paperwork. What if I took a bank loan and instead of Rs 5, charged Re 1? Ghosh thought. This way the vendor would make Rs 4, their income would go up and they can scale their business. This idea obsessed him, until one day he returned home and announced to his wife Nilima that he would quit his job, to start a microfinance NGO. “I started weeping when I heard this,” says Nilima Ghosh. Her brother also tried very hard to persuade Ghosh to not give up the security of a monthly salary—then Rs 5,000—for an absurd dream. “Even though everyone believed I was making a mistake, I was convinced I’d be successful,” says Ghosh. Running the family became difficult, yet Ghosh went ahead. He soon discovered that raising loans for the poor was quite impossible. “But I spotted the potential, so I remained steadfast in my belief,” he says. After approaching banks and financial institutions, he failed to make the loan criteria. Investing an initial sum of Rs 2 lakh, raised from friends and family, Ghosh started his microfinance NGO, Bandhan–Konnagar, “just to prove to the banks that the model was sound.”

The turning point came after 18 months, in September 2002, when SIDBI (Small Industries Development Bank of India) approved Rs 20 lakh as loan. “Without scaling up, we would not be able to make an impact,” says Ghosh. To access big funding, all microfinance work had to be transferred from the NGO to an NBFC (Non-Banking Financial Company). Attracting talent was Ghosh’s next big challenge. He set up some extraordinary criteria after struggling initially—candidates who had passed higher secondary exams in the third division, and were around 23 years old, were asked to apply. “I wanted people with hunger, who knew exactly how tough the market was. These are the people 22 february 2020 who have built the bank. They are the backbone of Bandhan today,” says a very proud Ghosh.

Today, Bandhan Bank has 4,288 banking outlets, serving more than 1.9 crore customers. Yet, the microfinance arm is closest to Ghosh’s heart. Bandhan has created millions of entrepreneurs, who have built their businesses bottom-up and earn up to Rs 50,000 a month. “Recently in Mumbai, a young man came up to me and thanked me, mentioning his mother, who had taken a loan from us, started a small business and was able to put him through a good education. I cannot tell you how it felt,” says Ghosh. Some Bandhan borrowers generate employment themselves. “We have one crore borrowers, all over India today. Even if one job has been created by each, it would mean we have been involved in creating jobs for at least one crore people,” adds Ghosh. For him, what works is the trickle-up method of increasing the incomes of large numbers, and thus creating wealth.

Ghosh does not believe in alms. “Give work instead, to the destitute,” he says. Bandhan also works in community development and has been making entrepreneurs of poor people for the past 15 years—1,01,530 people in 12 states so far. Of the funds allocated for development, 40 per cent goes into this programme. A woman who used to beg in Murshidabad has built a four-storey building today, the Abdul Latif Jameel Poverty Action Lab in MIT has informed Bandhan. “She has done it by making and selling puffed rice, through our programme,” says Ghosh. She met Ghosh recently and offered him some of her puffed rice, which touched him deeply. “If someone says our work has changed their lives, it inspires me to do more,” says Ghosh.

Ghosh’s larger vision is to drive India’s human development index, in a meaningful, sustainable way. For this, he draws his motivation from his team. “Together we can move mountains,” he says. Considering what they have achieved already, Ghosh and his team will be the ones to watch.

Do You Like This Story?
75
4
Other Stories
Please enter valid text
Must Reads
Latest Issue