Fatherhood often brings you upfront with your own foolishness, fallibility and frailty.

When my daughter Ankita was a few months old, my wife Madhavi decided that since I was of no use in the feeding and bum-washing departments I should at least help in putting her to bed.

Now Ankita was a night creature from day one. While she slept like a twig—obviously for anyone as cute and dainty and delicate as my daughter, ‘log’ can hardly be used as a simile!—during the day, she was in the mood to ‘party’ at night.

Soon I was assigned the job of keeping the little one engaged for a couple of hours while the big one got her 80 winks.

Unfortunately, Ankita didn’t like my mug one bit. The minute I picked her up she would bawl her head off. And it was really amazing that one who was barely as heavy as my left wrist could stir up such a racket. But stir up she did, and Madhavi would wake up and give me the mother of all dirty looks—if looks could kill, I would have had as many obituaries as Cristiano Ronaldo has goals in his kitty!

As the nights passed, I tried everything to win Ankita’s confidence: doing calisthenics, making faces, creating sounds and even yodelling. The results were the same. She would just howl and continue doing so until Mother Madhavi would come and rescue her from the clutches of Attila the Papa.

A few months went by and my next assignment was administering Ankita mini-feeds. I remember clearly the first time I had to do it. I sat on the floor of the living room with Ankita sitting in front of me. I gave her a big spoon and a small plate so that she could beat them together and create the ‘euphony’ she always delighted in achieving. Then I took one spoon of the gooey mix that fate and Madhavi had ordained should be her diet. I fed her making all the right noises and faces that I had seen Mother Madhavi unleash. Ankita swallowed a mouthful and a strange gleam lit up her eyes. I was thrilled. I had at last succeeded in crossing a significant milestone in my career as a responsive and responsible father.

The next moment she made a gurgling sound and spat the entire mouthful of the viscous stuff on my face. I was too stunned to react, but Ankita wasn’t. I don’t know how much she understood the pitiable predicament of a poor Papa but she burst into peals of laughter. I cursed silently and went back to round two. Caesar might have backed off, Napoleon would have given up—but how could a die-hard Papa capitulate?

This time Ankita was more benevolent. She took three spoonfuls and just as a look of triumph started suffusing my face, it happened again. Splat! She had deposited three times the goop on my face and was grinning and beating her gong with even greater abandon. 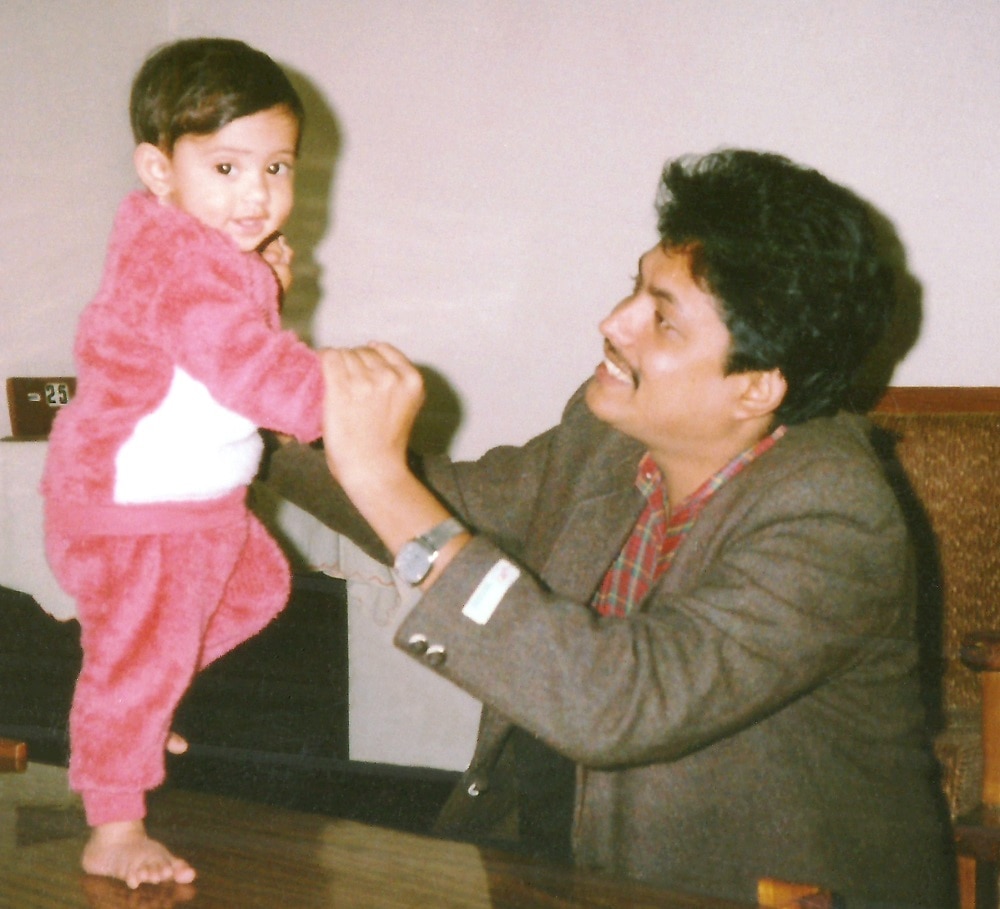 Ankita screamed like she had never screamed before; my mother-in-law, who had chosen this rather delicate moment to pay us a surprise visit, hollered, and Madhavi came charging from the kitchen like a bull after an unfortunate matador.

I sat with my head bowed, a picture of remorse.

My mother-in-law declared, under her breath of course, “This is what happens when you marry outside the caste.” Madhavi had the ‘trust you to mess up even the simplest of tasks’ look on her face and my angel Ankita kept glaring at me as if I, not she, had bathed me in muck!

My first chance at redeeming myself in the eyes of my dear family came a full two years later.

“You write satire and poetry, don’t you? Then why can’t you tell Ankita stories and put her to bed?” Madhavi told me one day. To her, shifting from satire/poetry to children’s fiction was as simple as moving from the realm of the boiled egg to the planet of the poached egg.

Anyway, I took her rather broad hint seriously and started thinking up little tales to tell my precious one. I don’t know whether she liked the plot more or my antics, but she lapped up my stories and my confidence grew. Soon it became a tradition which continued even after my son, Aniket, grew up and doubled the size of my audience. The stories liked by my kids found their way to the laptop—and from there to the publisher’s desk.

Our daily tryst with tales created indelible memories. Sitting on the bed, on long summer nights, cold winter evenings and rain-drenched twilights, we used to laugh, jump, sing, dance and sometimes shed a tear or two as we explored the worlds of magic and mystery, action and adventure, sentiment and values. The tales created a gossamer fabric of trust and togetherness which, I am sure, we will always cherish.

Even today, when the kids have entered the terrible twenties, I look back upon those precious vignettes of sharing and caring, and my eyes grow misty.

Yes, if Papahood often confronts you with your own frailties, it also gives you moments of pristine joy, pride and esteem. If Papahood defined me as gauche and uncouth, it also gave me the prized title of ‘Papa Scheherazade’!

Ramendra Kumar is an award-winning children’s writer with 35 books to his name. His writings have been translated into 28 languages—both Indian and foreign. His best known works include The Siege of Cricket, Against All Odds, A Tsunami Called Naani and Paplu the Giant.

Do You Like This Story?
24
0
Other Stories
Please enter valid text
corona updates
Must Reads
Latest Issue