Last year, when I was in the 11th grade, my friend, Rameesa, and I were chosen to make a presentation at a school fair. The day before the event, we were asked to make some changes, which took a few extra after-school hours to complete. With home at least 30 kilometres away by bus, I called my parents from a teacher's phone to let them know I’d be later than usual. Then, I boarded a direct bus to my neighbourhood and settled in for the long ride back.

At some point, I dozed off and by the time I awoke and looked around,

I found myself in an unfamiliar area. It was 7:00 p.m and getting dark. I had missed my stop by a long shot and rushed out at the next one in a panic, unsure of what to do next.

The place where I landed was desolate except for a few workers milling around. There was a slum not far away but no shops from where I could call home. As I tried to figure out a way out of my predicament, I suddenly got the feeling that I was being watched. I looked around and saw a woman holding a child in her arms looking at me. Her appearance—short, thin and dishevelled, her sari muddy and ragged—did nothing to reassure me. I convinced myself, through wild assumptions, that anyone who looked as she did could only pose a danger to me. My mind willed my body to run, but I couldn’t move.

The woman walked over and asked me questions in a dialect I couldn’t understand. Then, she held out her hand—in it was an old, damaged mobile phone, held together with a rubber band, but functional.

It dawned on me that this was my chance. Still wary, I grabbed the phone with shaking hands and called my father to come pick me up. With nothing else to do but wait, I stood as still as possible, neither speaking nor making eye contact with the woman, who continued to hover right next to me until he arrived 20 minutes later. Once sure I was safe, she smiled and walked away, refusing the money my father tried to offer. I learnt that day to never again judge a person by their appearance but by the kindness they show to others. 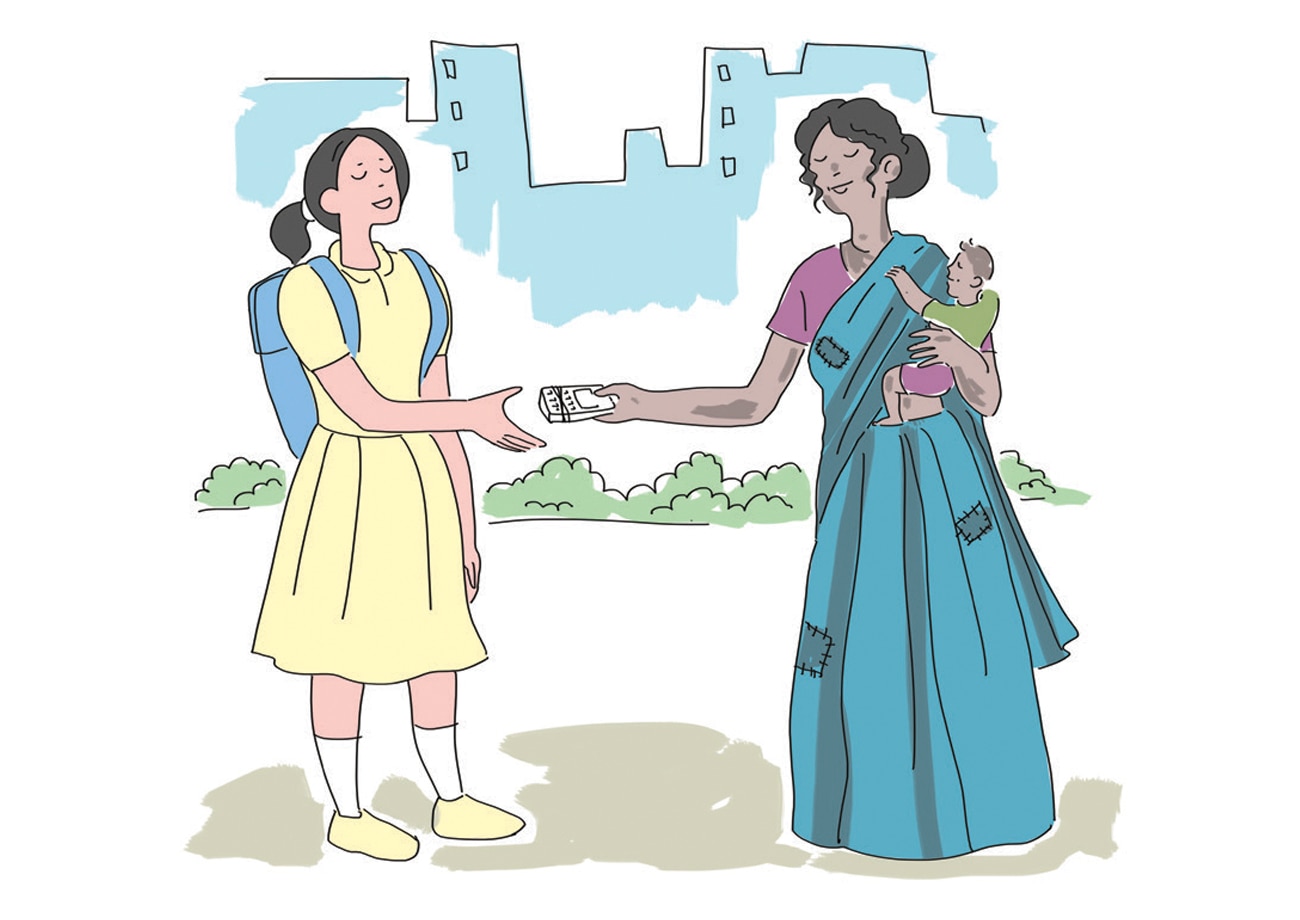 John Ruskin once said, “A little thought and a little kindness are often worth more than a great deal of money.” This quote quite aptly sums up a beautiful moment I witnessed recently. I was on my way home after a busy day, and because my phone had died, I happened to be people-watching instead of scrolling through my feed while waiting at the bus stop near the Thane railway station.

An old man selling unbranded soaps was sitting on the crowded pavement across the road with his wares spread out on a blue tarp. He looked poor and frail and I was moved by his condition—perhaps he was the only one supporting his family? But I soon shook off the sadness—There’s nothing I can really do for him. It’s up to the authorities to ensure that such senior citizens do not have to work like this, I thought.

A few passers-by bought soaps from him while others only made idle conversation. Just then, a lady walked up to the vendor and bought every bar of soap he was carrying. She paid him the full amount and walked away. Delighted that he had sold all his goods, the vendor’s eyes sparkled and he smiled ear to ear. He walked to the nearby ration shop, bought food for the day and left, as happy as a clam.

The woman, on the other hand, crossed the road, placed the bag full of soap on the street and then joined the queue to board the bus, which had just pulled up. The curious incident baffled me.

The woman happened to get on the same bus as I did and took the seat next to mine. I couldn’t help but ask her about the strange act.

She looked at me and nodded.

“Why did you leave all the soap bars near the bus stop?”

“Oh, I walk this road every day and noticed this man many times. I felt bad at his plight and offered him some money but he refused. He said he couldn’t accept money for nothing in return. He wanted to earn it through hard work and not pity. So I bought all his soap bars to help him in a way that preserves his dignity. I left them on the road so he can sell them again, but I know he wouldn't do that. He’s a very honest man. He was happy and content with whatever he earned for the day.” I reached home feeling a lightness and hope that humanity is not lost after all.

You can find more such examples of exemplary kindness here.

Do You Like This Story?
11
1
Other Stories
Please enter valid text
Must Reads
Latest Issue