It was exactly five years ago that Alagarathnam Natarajan, 70, while walking on a South Delhi street, came across a large bungalow with a water cooler in front of it. Working-class people, exhausted by the searing summer sun, lined up in front of it to quench their thirst. There was something about the scene that pulled at his heartstrings and gave birth to an idea. “At that moment, I decided that I will install a cooler in front of my house too,” says Natarajan.

A cancer survivor, he had previously worked with a Stanford University engineer to help cycle-rickshaw pullers in Varanasi make their vehicles more efficient. He had volunteered at a Delhi school for homeless children and a hospice that took care of advanced and terminally-ill cancer patients. He even conducted the last rites of scores of poor people who died at the cancer hospice and unclaimed bodies on the roadside. He had converted his utility vehicle into an ambulance-cum-hearse for this.

The water-cooler idea came at a time when Natarajan was a bit disillusioned by the people he worked for. “Many of them did it for the recognition and not for service. Real charity is when you put your hand in your own pocket and do it selflessly,” he says.

But opposition to his water cooler idea came from an unexpected quarter. “It started right here,” Natarajan says, standing in front of the cooler and pointing to his own two-storey sprawling house in Delhi’s Panchsheel Park. “My wife, Seeta, said I could do whatever I wanted, but not in front of the house that her parents built.”

Both stood their ground. “Eventually, our relatives intervened. But in the end I had my way,” he grins. Once his wife relented, he got a water cooler that cost him about ₹20,000 and installed it in front of the house. But now it was the neighbours’ turn to object. “They felt it would encourage hooligans, rag-pickers and thieves. ‘How can people whom you serve water to, rob you?’ I asked. Not a single incident has taken place in all these years,” he points out.

The cooler was a success, but he wanted to do more. However, installing more coolers proved to be an expensive and challenging affair. A friend offered a simpler solution—earthenware pots, or matkas, which are cost-effective, keep water cool and require very little upkeep. He quickly bought three large matkas and placed them on Outer Ring Road, next to Panchsheel Park. They were instant hits. Five years on, he has matkas in groups of three, placed in almost 20 locations in South Delhi.

An engineering-college dropout, Natarajan hasn’t forgotten what he picked up in his brief stint at Bengaluru’s Ramaiah Institute of Technology. Today, he single-handedly fabricates the stands and has also installed air pumps for the use of bicycle and cycle-rickshaw owners at every matka stand. “It was in Denmark that I saw cycle mechanics leaving air pumps outside their shops for people to use for free. That, I felt, was a great gesture,” he says.

He has even converted his ambulance into a mini fire engine with all kinds of decorative paraphernalia welded on the outside. Inside, there is an engine to pump water, two water tanks, a pulley hose reel, a welding machine and other essential equipment.

Formerly a London-based souvenir seller, Natarajan survived a grim cancer diagnosis. After an operation in 2005, he decided to return to India after three decades. Today, he mostly funds his charities from his savings.

The septuagenarian starts his day at four in the morning when he heads to a nearby school that has given him permission to draw underground water. He then drives around in his van, filling up all the pots. There are signboards on the stands with his contact details so he can be alerted whenever the pots run dry. Natarajan is very particular about the quality of the water in the matkas and ensures they are cleaned regularly. 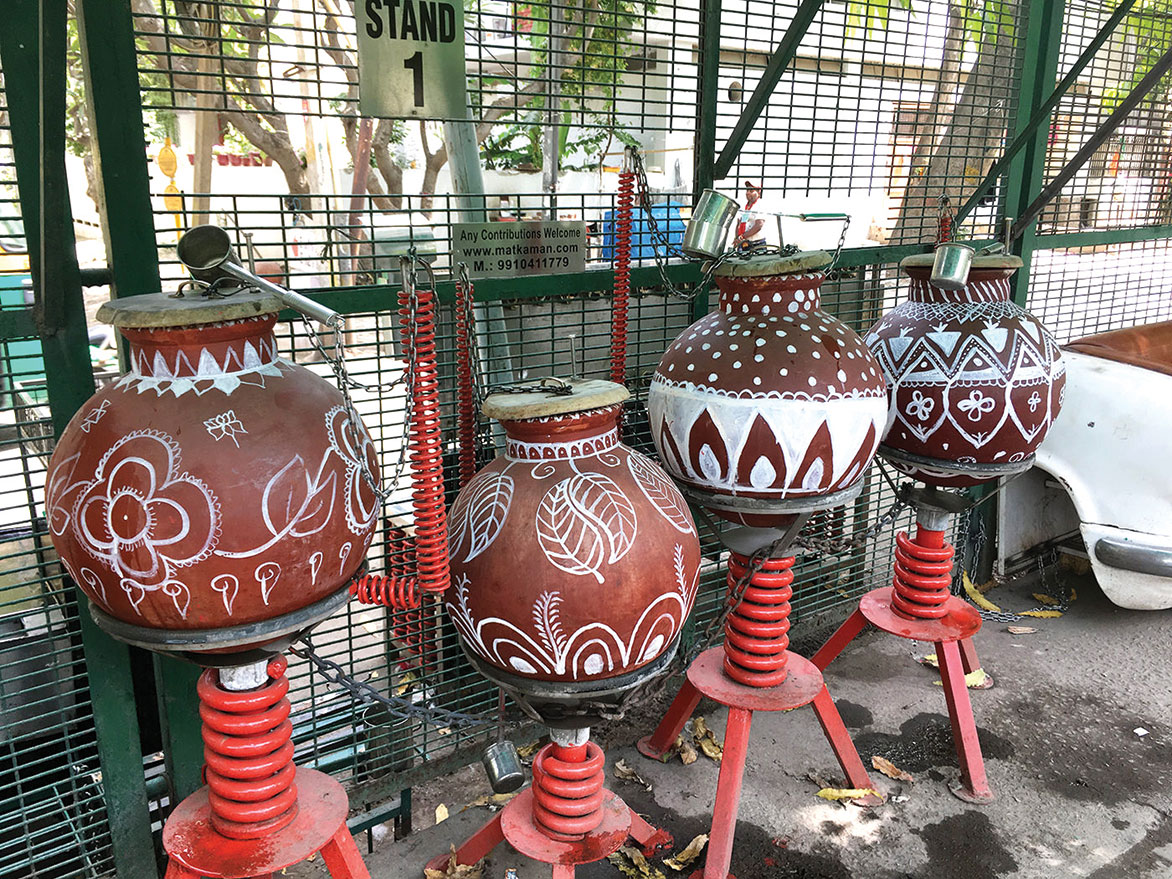 He hopes he can access potable water from the Delhi Jal Board (DJB) soon, but, so far, he hasn’t been successful in convincing the DJB officers. “I don’t have the time to chase them,” he says.

Two years ago, his daughter Natasha, a London-based graphic designer, gifted him a website. She called it matkaman.com, and the name stuck.

Natarajan is disappointed and a little angry that not much has been done for the poor by people who can really afford it. “You take a look at my neighbourhood—most houses have three or four cars each. They can do a hundred times more charity than me,” he says.

Not that people, especially youngsters, haven’t come forward. For instance, Deepti Gaur, a final-year student of fine arts in Delhi, met him two months ago and offered to paint some of the matkas. Natarajan agreed instantly. “He does so much without expecting anything in return. I thought I could do my bit,” says Gaur. She has painted several pots using Madhubani and Warli motifs.

Having lived in India for over a decade now, Natarajan feels he has finally found his calling and goes to bed feeling content every night. His latest venture is serving nutritious food to underprivileged school children. His bread and omelette eatery, close to his home, starts service at 7 a.m. Anyone can buy a plate for ₹20, but school-going children get it for free. “I found out that several poor children go to school hungry as they leave their homes very early. I thought I could help,” he says. The eatery serves jaggery with every plate for added nutrition. “I just want to serve the needy. That will be the central theme of whatever I do,” he says.