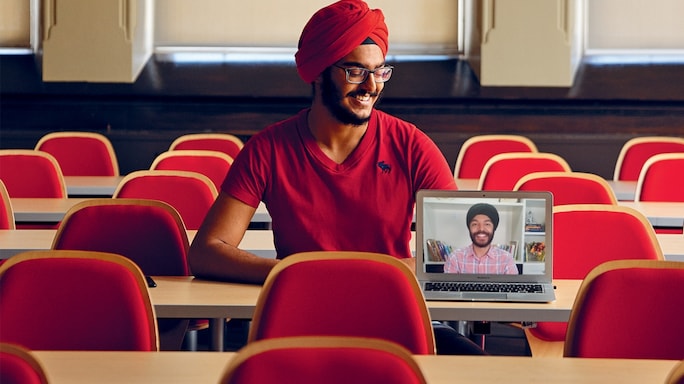 Five Years Ago, Abhay Singh Sachal and a group of his Grade 10 classmates at Seaquam Secondary School in Canada’s Delta, British Columbia, made their first video call to the Arctic. On the other end of the line: Abhay’s 23-year-old brother, Sukhmeet, a volunteer teaching assistant, and his class at East Three Secondary in Inuvik, North-west Territories. The conversation started with typical teen small talk—asking each other about TV shows, music and school life. But as the teens grew more comfortable, the chat turned serious. Students in Inuvik detailed the legacy of residential schools on their families, including stories of alcohol abuse and suicide. Seaquam kids shared how they felt helpless to do anything about the threat posed by the climate crisis.

Soon after both groups said their goodbyes, the brothers had an idea: what if the conversation, meant to expand the students’ perspectives about life outside their hometowns, didn’t have to end?Students across the country, they figured,could continue to benefit from bridging geographical and cultural differences.They called their organization Break the Divide. Today, it facilitates conversations and coordinates community action between youth all over the world. “It all starts with empathy,” Abhay says.

The students at Seaquam used social media to spread the word about their mission to create eye-opening conversations. Other schools began reaching out, and Break the Divide helped them to start their own chapters, providing resources, such as a list of guiding questions to get the conversation started, and technical tips for video calls. Individual chapters are encouraged to connect with each other based on common big-topic interests, such as mental health, truth and reconciliation actions, and climate change. There are now over two dozen Break the Divide chapters, located across Canada and at schools as far-flung as Taiwan and Bolivia.

A few years ago, students in Cape Town, South Africa, formed a chapter.They wanted to talk about their local water crisis, which had reached a critical level. Meanwhile, students at Abhay’s school were interested to learn more. After their conversation, Abhay’s classmates started a campaign challenging people to conserve water as though the Cape Town crisis were their own. “It goes from little conversations,” says Sukhmeet, “to the big ones.”

Maryam Haroon knows first-hand how powerful that change can be. She joined her school’s Break the Divide chapter, as a Grade 10 student in Surrey,British Columbia. Haroon says talking to youth around the world pushed her to gain perspectives beyond those offered in a traditional high school curriculum.She eventually became her school chapter president and organized two mental health awareness events, focusing on the challenges of isolation and depression—especially relevant during the pandemic. Now 18 and a student at the University of British Columbia, she continues to volunteer for the organization. “I envision Break the Divide as a new kind of social network,” she says.“It’s a platform that empowers people to connect and then do whatever they’re passionate about.”

Last year, Abhay and Sukhmeetsecured funding from Canada SummerJobs to hire their first employees,enabling them to develop an app that will act as a social platform to connect Break the Divide chapters worldwide. Their plans of expansion include reactivating the India chapter, which had become defunct due to COVID-19.

“There are so many divisions within India—religious, cultural, geographic. All these different things are heightened by certain forces,” says Abhay. “Our model of taking people from disconnect to empathy through conversation, and helping people use that empathy to create local action is absolutely a model that can serve to solve many of the challenges India faces today."

Hundreds of conversations later, the brothers are still optimistic that the core principle of Break the Divide—empathy—can play a central role in how youth tackle the issues that matter most to them. “I hope that we can be part of creating a world where we are all listening to each other,” says Abhay. “Listening with an intent to learn and to change.”

—WITH INPUTS BY NAOREM ANUJA