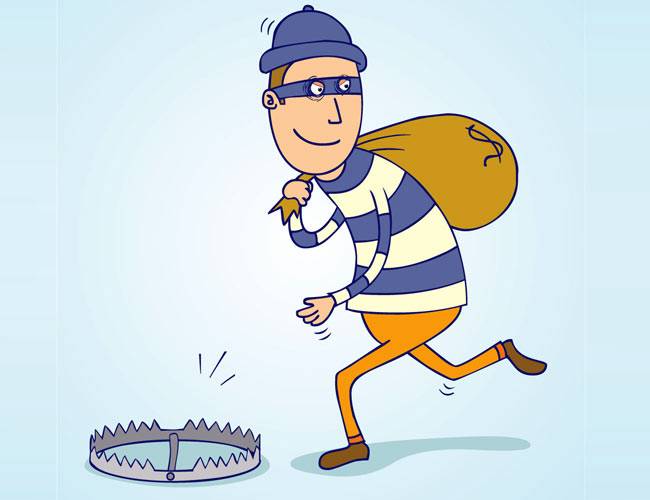 Mumbai resident Altaf Qureshi had just made off with the handbag of a lady he'd spotted dozing in a railway ticket counter queue. Now the proud owner of the booty-a cell phone, necklace and some cash-he only thought it polite to answer his newly-acquired phone when it rang. At the other end was the lady Qureshi had robbed, and she made an enticing offer: "Keep everything else, just return my documents," she said. "I'll pay you Rs.1,000."

The genius master criminal couldn't believe his luck. All set to rake in some more cash, he reached the designated spot-only to find some plain-clothes cops waiting. The police sent off the lady with well-deserved praise and took Qureshi into custody.

ONCE YOU SET UP a business,marketing it is only obvious. A gang of three professional shooters in Allahabad decided to build their profile with a blitzkrieg of publicity: they actually circulated smiling, gun-toting photographs of themselves in the crime world and to further substantiate their expertise, CVs of their felonious deeds were added to their publicity campaign.

The ingenious modus operandi came to light when the police busted the gang. The trio--Ajay Yadav, Rakesh Kumar and Neeraj Singh--said the portfolio helped establish their credentials with prospective clients.

DURING A ROUTINE security check, the local crime branch officials of Ahmedabad rounded up Devendra Singh, alias Devanand, when he couldn't produce documents for the motorbike he was riding. When the suspicious-looking 23-year-old was frisked, out came a diary that belonged to the owner of a motor-winding unit in the neighbouring town of Bavla. The unit, along with three other plants, had been burgled a week ago and copper wires worth Rs.42,000 had been missing.

A raid at Singh's home yielded another diary, and this one had the details of his other shenanigans--15 robberies, where the spoils ranged from oil and ghee to two-wheelers and a tractor.

What's worse is that Singh is the son of a retired armyman who had come to work as a security guard in Gujarat. While he left for his village, the son stayed on to chronicle his escapades.

AFTER RANSACKING an under-enovation house in West Bengal's Madhyamgram, a thief got exhausted and wrapped up for the day. Imagine the horror of the lady of the house, when the following morning, she shook her daughter to wake her up and a stranger emerged from beneath the blanket-sporting the daughter's pullover! A warm blanket on a cold winter night, it seemed, had outweighed the treasure he'd spent hours looking for.

Fighting a hangover, the man couldn't recollect how he'd landed up there and tried to flee. But the masons kept him from escaping until the police arrived.

Crime Speaks for Itself

MUMBAI'S SUBURBAN RAILWAY premises were Nandu Tayade's favourite haunt, until the Government Railway Police caught him. Having committed several thefts, Tayade's most recent haul was of Rs 1.12 lakh he'd stolen from a lady in the queue at the booking office. During interrogation, Tayade pretended that he was deaf and dumb in a bid to seek clemency. When he wrote down the name of his village in Jalgaon district, the police took him on a trip home. He continued to pretend before his wife and children that he could neither hear nor speak, but when the police approached his neighbours, they gave him away. Tayade confessed to his crime later.

Out of the Frying Pan…

WHEN A CHAINSNATCHER was caught in Kurnool in Andhra Pradesh, he first tried to pull off a tear-jerker, saying he stole for the treatment of his ailing mother. When he still ended up at the rural police station, he continued with his pleas from behind bars. And when that didn't help either, he had a brainwave.

He asked the sentry guard if he could use the loo. When he didn't return for a long time, the guard smelt a rat. He went to check the backyard, only to see the thief atop a tall tree. Now it was the guard's turn to coax the thief who was in no mood to listen. Off he jumped to the other side, letting out a victory cry.

The thief, however, had to come back to the police station within minutes-he had fallen inside an adjoining jail compound.