It Happens Only In India| Wedding Bells At 84!

It's never too late in the land of surprises Matrimonial advertisements in India can make for excellent comedy. But this one is truly special. This July, an 84-year-old man’s candid description of his personality and habits in a matrimonial ad gained attention on social media. 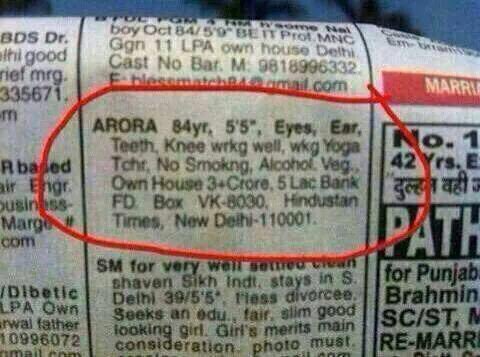 The hopeful groom described himself as a yoga teacher, whose ‘eyes, ears, teeth and knees are working well’. He also expressed his reservations against smoking and alcohol.

The candidate then outdid himself in the honesty department, when he mentioned his bank balance and the cost of his house (Rs 3 crores). While netizens were appreciative and supportive of his endeavours, we are yet to know if the ad led to a suitable match.

Do You Like This Story?
5
2
Other Stories
Please enter valid text
corona updates
Must Reads
Latest Issue