The Things We Do For Love, A Very, Very Truthful Five-Year Old 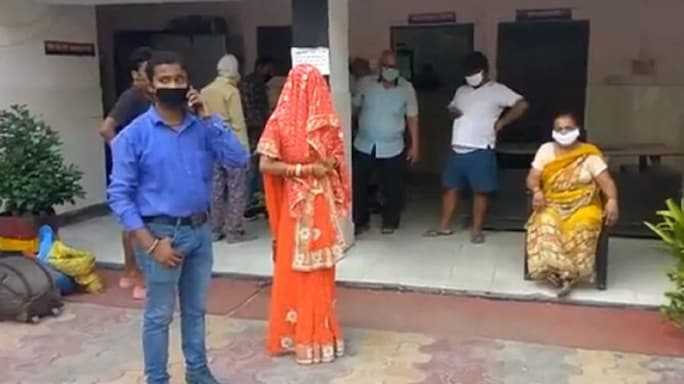 Guddu went to buy groceries and came with his wife. Here, picture (in blue) with his wife (beside him) and his mother (seated) (Photo: Twitter)

Love in the time of corona

All the world loves a lover? The Tiruvallur District police will disagree vehemently, given that their drone interrupted a couple’s romantic sojourn. The couple sneaked out to a forest near Gummidipoondi in Tamil Nadu on April 24, defying lockdown restrictions for their daytime tryst, only to be rudely interrupted by police surveillance. The couple upon spotting the drone covered their faces and made a quick getaway on the man’s bike.

The Thiruvallur district police isn’t impressed, “We have noted the bike's registration number. We will track down the errant couple and take legal action on them. In case this tale of romantic adventure inspired more young hearts, the cops added, “We have intensified surveillance with drone cameras. People should stay inside homes and obey the law." To paraphrase the bard, love is not love if it admits impediments; national lockdown laws included.

The things we do for love

India’s lockdown laws only permit movement to stock up on essentials, does a wife count as one? Guddu from Ghaziabad, Uttar Pradesh will agree, but his family, particularly his mother will say a resounding no. Twenty-six-year-old Guddu, went out of his home on the pretext of buying rations and came back with his bride, Savita. The couple had gotten married in secret at an Arya Samaj Mandir in Haridwar two months ago and are still awaiting their marriage certificate, which has been stalled due to the lockdown.

To add to this strange turn of events, the groom’s mother refused them entry to the house, “"I had sent my son to do the grocery shopping today, but when he returned, he came back with his wife. I am not ready to accept this marriage," the teary-eyed mother told ANI. Oh, the things we do for love!

The kids are alright

You can always count on little children to tell the truth, however damning, they may be. A 5-year-old boy from Thathari Mohalla in Gurdaspur district, landed some adults in trouble with the law by doing just that. He was on his way to his tutor’s home with his uncle and his sister, when they were intercepted by the police. When his uncle was intercepted and questioned by Batala city’s Deputy Superintendent of Police, Gurdip Singh, on where they were headed amid lockdown restrictions, the child played angel of truth and promptly told the cops his tutor’s name and led the charge to her house. In the video that later went viral, you can see him knocking on her gate, sweetly calling out her name. He didn’t stop at that, while his tutor was denying giving tuitions to the cops, he added that three other children normally join him for tuitions. Now, we know kiddo isn’t going to be this teacher’s pet anytime soon.