My War On Insomnia 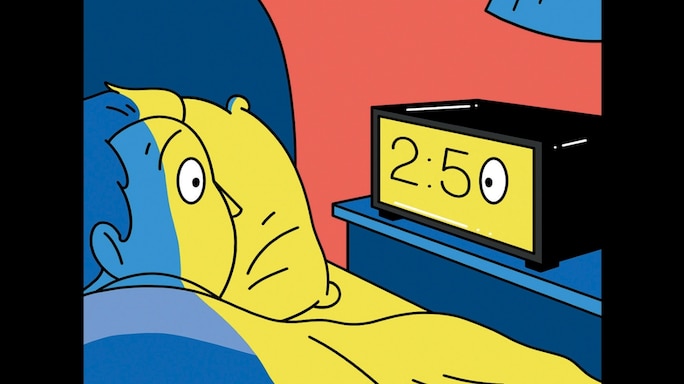 A couple of years ago,the British government considered issuing official guidance telling people,of various ages, how many hours’ sleep they must achieve. This would have been a mistake. Didn’t they realize the reason people can get enough sleep is because they are so worried about getting enough sleep?

Already I spend most of the night in fevered calculation. “It’s now 2:20 a.m. and I went to bed at11 p.m., which means I’ve only had three hours 20 minutes’ sleep, and since I’m meant to have eight hours,that is a deficit of …”

For someone who is bad at arithmetic, this calculation involves the mouthing of numbers, the use of fingers, and the reciting of barely remembered multiplication tables,so much so that by the time I'm finished it is 15 minutes later,and I must start the whole calculation afresh.

Meanwhile, I don’t know what to do with my arms. Once you get into bed, you seem to have too many of them. I scrunch one under the pillow, pop another up over my head and still have a third and a fourth with nowhere to go. If there were a way of making them detachable, I might have a chance of nodding off.

The pillow, too, is all wrong.It’s too thin, but if I fold it double,it’s too fat. A scrunched-up arm,plus pillow, is about right, especially since I have arms to spare, but then my elbow goes numb and my head gets too hot.

I turn over, replacing the numb arm with a fresh one, which means I'm now facing the clock. Why do they make alarm clocks with such large, illuminated numbers? Couldn’t the government step in with some regulations on clock illumination?

My God, mental arithmetic is difficult. How do people do it? Perhaps I should assume it’s already 3 a.m. and the alarm is set for 7 a.m., that’s four hours, right?I check my calculation, counting out the numbers on a spare set of fingers,which I find at the end of one of my spare arms. Correct! Now add the 10 minutes and the 15 minutes, which is 25, plus the three hours and 20 minutes I’ve already enjoyed …

I’m halfway through the computation, when I discover I need to go to the bathroom.

I heave myself out of bed, and trip on my boots, which clatter across the floor, awakening Jocasta sufficiently that she issues a sleepy proclamation that, if I insist on having a wee, she’d prefer me to sit down during the process to avoid what she calls “accidents”.Mustering my dignity, I stumble down the hallway and carry out her instructions which—while they might sound emasculating—do, as I understand it, reflect the cultural norms in Germany, where apparently it’s common for men towee sitting down.

I’m still awake at 3:45 a.m. and need another wee. This time I refuse to sit down. I realize this is grounds for a dispute to take place later this morning.

Back in bed, I adopt the foetal position, my various arms tucked in like origami. I wonder why my body, which feels fine during the day, descends to fresh levels of decrepitude at night. Maybe, I'm thinking, I should start taking fish oil supplements to help my hip,which is now aching, besides which they say it’s good for your brain,but then again, if fish oil was so great for your brain, why aren’t fish smarter?

It’s 4:15 a.m. and I am way under my required eight hours.According to a draft of the British government's advice, “failure to sleep between seven and nine hours a night is associated with physical and mental health problems, including an increased risk of obesity, strokes, heart attacks,depression, and anxiety”.

Oh, my God, I’m too young to die.But then again, I start thinking,what would the British government know, a dysfunctional rabble of self-servers and charlatans who decapitated their own economy with Brexit, a fantasy of backwardly-looking nostalgia?

I decide their advice on sleep is not worth taking. Besides which, it's so close to dawn, it’s pointless to attempt getting any more. I put aside their warnings and relax.

The alarm wakes me at 7:15 a.m.I don’t feel too bad. I’ve somehow survived another night.

I turn and look at Jocasta, who is lit by the early morning light.It does make me wonder how she'd cope without me, should the British government—one day—be proved right.

Perfectly well, probably. The bathroom floor would be cleaner,for a start.

This column was first published in the Sydney Morning Herald.