Millennials, Where Are Your Manners? 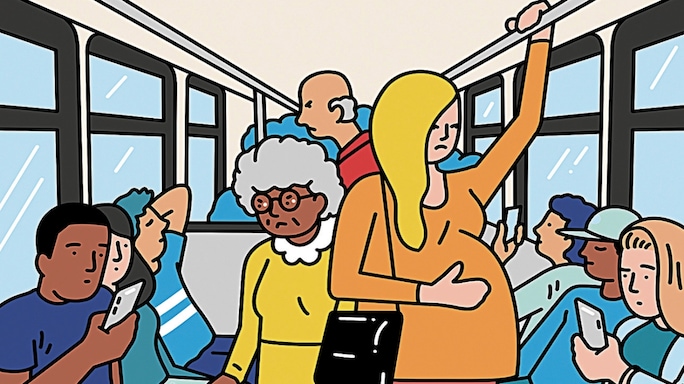 Recently, I was standing at a city intersection with a gaggle of others, waiting patiently for the light to turn green so that we chickens could cross the road. Suddenly, a young woman chatting on her phone bounced past us all and stepped into the intersection just as a car came along. One of the waiting pedestrians called out to warn her,and she swung her head around and snapped in our direction: “Do you mind? I’m on the phone.” For a moment, we all blinked in surprise,and then we started laughing.

I believe military tacticians would refer to the woman’s behaviour as showing a “lack of situational awareness.” My cat attempting to walk across the stove when I'm cooking would be another example.Or someone ambling backward towards a cliff edge while taking a selfie. But here, might I suggest we have a lack of social awareness as well? Who, exactly, is the one who should ‘mind’? Is it the huddled pedestrians who dared interrupt this person’s call to point out that she was obliviously storming into traffic? Or is it the young lady?

I know it’s a bit of a sport to complain about how rude people have become, but the more I think aboutit, the more it strikes me that the problem with modern manners is precisely this kind of obliviousness.Millennials—that age group roughly between 25 and 40—will step on your feet and then get mad at you for existing in their space.

Once upon a time, social awareness was a given. Superficial niceties like saying “Good morning” or waving to neighbours were gestures of goodwill that kept us aware of one another in public as fellow human beings, without committing too much.

But now, some members of the younger generations wouldn’t recognize you as a human if you stood up in their soup. They’d probably think you were an eco-friendly spoon.

A 2019 study in England found that42 per cent of millennials wouldn’t offer their seat on public transport to someone who is elderly or pregnant.Amazingly, they admitted this to the researchers, apparently without shame. More than 80 per cent think that holding a door open for someone, or saying “please” and “thank you,” is old-fashioned. They are divided as to whether it is or isn’t rude to ignore people on social media.

I can tell I am dealing with a millennial at work when they don’t return my email or phone call, even though they might have initiated the interaction. Or we can be in the midst of setting up a time for a meeting,with one person proposing X day and another suggesting Y, and then …for no apparent reason … 700 years of total silence go by. It’s as if you're a ghost outside the window, waving your arms in futility. Hell-ooooo?You begin to wonder if you dream the whole exchange. Or you start thinking maybe the person has a brain injury and completely forgot they were conversing. Should you alert their family?

But no, because these are mostly young people I speak of. Alert, vibrant, healthy young people who will ask you a question and then literally lose interest in listening to your response within a nanosecond. “Would you like a receipt?” a young shop clerk might ask me. “Yes, please,” I will say.And then she will hand me the bag with no receipt. Never mind a “thank you for your business.” This weird inability to keep a conversation going by email or listen to what others just said reminds me of sleepwalking.

I was recently at a spa with my friend Sheila, and the person preparing our weekend menu asked about food allergies. Sheila said she was allergic to blue cheese (it contains the same allergen as penicillin). But the 20-something woman who was apparently off in the clouds wrote down ‘celiac disease’ and delivered Sheilaa plate of gluten-free muffins that tasted like damp hay. When we tried to correct the misunderstanding, the staffer, reaching new heights of inattention, added ‘blue cheese’ to ‘celiac disease’. Sheila was forced on to a low-carb diet until we left.

I say all of this without even mentioning the troll-like nastiness of social media such as Twitter or Facebook, where wishing people a nice day is like dangling your feet in a pool of sharks. But that just means we have all been experiencing the disconnect between real, three-dimensional space and the virtual space that seems to have stripped the new generation of manners.

We can find our way back to small acts of kindness. Maybe it just takes a new shape. My millennial daughter Clara lost her purse a few weeks ago.She was crestfallen—until she received a message from an Instagram account belonging to a chihuahua named Pee Wee. I am not making this up. Pee Wee’s owner had found Clara's purse, and wanted to return it. She left it on her porch, so the two women never met. Instead, they traded virtual kindnesses: Clara, in her return message, offered to let PeeWee wear the earring that was in her purse as a brooch on his dog coat.

Now, there’s a photo of that in cyberspace. And I’ll take it as a sign of good manners. Maybe some of the etiquette has gone online.

Do You Like This Story?
24
1
Other Stories
Please enter valid text
Must Reads
Latest Issue