Things our country excels at ... NOT! 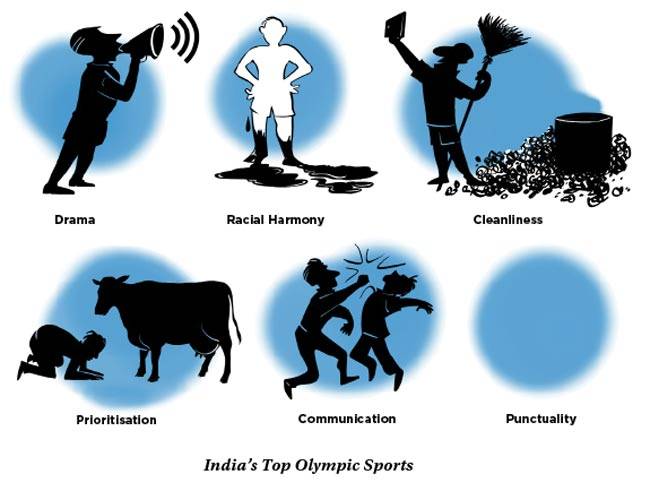 CAR THIEVES WON'T spare anyone, not even patrolling cops. Personnel from the Tamil Nadu Special Police's 13th Battalion parked their van outside the Mandaveli railway station, Chennai, and went about patrolling the area. They returned a few hours later to discover the van missing. They searched and searched, but had to ultimately face the ignominy of lodging a police complaint. Apparently, the theft was made easy courtesy keys left in the car. The van was later found abandoned a couple of kilometres away. Wonder if the thieves returned the courtesy and left the keys for the cops?

NO ONE IS above the law, not even Lord Hanuman. A lower court in Bihar summoned the monkey god in response to an encroachment complaint filed by the area public works department. Apparently, the Panchmukhi Hanuman temple in Dehri-on-Sone in Rohtas district was obstructing traffic. Officials pasted the court order on the idol at the temple, just in case He doesn't really listen.

A MONKEY FIGURED out the perfect way to pull off a heist. It threw a guava into a jewellery store in Guntur, Andhra Pradesh. A staff member kindly returned the fruit, but the monkey pushed open the door and jumped on to the cashier's chair. He then pulled open a drawer and grabbed a wad of cash. The staff tried to take the cash away, but failed. He bounded out and escaped. The staff chased him, but the tricksy monkey was quick. Thank god for CCTVs, at least, they have the thief's description.

GOVERNMENT DOCUMENTS TEND to have a mind of their own. Himachal Pradesh's general administration department issued two newspaper advertisements on 31 May, calling for tenders for the purchase of 14 metres of cloth, at the rate of `50 per metre, for two turbans to be provided to drivers. Turns out, the advertisements were meant to be a letter to a cloth merchant asking for quotations; they were sent to the newspaper by mistake, along with other tender notices.

TIRED OF THE scorching summer, Shivpal Singh of Shajapur, Madhya Pradesh, has sought legal recourse. He has filed a complaint against ShrimanSuryanarayan (sun god), residing in Bhrahmand (the universe), at the Shajapur police station. In his letter, he requests the police to file an FIR (first information report) against the sun, for the unrelenting heat that has been a physical and mental torture. The sun god, he wrote, has also been torturing animals and plants with His fiery heat. Who can we sue for delayed rains?

Do You Like This Story?
20
3
Other Stories
Please enter valid text
corona updates
Must Reads
Latest Issue