Of Matches in Space

What's a bit of spaceball without the customary hour of advertisements? 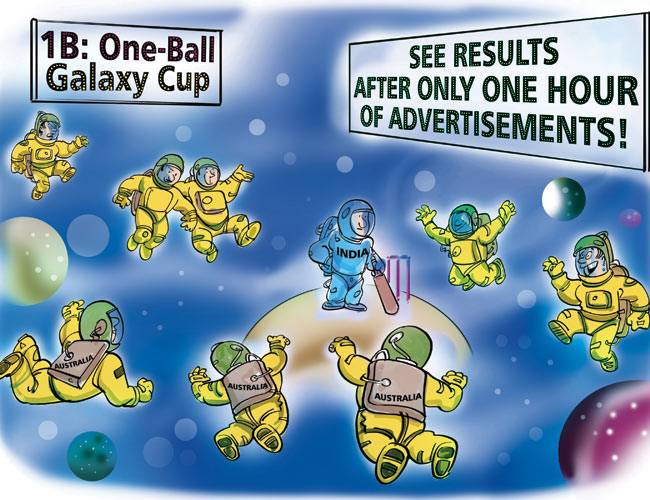 WE KNOW that the divine and bovine are closely interlinked in many parts of India, but we didn't know that the cow's special powers were also admissible in our courts. In Rajasthan's Sikar district, a self-proclaimed seer recently sent a cow and its calf to a local court in connection with a property dispute case so that their statements could be recorded. We'd love to see what the court stenographer actually did then. How far are we from a day when cows stand for elections?

AN UNSKILLED LABOURER who worked as a Salem Municipal Corporation employee was suspended after he covered a statue of the poet Thiruvalluvar. The labourer mistook this statue for one of a political leader, and he had been instructed to cover all statues of leaders in the run-up to the elections. We urge the Corporation's authorities to give the poor man his job back, and ensure that better instructions for statue cover-ups are given in future.

THE SECONDARY education department in Bareilly recently got a taste of an unusual education crisis when all their resources were marshalled to attend the medical check-up of a dog. The dog, a St Bernard, belonged to a principal-secretary-level bureaucrat from the education department in Lucknow. The staff at the institute where it was treated was amazed at the number of bureaucrats present for the entirety of the dog's stay. The dog, it seems, was suffering from a calcium deficiency.

THE MIGHTY ELEPHANT,we know, is the master of the jungle and revered by one and all. However, the Delhi High Court recently upheld a judgement that granted a divorce to a couple. The grounds? The wife called her husband a mota haathi. The High Court said this was destructive of the matrimonial bond. Other details of the case were more serious, and like the elephant, the husband could not forget them.

WHEN LIFE GIVES you lemons, sell them for Rs 39,000. That's what a sacred lemon fetched as part of an auction organized by a temple during the Panguni Uthiram festival in Tamil Nadu's Villupuram district. This is because couples believed that possessing this lemon would lead to prosperity and children. Let's hope the happy winners' ambitions don't turn sour.

OVER 5,000 PEOPLE in Uttar Pradesh's Kaushambi district recently attended a wedding, which was unusual not just in its scale, but also in the nature of the happy couple. The groom, Shagun, and the bride, Shaguniya, both belonged to Pawara, a village in the district. We say 'belonged to' because both Shagun and Shaguniya are dogs. The wedding also featured a DJ, presumably human.

Do You Like This Story?
14
2
Other Stories
Please enter valid text
corona updates
Must Reads
Latest Issue