How the Shiv Sagar-style pizza got a raw deal

It’s a sin that we’ve stripped the humble desi pie off its ‘Indian pizza’ label and dished it out to overly commercial big-brand fare. 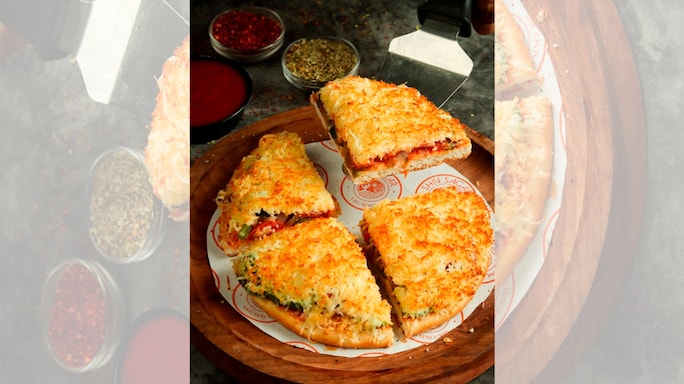 This epic exchange from the popular Hindi sitcom Hum Paanch, between one of the five titular daughters and the family’s house help, dates back to 1995. While the show wrapped up years ago, the great Indian fascination for this cheesy Italian dish still lingers, never mind one’s social, financial, health, or #travelgram history.

The ‘pizza’ the women referred to in the show was sure to be the good ol’ Shiv Sagar version, ordered in from an outlet called Hotel Sridevi. At the time, fast-food chains hadn’t quite mushroomed in Mumbai. Little wonder then that scores of us desi millennials lost our pizza virginity to this modest variant.

Yet, the fairly recent Indianized version—the paneer tikka pizza—made the cut in a recent Google Doodle interactive game celebrating pizzas from around the world. Despite my penchant for paneer pizzas, I found this pick pea-brained and far from palatable.

The reasons for my panning knead—er, need—a flashback to my first time. I was all of seven years old when Dad ordered this difficult-to-pronounce dish for our family of four at a packed non-AC restaurant after I asked him the life-changing question we toss at Google now: “What’s pizza?”

It was love at first bite. Think crusty golden bread, colourful veggies (especially the goblin-green capsicum), and an intricate spider-web of grated cream-white cheese. The delicacy was smaller than a Frisbee but proved to be a big superhero for the senses.

“One more,” I wanted to insist. But tureens of orange-gravy veg food waited to be finished. Though that first date ended abruptly, Dad ensured we binged platefuls of our new favourite dish in every second outing. I still remember devouring toothsome finger-sized triangles off a disc at a local restaurant (coincidentally named Shreedevi) like it was yesterday.

It was a good, wholesome relationship. Until that fetaful—err, fateful—day in 1996. The film Home Alone was airing on TV. The McCallister family was bonding and brawling over a different kind of cheese pizza. It was huge, and I was smitten. Each triangle had twice the surface area of the regular one. Instead of hard-set, it looked soft and pliable, with the cheese about to slide off like Wile E. Coyote from a cliff. The cheesy top looked reddish-orange—just a few shades adjacent to Donald Trump’s sunset hue—and peppered with black olives. While I continued my trysts with local pizzas, over time, my inner Kevin McCallister craved this smokin’ hot version.

The god of good food soon delivered their blessings. A new ‘pizzeria’ popped up in our neighbourhood, offering a range of heavenly international-style pizzas. I couldn’t wait to dig right in with my sister—my partner-in-food-crime—but the sky-high prices left my dad outraged and us siblings sans satisfaction.

Things looked up when an uncle visiting from the US played Santa by taking us to another new neighbourhood pizza outlet next Christmas. As it turned out, the Home Alone-like pie I so lusted after turned out to be one large-sized disappointment. The veggie-and-cheese pizza, while indeed huge, had an unpleasantly fat and doughy crust. The cheese was a joke, as I couldn’t taste any of it. The final deal-breaker was an absence of ketchup, which would have redeemed this unappetising pizza.

Despite these unforgivable sins, I justified the pizzeria. We should have ordered another variant, I told myself. Perhaps, a non-veg or plain-cheese one. Love had made me blind, and I was giving the apple of my eye plenty of chances. Melting before my pleas, Dad later ordered another veggie-loaded offering for us from the same outlet. Not only was it average in taste and texture, but my sister got sick, too!

And yet, through it all, I still pined for those delectable Home Alone-type pies. My stomach wasn’t nettled by the pizzeria’s offerings (even though my taste buds were). My friends frequently relished them without any upsets. And my then celebrity crush lustfully endorsed the brand on TV adverts, too.

The yearning didn’t last long, though. Soon, I was in college, which meant pocket monies (yaaas!) and frequent days out with pals. More pizzerias opened for business, and I tried as many veggie and cheesy pizzas as I could afford. My various jobs led me to an assortment of pies, in the city and outside, even abroad. Sis had begun digesting even the roughest Ch-Indian fare. And our parents had no hiccups either.

But over time, I got honest with myself. While the humble Indian pizza isn’t as epic as its international counterparts, it easily won the taste test, even before all the cheese-topped Margheritas I’ve downed. To test my thoughts, I ordered a desi mushroom pizza from a local eatery while penning this piece. No, it wasn’t epic, but it was simple, satisfying, and paisa vasool (value for money). And it had cheese. Tons of it. It felt good to come full circle.

My search is still on for the best Italian, New York, Chicago, and paneer tikka pizza. But the old Shiv Sagar-style ‘phheetjaa’ will always remain special for me. I hope it gets its rightful place in hearts, plates, menus and video games alike.

About the Author: Priyanka Agarwal is a Mumbai-based screenwriter, author, blogger, and an incurable #bollynerd. Her first book, PiKu & ViRu: A Fan-Actor Drama, is out now on Amazon.