COVID Who?-Lockdown Violators Are At It Again!

It happens only in India: What could possibly be worth risking oneself and others to a deadly virus for which there’s no cure? A festival, a wedding and morning walks seem about right 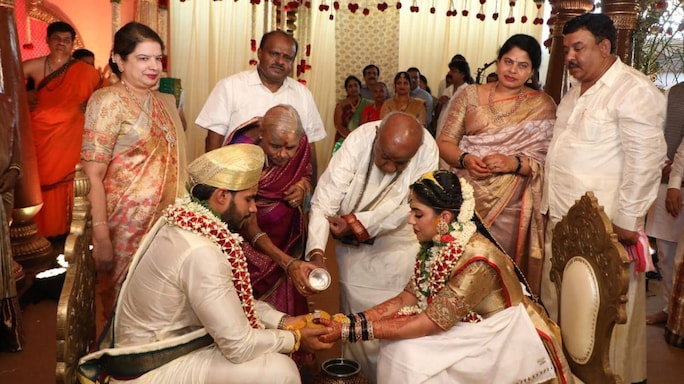 Nikil Ramaswamy's wedding to Revathi in the middle of the coronavirus pandemic raised quite a few eyebrows on social media. (Photo: India Today)

For more than a few months now, the global phenomenon, Man v/s COVID-19, has been all people can talk about. PSAs, healthcare organizations and every content distributor including carrier pigeons, have been spreading the word about the deadly novel coronavirus and how to avoid catching it. Some people however, clearly don’t seem to realize that this show has zero ad-breaks.

On 16 April, hundreds of citizens of Chittapur village in the Kalaburagi district of Karnataka collectively decided that social distancing is simply too passé when the Siddalingeshwara fair is on. Instead they chose a different slogan—keep calm and heave! This religious festival involves a chariot-pulling parade where dozens of men stood shoulder-to-shoulder tugging a five-storey chariot amidst a huge gathering of delighted onlookers. The fact that Kalaburagi has been designated a COVID-19 hotspot, and enjoys the added distinction of being the location of India’s first COVID-19 death seemed to do little to dampen the spirit of the occasion. As for social distancing norms and quarantine protocols advised by the World Health Organization, Chittapur folk say, who?

But wed they must

A wedding is a big deal, and Indians know this well. Then again, so is contracting the highly contagious SARS-CoV-2 virus, resulting in the mandate that everyone self-quarantine and keep at least six feet away from each other when in public. But the guests attending the wedding celebrations of Nikhil Kumaraswamy, son of former Karnataka chief minister H. D. Kumaraswamy, did not seem to mind, perhaps since all guidelines regarding coronavirus-related safety were to be strictly followed.

Major changes were made to the original plans to accomplish this—the event was to be in an open ground but that was changed to a large farmhouse; the initial invitee list had a headcount of 5,00,000 but that came down to a mere 100 and was made a closed-door event; the traditional wedding ceremony was scaled down, now involving only the bride and groom, priests, family members, photographers, videographers as well as supportive guests gathered around watching fondly from the sidelines.

Perhaps the virus understands that masks and gloves would ruin the wedding trousseau and that social distancing doesn’t make for great wedding pictures and steered clear out of respect for the happy couple and their illustrious family.

The police have certainly had their hands full with people who continue to venture outdoors regardless of the lockdown mandates issued by the government. The uniformed men in Pune’s Bibvewadi area were particularly exasperated by the consistent defiance and decided to try a new form of punishment far more gruelling and taxing than any other—exercise.

On Thursday, a group of morning walkers found themselves in for far more fitness than they planned for, when the Maharashtra police interrupted their sojourn by making them do surya namaskar in the middle of the road. If that doesn’t teach people to follow the rules, may we recommend planking? Side benefit: It’s great for core strength too.