A Mask Made Of Gold, Negative COVID-19 Test Results For Sale And Sexism 101

From a man getting a solid gold mask to faking COVID-19 test results to a ridiculously sexist observation by an Indian court, there are some things that can happen only in India 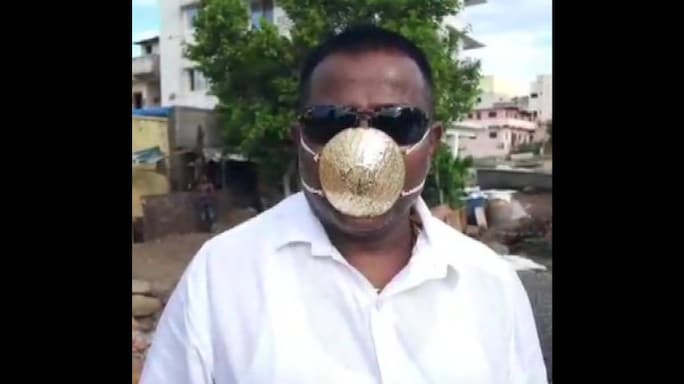 As the COVID-19 infection rate surges higher every day and things turn bleaker, there are some who choose to see, well, a golden lining. Shankar Kurade, a resident of Pimpri-Chinchwad in Maharashtra, is one such man. This corona season, Kurade became the proud owner of a solid gold face mask worth ₹2.89 lakh. Pictures of him looking resplendent in his corona finery went viral, with netizens lapping up the outlandishness. The mask, as Kurade told ANI, is “a thin mask with minute holes so that there’s no difficulty in breathing.” But, Kurade isn’t a man blinded by his love for bling, he does admit that the mask though quite the statement, maybe isn’t the wisest choice—“I’m not sure whether this mask will be effective”, he explained in his statement to ANI. Our two cents: For safety and good health, swap the gold mask for a way cheaper alternative that actually works.

When the price is right

We can all agree, if there is one test nobody in the world wants positive results for, it’s the COVID-19 test. Looks like wishing and praying for a negative result wasn’t pro-active enough for some, and they decided to forge results. Recently, videos surfaced where a group of people are seen offering bribes urging the staff of a private hospital in Meerut, Uttar Pradesh, to fake their COVID-19 test reports and declare them as having tested negative. The staff readily agrees to supply a spanking new negative test result, priced at the lowly sum of ₹2,500. The hospital’s licence has been suspended and a probe has been ordered. A comforting prospect in this rather bleak state of affairs: the hospital staff can be seen in the video promising that the work will be “genuine”. So, he does have a rigorous work ethic, but only if the price is right.

Come rain or shine, misogyny continues to be part and parcel of the experience of being an Indian woman. Justice Krishna S. Dixit of the Karnataka High Court, while allowing the pre-arrest bail of a 27-year-old man accused of rape, decided that he was qualified enough to make a sexist observation about the right conduct of an Indian woman since she had “drinks” with the accused and did not lodge a complaint at the "earliest point". The remarks invited much furore, and the Karnataka state government submitted an application following which the judge expunged the controversial remarks made against the rape survivor.

Do You Like This Story?
13
4
Other Stories
Please enter valid text
Must Reads
Latest Issue