Why the Man in your life won't ever go to the doctor? 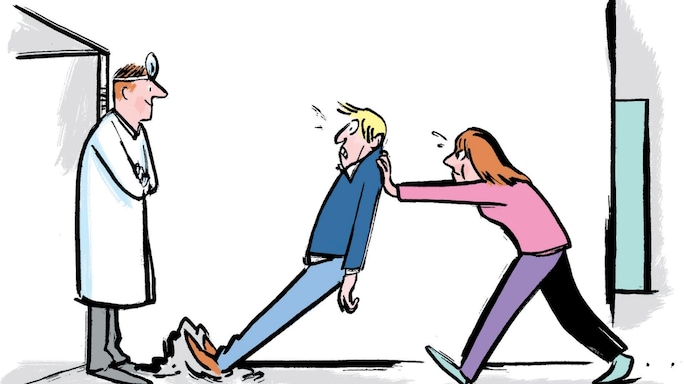 Why, oh why, is it so difficult to get rope bucking, struggling men to see their doctors? Wives, daughters and sisters wish to know! It is an age-old quandary, confirmed all over again by recent research from the Cleveland Clinic in the United States, which reports that 65 per cent of men “tend to wait as long as possible to see their doctor if they have any health symptoms or an injury.” In my house, the scenario generally plays out like this:

“Ambrose, your head is falling off.”

“Well, don’t you think you should go to the doctor?”

Two days later: “Ambrose, your head remains connected to your neck by one sinew. Did you phone the doctor yet?”

“Oh, uh, no. I was going to, but I had to go to the hardware store to get some widgets to fix that old paintshaking machine I found in the basement. It could be useful.”

“Well, why don’t I make an appointment for you?”

“Yeah, okay, that would be great. Thanks.”

“Ambrose, did you go to the doctor this morning?”

“No, I rescheduled. I had to download a live recording of Mike Oldfield’s Tubular Bells from 1973 and it took longer than I expected. There’s something wrong with our server. We should switch providers.”

“So, when are you going to go see the doctor?”

“Well, either next Tuesday, if I can, or I was thinking, maybe, never.”

My husband successfully avoided the dentist for 14 years until his jaw started exploding with pain, forcing him to go for one visit. I had to drop everything to drive him, after which he never went back, preferring to grit his teeth to having one pulled. I have no idea how, but he willed the shrieking nerve into submission. The day looms when he’ll wind up in the dental ER.

Why does he do this? Because this is the manly thing. Even for men who don’t put much stock in old-fashioned masculinity, who happily babysit and bake, as soon as their wives say “Go to the doctor,” they inexplicably morph into tough, leather-faced soldiers who would rather die on the battlefield than open their mouths and say ‘ahhh’.

My father and husband used to get along very well because, well, they were just two fallen-off heads sitting together watching golf on TV. This was before my father got dementia, which I only know by deduction and Googling, since he never went for a test before dying peacefully in his sleep, for unknown reasons.

My mother and I relate in a different way: we incessantly follow developments in health news, contacting each other by email and text with snappy updates, like a pair of FBI agents working a case. She sends me the Harvard University health newsletter every month along with links to articles about new drugs for yeast infections and anxiety disorders and hang nails, while I report to her on what I’ve heard about colon cancer and heart disease and moles. Needless to say, this collaboration went into warp speed during the pandemic. Not that we could use our findings to help the males in our family.

According to the Cleveland Clinic, over three-fifths of men prefer to selfdiagnose, but not by asking anyone else for advice or doing online research—that would be like asking for driving directions. Instead, they just pull muttered suppositions out of the air. “I probably have a 900-degree fever because of that fish I ate at Villa Conti.”

When men do show up at a medical facility, according to the research, a fair number of them don’t tend to even mention ailments to the doctor unless the doctor specifically asks. Which means that they must presumably visit clairvoyants to receive effective diagnoses. Unless, of course, the problem is obvious, like decapitation. Then the doctor might wish to gently point it out. Treatment, though— that’s another quandary entirely.

This has been going on for ages. Way back in 1985 there was a study that found that male testosterone dropped by 50 per cent when they entered hospitals, even for elective surgery. The mere prospect essentially made their privates shrink, as if facing a team of doctors was like wading into an ice-cold river. I was talking to a friend about this when her 21-yearold son wandered into the room. She asked him, “Do you think it’s true that men don’t go to doctors?”

“Yes,” he said, perplexed. “Everybody knows that.”

We laughed. Then cried. It is no word of a lie that my husband has hobbled around our house for the past four months theorizing about having “a touch of arthritis” in his knee until, finally, an MRI revealed that all his cartilage was gone. He is meant to see a specialist next week. “You’ll likely need a knee replacement,” I pointed out. “But these days they discharge you sooner. I read that they implant some kind of pain relief pump into your thigh for a few days.”

I swear to God he’s going to wind up putting off the procedure, even if he’s reduced to crawling around the house, claiming he prefers to move around that way.

Do You Like This Story?
15
1
Other Stories
Please enter valid text
Must Reads
Latest Issue