Watch out for habits that are good for your health but bad for your teeth. 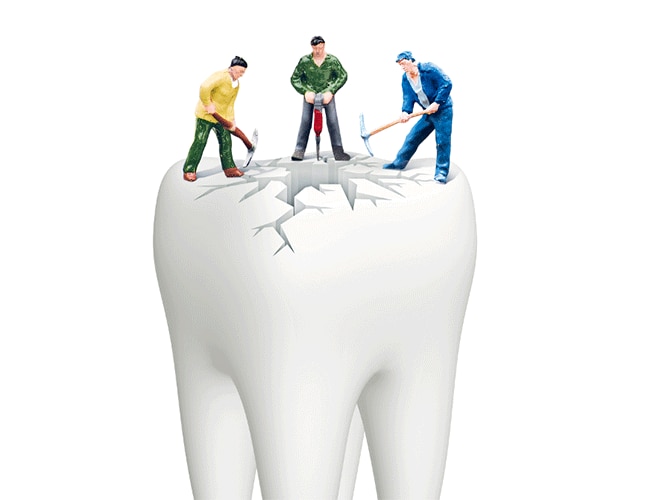 I've always been diligent about brushing my teeth at least twice a day. (Who doesn't love a minty-fresh smile?) But six or seven years ago, I learnt that my technique was sorely lacking. I tended to rush through the job, scrubbing furiously, and after decades of overly vigorous cleaning, my teeth had developed an uncomfortable sensitivity to heat and cold. My dental hygienist explained that the enamel, or protective layer, was wearing thin and exposing the more sensitive dentine underneath. "It's a very typical example," says Dr Euan Swan, manager of dental programmes at the Canadian Dental Association. "A patient is proud of the fact that they're brushing so hard, but they're damaging their teeth." Among her suggestions: brush gently up and down rather than in aggressive, horizontal movements and take your time---at least two minutes.

It turns out there are many oral hygiene practices we believe are beneficial but actually cause tooth damage, resulting in sensitivity and cavities. "Only around 20 per cent of the patients we see in our clinics have 'good' dental hygiene practices," says Dr Suchetan V. Pradhan, head of dentistry at P. D. Hinduja Hospital, Mumbai. Habits such as "using excess toothpaste (a pea-sized amount is usually enough), overuse of mouthwash, (some over-the-counter ones may contain alcohol, which needs to be checked before usage; choose warm water instead), using the same toothbrush for months without changing (opt for soft-bristled toothbrushes and change every month) and using toothpicks or pins to clear debris between the teeth instead of flossing", are some of the common mistakes we make every day, according to Dr Teena Bedi, dental surgeon, orthodontist and implantologist.

When we first develop habits to improve our overall well-being, we aren't always aware of the problems they could cause for our pearly whites. "Teeth tend to be a lower priority in terms of health, so some things tend to get missed," says Dr Mark Parhar, an endodontist in Port Moody, British Columbia, Canada, who specializes in the soft inner tissues of the teeth. Here are seven healthy practices that could be trashing your teeth-and how to stop the damage.

1. Brushing After You Eat

Does your morning routine include grabbing a toothbrush immediately after breakfast? Well done, if you've been brushing regularly, but your timing needs tweaking. When you consume something acidic, like oranges or tomatoes, the enamel temporarily softens and becomes susceptible to abrasive wear. Brushing your teeth immediately after meals will remove enamel and leave your chompers feeling sensitive. Aggressive brushing will only make matters worse.

Exercise caution and wait approximately 30 minutes to brush. "Saliva is a buffering agent and will bring the acidity of the oral environment down, but it takes time," says Gerry (Geraldine) Cool, a dental hygienist in Calgary and president of the Canadian Dental Hygienists Association. Eating certain types of dairy, especially cheddar cheese, can raise the pH inside the mouth and release calcium and other substances that fight plaque; rinsing your mouth with water can help wash away these debris wedged between teeth. You can also brush before eating something acidic instead of after.

You may be diligent about controlling your chronic health condition by taking the prescribed medication as directed. Unfortunately, if you're on any of the hundreds of drugs---including certain antidepressants and pain meds---that have the side effect of reducing saliva flow, your oral health could suffer. "Patients on those medications tend to have a dry mouth, so they're at a higher risk of developing tooth decay," says Swan, "because the saliva isn't there to physically wash food debris away or buffer acids."

In fact, according to the Oral Cancer Foundation, 30 per cent of all tooth decay in older adults is caused by dry mouth. The solution isn't to stop your medication, unless your doctor can offer an alternative without that side effect. Instead, try sipping water throughout the day. You can increase saliva flow with sugarless gum, mints containing xylitol, or sprays, gels and tablets designed specifically for dry mouth.

There are many ways physical activity benefits your body. It helps with cardiovascular health, weight control and mood management, for starters. Participating in impact sports such as hockey, basketball or martial arts, however, can do a number on your teeth if they aren't properly protected. A custom mouth guard (fitted by a dentist) provides a cushion around your teeth in case of an impact to the face. They can be invaluable when there's a risk of physical contact, whether on the field or on the court.

Swigging water with fresh lemon juice is said to help digestion, strengthen immunity and cleanse your body of toxins. "I find it nice as a hot drink in the morning, especially when it's cold out," says 64-year-old Christine Peets of Napanee, Ontario, Canada, who drinks lemon water throughout the day to calm her digestive issues and stay hydrated. She became concerned, though, after her relative---also a fan of the drink---discovered it was weakening her tooth enamel, so Peets checked with her dentist. Lemon water may be a popular trend, but acidic fruit juice is a major culprit when it comes to dental erosion from diet. "Even though you're diluting lemon juice with water, you're still raising the acid level of the mouth. If you sip, and you're doing that two or three times throughout the day over a prolonged period of time, I'd be concerned," says Cool. Drinking quickly is not a full fix, but it's much better than sipping the tart mixture at length; using a straw may also reduce detrimental effects. Check that the water isn't too hot, as warmer temperatures intensify the tooth damage. Cool also suggests having a drink of plain, ordinary water soon afterwards. "Black or green tea, coffee and turmeric (haldi) are also consumed as healthy alternatives to sugary, carbonated drinks (a strict no-no for dental health) but can cause staining of the teeth," adds Pradhan.

Ice is free of calories and sugar, will cool you down on a hot day, is usually pH-neutral and won't stick to your teeth. Isn't crunching ice much more wholesome, therefore, than chewing on candy? Turns out, it has its downsides. "Ice is very hard," says Dr Hendrike van Drie, a periodontist in Maastricht, the Netherlands, and chair of the oral-health working group at the Council of European Dentists. "Chewing on it damages teeth by causing cracks and fractures in enamel and restorations." Van Drie adds that constant exposure to cold temperatures can lead to dentine hypersensitivity.

"I've got a few ice chewers in my practice, and I'm always encouraging them to break that habit. You just don't want to crunch hard things," says Cool. "The enamel is probably the hardest tissue in our bodies, but when there's chronic wear and tear, there's an increased chance that it can flatten the contours of the teeth." Sometimes the wear is severe enough to change the way the bite fits together, triggering pain in jaw muscles. She says ice can be nice, but only if you let it melt in your mouth.

It's true that alcohol in moderation may offer benefits, including reducing the risk of diabetes, heart attack or stroke. Red wine, in particular, contains compounds that seem to raise good cholesterol and boost your heart health. But if spreading out your drinking means you're nursing a single glass of wine for two hours, your teeth are being constantly compromised.

It's similar to the problem with lemon water. "Sipping wine means an exposure to acid every time a sip is taken," Van Drie says. That's not to say you should chug-a-lug, but do drink water when you're having a glass of wine, or nibble on a piece of cheese to buffer the acid. And note that not all wines pose the same problems for your teeth. "White wine has a higher pH and causes more and faster damage," says van Drie. On the other hand, red can stain your pearly whites. Thinking of switching to Perrier instead? "Sparkling water is also acidic and can harm teeth when drunk constantly.

Fluoridated drinking water is endorsed by organizations such as the World Health Organization and the Centers for Disease Control and Prevention. It's well proven to reduce tooth decay in both children and adults, it's cost-effective and it's safe (levels are low and monitored, and it's impossible to drink enough to reach fluoride toxi- city). "However, too much fluoride consumption during enamel develop-ment (occurring in children till the age of six) can lead to enamel fluorosis, a condition in which tooth enamel fails to crystallize properly, leading to defects that range from slight markings to brown stains and surface pitting," says Pradhan.

Hard or soft water also plays a role in oral health. "Hard water typically contains higher levels of minerals such as calcium, magnesium and phosphates, all of which are beneficial for teeth. Soft water lacks such essential minerals for the tooth protection. Hence, it is safer to use hard water but only for mouth rinsing as it may help in the mineralization process. For consumption, however, soft water is advised. Enough evidence is still required to prove the definite benefits of hard water on dental health," adds Pradhan.